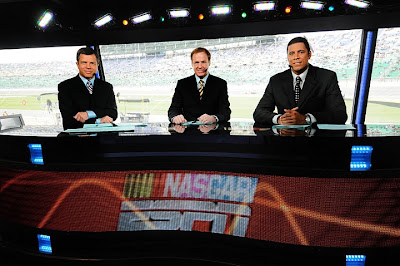 Allen Bestwick will have Rusty Wallace and Brad Daugherty alongside when he opens the pre-race coverage on NASCAR Countdown at 8PM tonight from the Texas Motor Speedway.

Wallace will then move to the broadcast booth to join Marty Reid and Andy Petree for the Nationwide Series race at 8:30PM. Dr. Jerry Punch, Vince Welch, Jamie Little and Dave Burns will be the pit road reporters. Tim Brewer will be in the Tech Garage.

This is a great opportunity for ESPN to showcase the Nationwide Series in primetime on a Friday night. The track looks great and the field is fast. While there will still be a smattering of start and park cars, the race itself should be solid.

Reid and Wallace are not the best combination of personalities in the TV booth. Reid has very little NASCAR experience and Wallace is not the type of person who can help out his play-by-play partner.

Once the race is underway, the role of Bestwick and Daugherty at this track is to site and watch. Unless there is a long caution period or a red flag, we may not hear or see too much of the infield team.

TMS is fast and the restarts require two things. First, the TV network has to be out of commercial break so viewers can see the green flag fly. Secondly, Reid has to reset the field as to who is restarting where, what cars took a wave around and who was the lucky dog.

This race should be a good snapshot of where this production team is this season in terms of revamping the disastrous coverage of last year. So far, there have been a lot of changes for the better and hopefully that can continue.

ESPN offered no coverage from TMS except qualifying, which was done from the infield pit studio. Let's hope the pit reporters are up to speed on stories other than just those of the Sprint Cup Series cross-over drivers as we have seen in the past.

Danica is gone and the real racing is different this season. One group of fast cars is racing for the owner's championship while another group is racing for the driver's title. The challenge for ESPN is to update both.

This post will serve to host your comments on the ESPN2 coverage of the Nationwide Series race from the Texas Motor Speedway. To add your TV-related opinion, just click on the comments button below. This is a family-friendly website, please keep that in mind when posting. Thanks for taking the time to stop by. 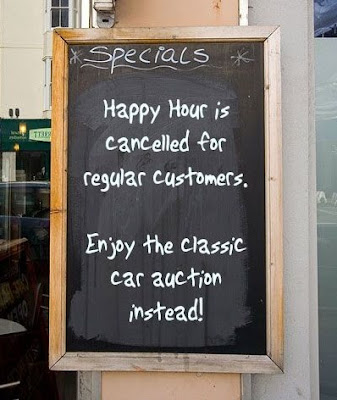 Friday is day two of the TV clash between the Barrett-Jackson auto auction from West Palm Beach, FL and the on-track NASCAR action from the Texas Motor Speedway.

Nationwide Series practice ends at 1:30PM ET and that overlaps with the start of the Friday auction coverage at noon on SPEED. So, neither of the two Nationwide practice sessions will be televised.

Later in the day, Happy Hour for the Sprint Cup Series starts at 3PM but the Barrett-Jackson auction coverage is live until 6:30PM. So, no Happy Hour from Texas for NASCAR fans.

Click here to discover an interesting twist to the auction coverage. The SPEED production is being made available live online for the entire 6.5 hours on Friday. Where can it be seen? At the SPEED website, of course.

It seems ironic that a private company auctioning cars can arrange a simulcast live on SPEED, SPEED-HD and SPEEDtv.com all day long. Meanwhile, NASCAR and SPEED cannot figure out how to offer one moment of Nationwide Series practice or Sprint Cup Series Happy Hour online at either the NASCAR or SPEED websites.

Our friends at Turner Sports Interactive who own the online video rights to NASCAR just recently finished offering an amazing online package of basketball games during the NCAA tournament. This weekend, The Masters golf tournament is also available online for fans who would like to view by computer or smart phone.

There are four more seasons of exactly this type of coverage under the current NASCAR TV/Internet contract. FOX and TNT cannot help because they only carry the Sprint Cup Series races. Until July rolls around and ESPN takes over, the opportunity to provide Sprint Cup Series TV "support programming" like practice and qualifying belongs to SPEED.

Despite protests to the contrary, ESPN has continually given only lip service to the Nationwide Series since 2007 and happily throws them to the TV wolves of college football once ESPN's own coverage of the Sprint Cup Series begins.

The bottom line is that the teams in the Nationwide Series need more help through exposure on TV. When SPEED covers Nationwide Series practice and qualifying, the "regulars" are given strong exposure and all the stories of the day are followed. The teams are all treated equally.

ESPN has never grasped that concept and continues to hound the Sprint Cup Series drivers during Nationwide TV coverage like demented stalkers. Every move is documented as if they are somehow the entire show, instead of being exactly what NASCAR is trying very hard to downplay this season.

Once the Nationwide Series race coverage hits the air on ESPN2, the realistic opportunity for a team of "regulars" to get coverage is gone. ESPN loves stars and when the big boys are playing in the minor leagues, the big boys get the TV coverage.

This weekend NASCAR.com has a slate of press conferences, appearances, chats and video clips. What NASCAR's own official website does not have is any of the live on-track action from TMS.

It seems clearer by the moment that as SPEED and ESPN continue to gather diverse high-profile sports properties, expanding online NASCAR offerings is the only way to continue to make the on-track sessions before the races themselves available to fans.

Marty Reid, Rusty Wallace and Andy Petree will handle Nationwide Series qualifying on Friday for ESPN2 starting at 5PM ET. Mike Joy, Darrell Waltrip and Larry McReynolds will host the Sprint Cup Series qualifying on SPEED at 6:30PM. Reid and company then return with the NNS race coverage beginning with the pre-race at 8PM ET.

We welcome your comments on the topics discussed above. To add your opinion, just click on the comments button below. This is a family-friendly website, please keep that in mind. Thank you for taking the time to stop by The Daly Planet.

We will live blog the Nationwide Series race coverage right here beginning at 8PM. Please join us for TV comments.