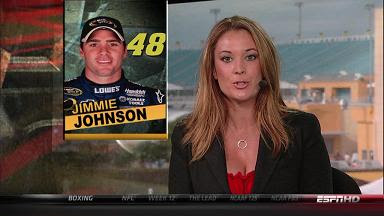 This Memorial Day weekend is busy for motorsports. ABC will televise both the Indy 500 and today's race.

Nicole Briscoe will host the pre-race and anchor from the Infield Pit Center for the NASCAR on ESPN gang in Charlotte. She will be joined by Dale Jarrett and Brad Daugherty. I am told that there may be a special guest as well. The telecast starts at 2PM ET.

Dale Jarrett will be moving up to the broadcast booth where he will be joining Allen Bestwick and Andy Petree. Marty Smith is in Indy working that race on Sunday.

Also in Indy are Jerry Punch, Jamie Little and Vince Welch. That puts Mike Massaro, Shannon Spake and Dave Burns on pit road for the Charlotte Nationwide Series race. Yes, Tim Brewer will also be on-site in the Tech Garage.

ESPN has come along way and this weekend has the potential to be electric. Stories are unfolding in this series as the Sprint Cup drivers are going to be racing in front of the hometown crowd in cars that are intended only to win. No point battles, just racing for the top spot in front of family and friends.

The weather is good, the camera placement is outstanding and SPEED has already shown the Nationwide cars are flying on the track this weekend. This should be fun.

This post will host your comments about the ABC/ESPN coverage of the Nationwide Series from Charlotte. To add your comments, just click on the comments button below. This is a family-friendly website, please keep that in mind when posting. Thanks for taking the time to stop by The Daly Planet.
Posted by Daly Planet Editor at 12:54 PM 57 comments: