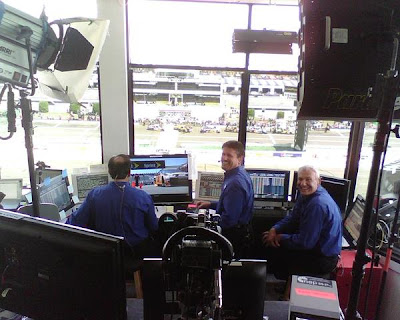 Well now! Just when the fan backlash over the ESPN coverage of the Chase was dying down, the good old NASCAR Fan Council comes along with another double top secret survey. This one pulled no punches.

Here are some of the topics and questions:

Rank the TV networks, Fox, TNT and ESPN/ABC in order of preference for the Sprint Cup Series races only.

How many of the 17 ESPN/ABC races did you watch?

Open comments on what fans liked or disliked about the ESPN/ABC Cup race broadcasts.

ESPN/ABC booth and pit reporters:
Announcers are NASCAR experts
They make the race more exciting
Cover all the drivers
Excellent job explaining strategies
Makes me feel more knowledgeable
Makes the broadcast fun
Are passionate commentators/announcers
Makes me more interested in NASCAR
Does a better job than other TV networks
Too structured and uptight
Always on top of the action
Does the best job covering the race
Never misses important on-track action
Doing an excellent job
Too many on-screen gimmicks
Thrilling camera angles
Captures the sounds of the sport
Covers Victory Lane and post-race in an appropriate manner

TDP has been covering the TV side of NASCAR since 2007. Over that time, we have seen lots of changes in style and personnel. Our discussion about the final seventeen Sprint Cup Series races covered by ESPN/ABC appears to directly mirror the issues addressed in this fan survey.

The NASCAR Fan Council is a group of twelve thousand fans who are not paid, but help NASCAR to gauge a wide variety of topics, including the media. Click here for the column about the NFC asking fans about Digger at the height of the Fox backlash over the animated rodent.

It was amazing earlier this season when NASCAR executive Ramsey Poston blogged about the sanctioning body being upset with ESPN and how the network covered the Talladega race. Click here to read the full post.

Now, we see questions directly addressing issues like the Tech Garage with Tim Brewer, the pre-race show with Allen Bestwick and the event coverage anchored by Jerry Punch. The survey also steps behind the cameras to ask about the mechanical parts of the coverage from pit stops to in-car cameras.

What is your reaction to NASCAR as its online consumer marketing arm brings up topics directly related to the ESPN/ABC Sprint Cup Series coverage?

To add your comments on this topic, just click on the comments button below. This is a family-friendly website, so comments may be moderated prior to posting. Thanks for stopping by and leaving us your opinion.
Posted by Daly Planet Editor at 4:30 AM 39 comments: