Who Should Host The Sprint Cup Series Banquet? 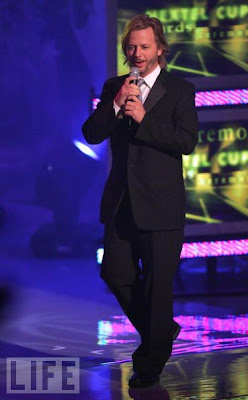 TDP has been chasing NASCAR and begging for information about the big change from New York City to Las Vegas for Champions Week that ends with the Sprint Cup Series banquet. We have not had a lot of luck.

Tuesday, NASCAR issued a media release detailing that the television coverage of this season's banquet was leaving ESPN and moving to SPEED so the evening could be seen live by fans. This is happening only weeks before the event.

While we waited for SPEED to finalize some plans, fans started sending suggestions in about who they would like to see host the evening's telecast. Surprisingly, no one suggested that David Spade return. Instead, there were a wide variety of NASCAR media types, some current television personalities and even some retired TV folks whose names were offered.

Since this big jump from ESPN to SPEED, we can perhaps assume that ESPN's Jerry Punch will not be the Master of Ceremonies for the banquet. That gives us an opportunity to let you read the official information and then tell us what person or duo you would like to see that might spice up the festivities and make the evening more interesting for you as fans.

Here is the news release:

Las Vegas, Nev., is the host city for this year’s Champion’s Week festivities, which culminates on Friday, Dec. 4 with the 2009 NASCAR Sprint Cup Series Awards Ceremony at Wynn Las Vegas.

“With the NASCAR Sprint Cup Series Awards Ceremony moving from New York to Las Vegas this year, there continues to be a great deal of buzz about how things are going to be different,” said SPEED President Hunter Nickell. “So, when the opportunity came for SPEED to be the television home for the event, it was an easy ‘yes’ from us.

OK, now that everything is official, click on the comments button below to tell us who you would like to see hosting the banquet this season live from Las Vegas. As usual, this is a family-friendly website, please keep that in mind when posting and thanks again for giving us your opinion.
Posted by Daly Planet Editor at 10:00 PM 138 comments: 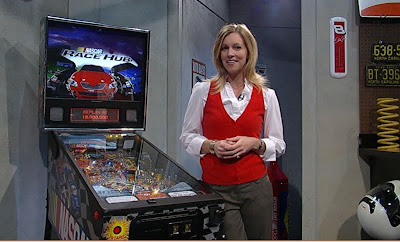 NASCAR fans now have to program the DVR for Mondays. There are now three very interesting TV shows to watch. With only a couple of weeks remaining in the TV season, let's discuss them.

Last Sunday morning brought one hour of NASCAR Now, two hours of RaceDay and one more hour of the NASCAR Countdown pre-race show. Four hours of TV that essentially covered the same stories, originated from the same track and previewed the same race.

By the time the race was run and the post-race shows were finished, thirteen hours of non-stop NASCAR TV had been on the air. No matter how interesting the stories, how good the reporters and how exciting the race that is just a lot of TV.

Mondays have become a popular destination for fans who may not have watched NASCAR on Sunday and instead rooted for their favorite NFL team. TV ratings drop sharply when the football season starts and this year has been no exception.

Veteran fans may remember when Allen Bestwick was unceremoniously dropped from his Monday night show on SPEED. Along with Johnny Benson, Bestwick was sent right out the door without a proper goodbye and without a shred of dignity. Perhaps, some TV viewers shared my opinion that Bestwick was the foundation of that show. His tough but fair hosting allowed Michael Waltrip, Kenny Schrader and Benson to do what they do best. That is talk about racing and goof around.

Now, years later, Bestwick has taken over ESPN2's failing Monday night version of NASCAR Now and built it into a powerhouse. After a year of mixing the panelists, Ricky Craven and Ray Evernham have become the new "expert panel." Adding Randy LaJoie or Boris Said makes for some laughs, but the information comes from the duo of Craven and Evernham.

This hour is tightly structured, but Bestwick seems to be slowly pulling that back to allow for more free discussion among panelists. ESPN's mindset these days is glossy perfection and NASCAR just does not fit that mold.

Evernham especially has proven to be a great source of knowledge on racing specifics, including the new cars and technology. Craven is honest and upfront about his own history in the sport. This team is absolutely what ESPN is looking for in polished and well spoken analysts who look comfortable in a suit and tie.

The new wildcard on the TV screen is SPEED's Race Hub. This Monday through Thursday thirty minute show appeared out of thin air the week of the NASCAR Hall of Fame induction announcement. To say it was thrown together is basically accurate.

Now, several weeks later, things have taken a turn. NASCAR owners, drivers and sponsors have discovered that a short drive to the SPEED studios can put them on national TV live at 7:30PM. Monday's show featured owner Todd Braun and his new Nationwide Series driver Brian Scott announcing their partnership in a conversation with co-hosts Krista Voda and Randy Pemberton.

What SPEED is doing is capitalizing on the one weakness of Monday's NASCAR Now. That show originates from Connecticut, while SPEED is right down the street from the Lowe's Motor Speedway and near almost all the NASCAR team shops.

Now that the secret is out, this week already features Ricky Carmichael, Martin and his brother Ryan Truex together and a slew of the NASCAR regional racing champions. There have already been a mix of Sprint Cup, Nationwide and Camping World Truck Series drivers on the previous shows.

Race Hub has a very good reason to gravitate toward these guests and interviews. They are followed by one hour of highlights and race discussion on This Week in NASCAR. That is a franchise for SPEED that the network is trying to restore to a dominant position on Monday night.

Steve Byrnes has settled in as host with his sidekick and show veteran Michael Waltrip. Around this duo swirls the alternating panelists Chad Knaus and Greg Biffle. Recently added for the Chase was SPEED veteran Jimmy Spencer.

The result has been a show that is as fun to watch for the interaction between panelists as the content. Waltrip has changed completely from his original TV persona and is now a staunch NASCAR supporter. This new owner/driver viewpoint drives Chad Knaus crazy, makes Greg Biffle squirm and often confuses Spencer.

Byrnes pushes the panel through the race highlights, introduces some features and then offers a preview of the next race. Along the way, topics pop-up that would never make it to the NASCAR Now screen. The lure of TWIN is the potential for spontaneous combustion at any moment.

Can you share with us what shows you watch and why? We have a very diverse group of readers at TDP. Our interest is how you select the Monday shows to view and what you like or dislike about them. To add your opinion, just click on the comments button below.

Please remember, this is a family-friendly site so we appreciate your comments being offered without hateful speech or derogatory language. Thanks for taking the time to stop by The Daly Planet.
Posted by Daly Planet Editor at 7:00 AM 62 comments: