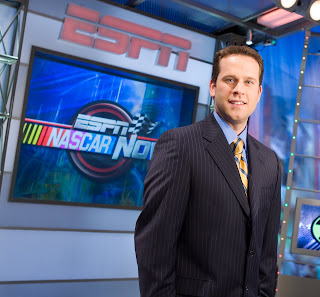 The Tuesday edition of NASCAR Now had wrapped-up at 6PM when host Ryan Burr simply told viewers he was not done. Without explanation, Burr extended the program by fifteen minutes.

While the first thirty minutes of this show consisted of mediocre scripted content, the best part of the show happened when Burr was released to talk live with Andy Petree and Boris Said. Burr is an ESPNEWS veteran and one of his strengths is working live in an interview setting.

Boris Said was on the phone and proved to be a big asset to the extended telecast with his road racing perspective. Said provided a good critique of the Montreal rain race and helped fans to understand the real circumstances with some of the problems the teams experienced. This time, Said really came through in the crunch.

Andy Petree has been working hard this season and has a very good perspective on the inner-workings of the sport as things begin to get serious. As ESPN has learned from the very successful Monday edition of this program, conversation with informed NASCAR veterans is a big hit with the fans. This was a great example.

Tuesday is not a very good day for the NASCAR Now gang and interviews with Ron Fellows and Scott Riggs did not serve to spice-up the program. Unfortunately, Fellows has never been a good TV interview despite being an outstanding individual. A couple of questions to Fellows about his sports car wins might have helped this interview along.

David Newton returned to report that Robbie Loomis and the Petty bunch might run two cars full-time and one car for Kyle part-time next season. Burr tried to hype the tension between Carl Edwards and his crew chief at Pocono, but Newton didn't bite and said it happens all the time. "Good stuff," said Burr. Not really. Burr did not ask Newton about either Ryan Newman or Martin Truex Jr. That would have been good stuff.

After Monday's show with the four ESPN pit reporters, the information in this single-anchor show was lacking. Tim Brewer's Tech Tip was no help since it was information fans had seen before. The opportunity to provide a more topical feature on someone or something going-on in the NASCAR community usually exists on slow Tuesdays like this one.

With little manpower in the Mooresville, NC area ESPN has stepped away from the pre-produced features of last season and instead substituted interviews from the various shops. While this might speak to the news of the day, it does very little to expose NASCAR fans to what the teams are actually doing as they gear-up to travel to Watkins Glen. The lack of "ground troops" in the Mooresville area is hurting ESPN.

Three more shows before qualifying gets underway on Friday should leave a lot of time for NASCAR Now to offer previews of the Truck, Nationwide and Sprint Cup races. This is a very long weekend of racing with a lot of it live on the ESPN and ABC family of TV networks.

If the information comes along about why this show ran long and messed-up the DVR's and TiVo's of NASCAR fans nationwide, we will certainly pass it along.

The Daly Planet welcomes comments from readers. Simply click on the COMMENTS button below and follow the easy instructions. The rules for posting are located on the right side of the main page. Thank you for taking the time to stop by.
Posted by Daly Planet Editor at 6:06 PM 18 comments: