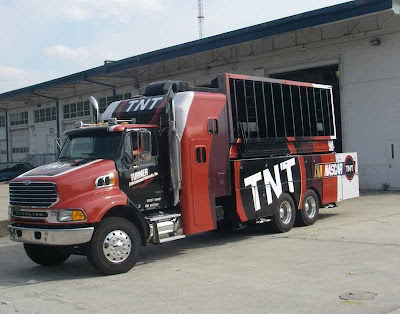 The fan frustration boiled over last weekend with the Sonoma coverage, but it had been building for some time. In a world that technology has altered dramatically, little has changed with NASCAR racetelecasts. Full-screen commercial breaks come early and often.

TV viewers see the racing in disjointed chunks. Announcers are forced to spend time in the racing segments trying to catch fans up on what happened during the two minute and thirty second long commercial breaks. In a word, it's awful.

At Infineon Raceway 143 minutes of race coverage mixed with 52 minutes of commercials to make up the slightly more than three hours of on-track coverage. The good news is that the final TV segment of racing was a long one. TNT also stayed for the first time this season and filled the scheduled NASCAR TV time with post-race interviews.

This week the network moves to Daytona for a Saturday night race in primetime. For the last five years, TNT has been using a new commercial approach to this event they have labeled as "Wide Open" coverage. It could not come a moment too soon.

The thrust of this style of coverage is to recruit a group of advertisers that appreciate innovative TV. That is no easy task. The line-up this year includes Coke Zero, Coors Light, Pfizer, Sprint, Toyota and Warner Brothers Films. In return for getting on board, the advertisers get extended exposure on the air while TNT gets to use a side-by-side commercial format.

Ultimately, TV networks that paid top dollar to NASCAR for these races have to figure out a way to pay the bills. Despite the tremendous changes in online and smart phone technology, TV has basically plodded along trying to use the old method of full-screen commercials, ratings and household exposure.

TNT's goal every year for this race is to not miss a lap of green flag racing. Sure, they have to sneak some full-screen local breaks in for the cable companies, but doing that under caution flag periods has proven to be a tremendous success. That way, only the side-by-side style commercials air during green flag racing.

The toughest task of this telecast falls to Adam Alexander. Instead of simply leading to commercial, TNT's play-by-play guy has an extensive menu of sales features to try and integrate into the live race telecast.

A tremendous benefit during the TNT races has been the online RaceBuddy application available for free at the NASCAR.com website. Once again this weekend, RaceBuddy will offer ten video sources including four in-car cameras. There is also an "iso-cam" on pit road and a battle-cam that follows the best racing on the track.

Between the Wide Open coverage and RaceBuddy, what TNT is ultimately doing is providing race fans a peek into the future. RaceBuddy is now available on iPhones, iPads and android phones with the Sprint Mobile app. The entire live race may have some added TV commercial content, but it will not block the racing action from start-to-finish. That's a pretty nice package.

Today's younger consumers just won't stand for full-screen TV commercials that block live professional sports action. They don't have it with the NFL, the NBA or the NHL. The devotion to brands, drivers and manufacturers that we veteran fans grew up with is an alien concept to young folks.

As NASCAR desperately tries to get a foot in the door with the 18-35 demographic, it will be technology and not racing that ultimately tips the scales. It should be interesting to see how this technology-driven group responds to the fifth season of "Wide Open" coverage from Daytona.