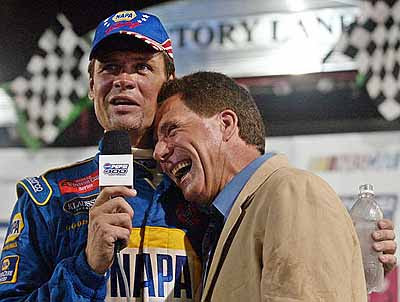 This is an off-week for the Sprint Cup Series, however both the Camping World Trucks and the Nationwide Series are racing in Nashville, TN. Trucks are on Friday night and Nationwide teams race Saturday afternoon as NASCAR stays away from the Easter holiday.

Michael Waltrip is away this weekend, so it will be older brother Darrell teamed with SPEED's regular CWTS crew of Rick Allen and Phil Parsons to call practice, qualifying and the race. Hermie Sadler and Ray Dunlap will handle the reporting duties.

The senior Waltrip is very popular these days. As you may know, SPEED is carrying the upcoming Nationwide Series race from Richmond, VA due to an ESPN scheduling conflict. There had been much speculation about who from the SPEED and FOX stable of announcers would be selected for this one-time special.

SPEED has now confirmed that the line-up will be Allen with both Waltrips. That's right, Michael and Darrell working together on a race without a "crew chief" up in the booth. This is a bit surprising, because Jeff Hammond and Hermie Sadler have been teaming-up on the Nationwide Series practice and qualifying telecasts on SPEED with good results.

Details are still being worked-out on the pre-race show, but covering pit road in Richmond will be Krista Voda, Ray Dunlap and Hermie Sadler. Look for Voda to be tapped to handle the pre-race duties.

Back in Nashville, ESPN is covering the Nationwide race with Marty Reid, Ricky Craven and Brad Daugherty in the TV booth. Since this is a stand-alone race, the pre-race show will be hosted by pit reporter Dave Burns. Shannon Spake and Jamie Little will be the other two pit reporters.

This is an opportunity for Craven to showcase his skills as he continues to emerge as a talented NASCAR TV analyst. Daugherty has been frozen in time since he came on the scene back in 2007. This telecast will put him in the position of doing a lot more than cheerleading from the Infield Pit Studio.

On Thursday, April 28, there will be a live telecast on SPEED of Denny Hamlin's annual short-track shootout charity event at 8PM ET. This year, with Southside Speedway temporarily closed, the Late Model race is going to be held at RIR.

SPEED has passed along that Mike Joy will call the racing that night with Ken Schrader and Kenny Wallace in the TV booth. Handling the interviews will be Bob Dillner and Dick Berggren.

Over at VERSUS, the new Comcast/NBC management team has done as we all expected and announced that network will be rebranded with something containing an NBC in it. The network of IndyCar and the NHL also hosts NASCAR programming consisting of post-produced Whelen Modified races and a late season weekly review program.

You can scroll down to the earlier post for full details, but the announcement that the former head of SpeedVision, Bob Scanlon, has returned with a new HD network backed by Discovery has some folks scrambling. Velocity is going to be 24 hours of male-oriented motorsports, adventure programming and high-end HD car shows. It will take the place of Discovery HD Theater on your cable dial.

The great news from Scanlon is that there is already an original series in development with the NASCAR Media Group. No details yet, but Scanlon is the original man behind the Monday night Inside Sprint Cup Racing franchise. Stay tuned.

Just as Rupert Murdoch used News Corp to buy SPEED and get into the motorsports TV business, there is a report out that he may be eyeing Formula 1. Click here for a story from Mark Kleinman about this latest project continuing the path of Murdoch and his family trying to acquire truly global sports TV properties.

On the ratings front, the Nationwide Series race came in with a 1.8 and the Sprint Cup telecast managed a 4.6, down slightly from last season. Ratings are affected by many factors and reading too much into them just gets the true discussion off the right track. ESPN and FOX have simply been resistant to real change and this is the result.

Mike Massaro is hosting NASCAR Now this week on ESPN2. It's unfortunate that ESPN has eliminated the reporter roundtable shows on the Sprint Cup Series off-weeks. That leaves a big TV hole on the Monday before Richmond. Danielle Trotta is hosting Race Hub on SPEED Wednesday and Thursday as Steve Byrnes is on vacation.

After his strong finish at Talladega, there has been a groundswell of fans who would like Dale Earnhardt Jr. to get on Twitter. Jimmie Johnson has recently come on board and is having a great time with the fans. If you have not done it, take a second to sign-up and download a free Twitter app to your cell phone.

Twitter is an amazing resource for NASCAR information and does not take up any more time than you allow. You can follow us at twitter.com/thedalyplanet for news, opinion and links. If you ever wanted to communicate directly with a driver, team or media personality, Twitter is the place for you.

Please feel free to offer your opinion on the topics mentioned above. To add your comment, just click on the comments button below. This is a family-friendly website, please keep that in mind when posting. Thank you for taking the time to stop by The Daly Planet.