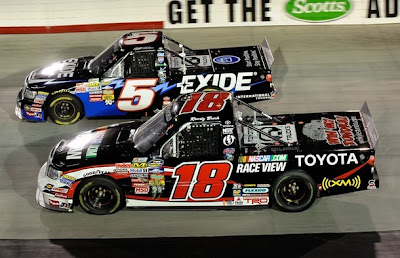 It's taken a little while to sort out the emails, tweets and Facebook messages sent by angry fans over the weekend. They were not about a driver, a team or even a TV commentator. They were all about the various services offered by the NASCAR.com website.

It seems ironic that NASCAR.com does not offer a live leaderboard for the Camping World Truck Series. This past week, NASCAR.com RaceView was the primary sponsor on the winning truck from Kyle Busch Motorsports, pictured above. It was the only positive night for NASCAR.com of the three racing dates at BMS.

Turner Sports Interactive out of Atlanta, GA operates the NASCAR.com website. It paid NASCAR a hefty fee to operate the site and maintain total Internet exclusivity for NASCAR video and audio content.

Trackpass is the gateway to the three pay services NASCAR.com offers. RaceVew, Pit Command and Scanner each offer various applications for a monthly or annual fee. RaceView has all the bells and whistles, including team scanners, real time data and virtual video that allow fans lap-by-lap tracking of teams.

There have been several redesigns of the NASCAR.com website and upgrades of the three pay services. The current homepage resembles many sports blogs with an emphasis on key news stories combined with advertising. Video elements have recently been integrated effectively into the site and include contributions from TNT and SPEED personalities.

The history of fans upset about NASCAR.com goes back years. It's easy to find forums online full of conversations about problems. Recently, the issue has flared again as some current technology is having trouble dealing with the Trackpass applications.

When Apple released the iPad, it did not support Flash technology. That is the basis for the Trackpass applications. While the leaderboards worked, the remainder did not. That put iPad users out of the NASCAR.com mix for this season.

The most recent problems happen when fans try to log on for a Sprint Cup Series race. This was especially prevalent at the Michigan and Bristol race weekends. Amid the bevy of browsers, operating systems and Internet Service Providers, it's understandable that some problems would arise. This situation is perhaps a little different.

A key issue repeated by frustrated fans is summed up quite well in this blog post from NASCAR fan Mark Headrick:

I don’t mind troubleshooting problems. however I do not want to do it during the actual race! It totally ruins the fan’s experience. How can you expect fans to search knowledge bases and forums, reinstall Java, plug-ins, audio and video drivers, and do whatever else might be potentially involved?

It boggles my mind that there isn’t a race simulator that we can test these applications with during the week. If I was a NASCAR website/TrackPass developer I’d scream for this. I am quite sure the NASCAR.com website team has no desire to fix the software during races. Normally I wouldn’t give a flying fruitcake about it, but I am paying more for TrackPass than I am for my webhosting.

Headrick's point is well taken. Fans experiencing problems have to step away from the race to troubleshoot the problem and often find they are in a long helpline at the website. Picking up the phone is even more interesting.

The NASCAR.com phone calls are answered by the International Speedway Corporation operators in Daytona Beach, FL. Needless to say, this is not the Geek Squad. Fans who called recently found sympathy, but little help.

One fan emailed NASCAR.com and got a nice little admission about the Bristol weekend in return. NASCAR.com customer service responded with the following:

"There was an issue for both race series with all of the Trackpass products from those races. It was actually a server issue and the technical team had to reset the servers and this was not done until the end of the Cup race on Saturday."

Well, that's mighty nice but did not actually help the situation as the races were in progress. The problem with that answer is NASCAR.com is a pay service. Ultimately, good customer service and reliable products are the only way to keep fans coming back.

Twitter has been in use by many NASCAR fans for some time now. Saturday night, I was so overwhelmed on Twitter with fans asking me for help I contacted NASCAR directly and asked what was going on. After a short time I was told by NASCAR from the track that all the online troubles were sorted out. It certainly did not look that way.

For hours on Saturday, it was easy to watch the endless tweets from upset fans missing the online part of one of the most exciting night races of the season. Add to that the fact that some key TV markets were showing NFL preseason football instead of NASCAR and the mess just gets bigger. No access to NASCAR.com's online pay service and no live TV. That is a bad combination.

Perhaps you could take a moment to tell us your experience with NASCAR.com, the customer service and the products. It would help to put things in perspective after a Bristol weekend that left some fans rather steamed.

To add your opinion on this topic, just click on the comments button below. This is a family-friendly website, please keep that in mind when posting. Thanks for taking the time to stop by The Daly Planet.
Posted by Daly Planet Editor at 12:05 AM 31 comments: