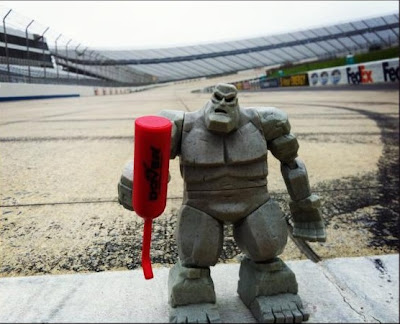 Miles the Monster was out working on track conditions at Dover on Thursday. He was preparing for the first of three days of racing to come. Thanks to the Speedway PR staff for the pic.

It's been years of complaining for fans who followed the Friday Dover truck series race on Twitter, Facebook and the various NASCAR websites. Since the facility has no lights, the race was actually run in the late afternoon and then aired on a tape-delayed basis in the evening on SPEED.

Needless to say, there was a lot of frustration that SPEED just simply did not air the race live at 5PM and then re-air it that night as scheduled. This year, the network and NASCAR decided to do just that.

Social media is sweeping through NASCAR like nothing before. All elements of the sport have been working hard to see just what new opportunities exist for the use of real time technology in getting information out to the fan base. Tracks, drivers, teams and sponsors have been working hard.

One result of all this information is that tape-delayed or time-shifted NASCAR TV programs have been exposed. In the past, SPEED would just list the truck race as airing at 8:30PM and fans would tune in. The hardcore fans would read the websites and get the results in advance.

These days more and more people have smart phones in their pocket that connect in a flash to streams of sports information. It's virtually impossible to hide things like the time-shifted Sprint Cup Series banquet, qualifying shows or K&N races. It's absolutely impossible for the three national touring series.

SPEED made a solid decision and should not suffer in the evening ratings. Working folks like us will tune-in Friday night when we get home regardless of whether the actual race was telecast live or not. Simply opening the TV window for those able to watch live makes all the sense in the world.

Krista Voda hosts the pre-race show. Rick Allen, Michael Waltrip and Phil Parsons will call the race. Ray Dunlap and Hermie Sadler are the pit reporters. Once again keep an eye on the style of the director as he works to show the largest group of trucks racing and continues to use wider camera shots to keep the racing perspective for the fans at home.

This post will serve to host your comments on the truck series race from Dover. To add your opinion about the SPEED team before, during or after the telecast just click the comments button. Thanks for stopping by.
Posted by Daly Planet Editor at 6:00 AM 10 comments: