Your Comments On The All-Star Race From Charlotte 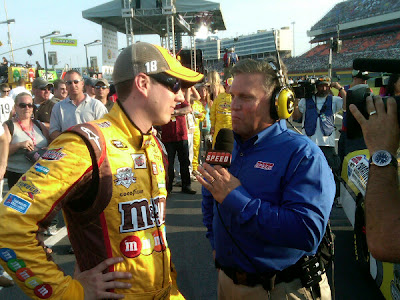 Update: There is no TV Police post as this was not a full-length race. We welcome your comments on the SPEED coverage of the evening of racing on this post. Thank you.

It's a big night for SPEED as the network produces the All-Star race from the Charlotte Motor Speedway. Kyle Busch won the truck series race Friday night and is clearly the story of the evening.

Detractors say SPEED is not the network to expose new fans to the sport. Nothing could be further from the truth. Week in and week out SPEED is the NASCAR network, doing the heavy lifting that the other NASCAR TV partners cannot handle.

Mike Joy is going to call the race. Folks thought that perhaps Rick Allen was going to get a shot after all his hard work on the truck series package on SPEED. This is not a FOX production, but SPEED executives kept Mike Joy in the lead role.

The debate on who is joining Joy in the booth began to rage from the moment SPEED announced it was again going to use Darrell and Micheal Waltrip. Larry McReynolds is filling-in for Kenny Wallace and working on the RaceDay and Victory Lane programs. Wallace is racing in Iowa.

Having two drivers in the booth loses the crew chief perspective, but SPEED likes the feedback it got from the earlier appearance of the two Waltrips on a Nationwide Series telecast. So, it's going to be all Waltrip all night long.

SPEED has a tough task because the All-Star race is always a mess. Rules change, tempers flare and the racing is very different from a longer Sprint Cup Series race. The night consists of two races and it is often the case that the earlier qualifying race is more interesting than the feature.

Look for a hyped-up production with more bells and whistles than normal. In the past, things have been a little over the top but this has been a solid production year for SPEED as the network continues to mature on the air.

Steve Byrnes, Matt Yocum and Dick Berggren are the pit reporters. This trio can deal with anything and brings exactly the type of experience needed for this one-off race. Byrnes is another name that has been discussed in terms of an eventual successor in the FOX TV booth. Krista Voda hosts the pre-race show.

Don't forget that NASCAR.com has a free RaceBuddy for this event. More camera angles and in-car cameras should be a perfect addition for this race.

This post will serve to host your comments on the SPEED production of the All-Star race from the Charlotte Motor Speedway. To add your TV-related comments, just click on the comments button below. This is a family-friendly website, please keep that in mind when posting. Thank you for taking the time to stop by The Daly Planet.