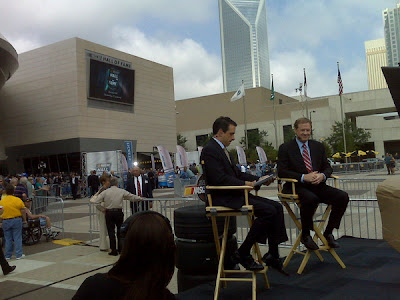 There are few first-time things left in NASCAR. The sport is in a familiar groove that pushes the athletes to repeat rather than innovate. The monkey business and the colorful characters are gone. Now the questions are how many races won, how many championships and how many millions of dollars have been made.

Over the past four seasons, the NASCAR TV contract has left a huge hole in the sport. Gone were the retrospective TV shows that fans remember from the TNN and old ESPN days. The sight of gray-haired men telling tall tales was replaced with flashy video editing, young corporate spokesmen and lots of sponsor hype.

As media technology evolved, it focused us on the future and left the NASCAR past a mess of videotape cases, reels of film and graying still pictures. The legacy of the sport was scattered throughout North America. It lived in boxes in the attic, film canisters in the basement and photo albums covered in dust.

The movement to establish a NASCAR Hall of Fame came long before tough economic times hit the country. It came on a heels of the lucrative TV contract and high hopes for continued growth. Today, it seems like that decision may have served an even higher purpose.

Charlotte, NC was the right place for the building. Cooperating with the downtown development folks was the right thing to do. Companies and major events can now look at the Queen City with a new eye toward conventions, trade shows and technology. The ability to take a business group to the Hall of Fame may seal many a deal.

While a flashy building and a new office tower is nice, the character of the Hall would be defined by the very people who built the sport in the first place. Without the active participation of the NASCAR pioneers, the entire project was doomed to failure.

When the call went out from historian Buz McKim, the NASCAR pioneers answered. Suddenly, things that had been destined to remain private forever emerged to a most public reception. From out of the barns, basements and attics of America emerged the cornerstone of a sport that had become larger than anyone had ever imagined.

McKim and his staff were three years in the process. Vintage pictures, amateur movies and early videotaped interviews were part of the process. Away from the track, a big slice of the NASCAR pie involves radio and television.

It was the original power of live TV pictures that changed the sport forever. From Daytona race coverage on CBS to the first cable TV exposure on ESPN, TNN and TBS there was no doubt that the electronic media was going to be the vehicle that delivered the sport to a broader audience.

Ultimately, radio and television will again play an active role in the sport through activities at the Hall. It will be the interactive exhibits that continue to tell the story of the origins or organized stock car racing. It will be the TV shows, radio broadcasts and specials produced about the Hall that will get the message out.

The picture above is Mike Massaro and Rusty Wallace as ESPN's NASCAR Now show originated from the Hall on Sunday morning. SPEED will be on the air 12PM ET through 4PM with the arrival of the inductees, the induction ceremony and a review of the activities.

We will use this post for your comments on the TV coverage of the Hall of Fame inductions. To add your comment, just click on the comments button below. This is a family-friendly website, please keep that in mind when posting. Thank you for taking the time to stop by The Daly Planet.
Posted by Daly Planet Editor at 11:00 AM 79 comments: