Kyle Busch: On The Spot At The Speedway 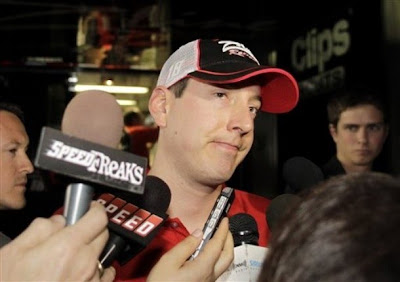 It was a bit funny to pass along the information about Kyle Busch's Tuesday speeding ticket. It was a pretty simple story. A guy out with his wife in a loaner sports car punches it on a rural road and gets caught. Well, at least that was my opinion.

News organizations across the country and around the world thought otherwise. For them, this was a nice little news nugget that could be used to spice up a newscast filled with hurricanes, high gas prices and the local crime scene.

What was the strangest place that you saw, heard or read about "the ticket" this week? It seems the list is endless. Talk about going viral.

Wednesday night on SPEED's RaceHub, Steve Byrnes and Jeff Hammond were talking about one more hurdle that Busch must clear as he tries to clean-up this speeding mess.

"I know he said the right things," remarked Hammond. "But when you use this poor of a judgement out there on the street a lot of people are going to come after you. He is going to have to deal with it first and foremost when he gets to the track on Thursday. It's going to stick with him all weekend long."

What Hammond was pointing out is that Busch had it easy so far this week. In response to the ticket, he issued a well-crafted press release that covered all the bases and was dutifully read on the NASCAR TV shows and posted on the websites. He admitted his error and even thanked the local police department for their service.

Thursday, Busch will have the challenge of navigating the Charlotte Motor Speedway as the track opens for the weekend. The on-track activity will be the easy part. It's the garage, pit road and the media center that will be the challenge. The night actually ends with Sprint Cup Series qualifying live on SPEED.

It should be interesting to see how the SPEED reporters on the various practice and news shows handle this story on the air Thursday. Firmly in step with NASCAR, SPEED has been guilty time and time again of sweeping anything under the rug that NASCAR defines as dirt.

Before the RaceHub show came along, SPEED's TV journalism credibility rested with Dave Despain for one hour on Sunday nights. Now guys like Byrnes, Hammond and Elliott Sadler get put in the position of dealing with touchy subjects on a regular basis as part of the new series.

Mrs. Busch has made herself into a high-profile driver's wife with her social media skills and her relentless promotion of everything involving her new family unit. From bikini pictures on the hood of Kyle's Corvette to a TV series about their wedding, she is a person you either love for her passion or hate for her exploitation.

Thursday will also bring an opportunity for her to step-up and reinforce her husband's apology. Keep an eye on how SPEED treats her or if instead she keeps a low profile and waves-off the interview opportunities.

Throughout the weekend, there is a ton of media content created and moved along to NASCAR fans. Online, radio and TV media members are all seeking to craft their own media messages about the activity while keeping a close eye on each other at the same time.

There is absolutely no doubt that Busch will hear questions from the print/online reporters that he has not heard all week so far. The answers are not going to be crafted by professional public relations professionals, but must come from the driver at the track in among his peers.

As we watch, listen and read about the Thursday activity from the speedway, keep this topic in mind and see how often it appears and what becomes of the story as the day progresses. Sometimes, things change before our eyes in the media world.

This post will host your comments about the Thursday coverage on SPEED from CMS and also about the Busch incident. To add your opinion, just click on the comments button below. This is a family-friendly website, please keep that in mind when posting. Thank you for taking the time to stop by The Daly Planet. 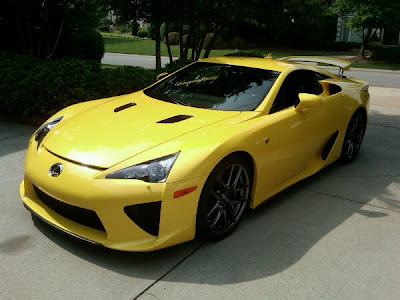 Let's catch up on some of the NASCAR news and notes from the past few days:

Pardon The Interruption (PTI) led with that story and it showed up all over the ESPN network news shows. In a flash it was viral, even getting the sleazy star (click here) treatment from Harvey Levin and the TMZ Hollywood crowd.

In true JGR style, a quick apology came from Busch:

"Today I received a traffic citation in Iredell County. I was test driving a new sports car and I got carried away. I went beyond the speed I should have been going on a public road. I apologize to the public, my fans, sponsors, and race teams for my lack of judgment. I take responsibility for my actions and I can assure you that something like this will never happen again. I thank the Iredell County Sheriff's Department and all law enforcement for the hard work they do every day to protect the public and to enforce the laws in a fair and equitable manner."

It should be interesting to see how far this story spreads in the mainstream media. Both NASCAR Now and Race Hub have proven to be very fair when dealing with issues for drivers away from the racetrack.

Speaking of high-profile celebrities, the Charlotte Motor Speedway passed along the fact that Darius Rucker is going to be singing the National Anthem before the Coke 600 on Sunday. He is a University of South Carolina grad and a Charleston, SC native who is no stranger to pro sports and NASCAR. Great choice by the speedway.

Speaking of speedways, the ESPN gang had a conference call this week about the Indy 500. Sr. VP Jed Drake said the production will have 64 cameras, 12 in-car camera set-ups and the infamous "bat-cam" that is on a wire and runs the length of pit road overhead. There will be two super slo-mo cams aimed at the corners and the team will be pushing more team audio into the telecast. Finally, our favorite motorsports host Brent Musburger will again be joining the telecast team.

Speaking of hosts, Marty Reid will be working in Indy so once again Allen Bestwick gets the nod to call the Nationwide Series race on Saturday. He will have Dale Jarrett and Andy Petree alongside. Let's hope someone gets the bright idea to sneak Hall of Famer and ESPN veteran Ned Jarrett up to the broadcast booth during the telecast for a little air time.

On a sad note, Ray Evernham's father passed away on Sunday at the age of 80. Ray Sr. was a long-time racer and mechanic. The younger Evernham left his post at ESPN to work for Rick Hendrick this season and has kept a very low media profile. There was a rumor that SPEED was trying to get him into the fold but that apparently has not worked out. When Evernham was teamed with Ricky Craven, ESPN had a strong studio team that the network has never been able to match since Evernham's departure.

Folks have been asking about Michelle Bonner, the ESPN on-air talent who has been hosting NASCAR Now. Both Mike Massaro and Nicole Briscoe have been working out in the field on NASCAR telecasts. Briscoe again hosts the NNS pre-race show this weekend and Massaro is a pit reporter.

Bonner came to ESPN in 2005 after a two-year stint as a sports reporter and anchor for CNN. A Massachusetts native, Bonner is a Northeastern University grad and has been working on ESPNNEWS and SportsCenter during her time at ESPN. She has been filling-in for two years on NASCAR Now and is getting great reviews.

Ratings from the weekend were less than spectacular. Here is the official note from SPEED:

Coverage of the NASCAR Sprint All-Star Race on Saturday scored an average household rating of 3.32 according to Nielsen Media Research, up 1% from last year’s 3.30. The race peaked at a 4.08 and averaged 3,993,000 viewers.

On Friday, coverage of the NASCAR Camping World Truck Series race scored a .98, up 42% from last year’s rain-delayed .69 and that is the highest rating from Charlotte since 2008. Race coverage peaked at 1.30 HH rating and averaged more than one million viewers.

What SPEED is a little miffed about and the trio in the booth chose not to pass along is that the more than thirty-minute delay between races was due to the failure of the giant video board set-up for the introductions. The JHE Production Group eventually fixed the problem, but there was little doubt that some portion of the audience moved on during the delay.

Finally, there was a little breaking news on SportsCenter today. Anchor Linda Cohn reported that ESPN's Terry Blount has confirmed that Danica Patrick is making the switch to NASCAR on a full-time basis in 2012. Blount's information said Patrick will run the Nationwide Series for the championship next year and mix in some selected Sprint Cup Series events. In 2013, she would go Cup racing full-time.

Click here to see the video of the Danica story from ESPN's YouTube page. Blount did not have any details about the teams involved but said Patrick would bring her Go Daddy sponsorship with her to NASCAR.

Happy to have your comments on these topics, just click on the comments button below. This is a family-friendly website, please keep that in mind when posting. Thank you for taking the time to stop by The Daly Planet.