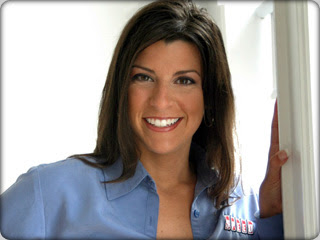 Let's face facts. SPEED's Wendy Venturini is tough as nails. Week after week, she hangs-out in the garage area amid the crowds, the weather, and the entire NASCAR "family." She has become such a staple on RaceDay that most NASCAR fans just know her as "Wendy."

This week, with NASCAR heading to the Chicago area, there are some interesting facts about her local connections. Her great-grandfather came to Chicago from Italy back in 1927. His son Tony opened an Amoco service station and became the first member of her family to be involved in racing as a driver.

Most fans know Wendy's father Bill, and her brother Billy, who have raced for many years in both ARCA and NASCAR. I got a great kick out of learning that when Wendy's dad married her mom Cathy, they began their honeymoon at the Rockford Speedway in Rockford, Illinois. Now, that's a racing family.

My memories of Bill Venturini came from his ARCA racing, but also from the fact that he had an all-female pit crew for many years. As you may have guessed, his wife was the front tire changer. I kid you not. Wendy and her brother traveled to almost every race as kids, and literally grew-up in stock car racing.

On Sunday's edition of RaceDay on SPEED, Wendy interviewed Mario Andretti at his winery in Napa, California. Andretti is one of the toughest men in racing, and has a long history of frosty relations with the media. Several times during the interview, Mario told her that she was asking great questions. That alone got my attention.

It seemed that now, permanently separated from his driving days, Andretti felt comfortable speaking openly and honestly about his career, his regrets, and his life in America. The scenery was great, the interview was first-rate, and the comments from Andretti were memorable. But, there is more to the story.

Mario Andretti and his twin brother Aldo were born in Italy, and fled the country to escape an occupation by outside forces. They re-settled in Nazareth, PA with one hundred and twenty-five dollars to their name. Now, Mario sits in his winery in Napa and reflects on a racing life that includes a Daytona 500 win.

Somehow, it seems only fitting that he does that while being interviewed by a woman whose own family emigrated from Italy, worked hard for their dreams, and now proudly watches as Wendy emerges as one of the most trusted television personalities on the NASCAR scene.

Where Wendy Venturini will wind-up is anyone's guess. Most believe she will eventually graduate to a higher profile role on sports television. So, for this season, its a smart idea for fans and viewers to appreciate her hard work while she is still patrolling the "NASCAR beat" for SPEED. After reading this, maybe more fans will understand where she gets her work ethic, and why she can't stop smiling.

The Daly Planet welcomes comments from readers. Simply click on the COMMENTS button below, or email editor@thedalyplanet.tv if you wish not to be published. All email is confidential. Thanks again for stopping by.
Posted by Daly Planet Editor at 9:15 PM 8 comments:

Ryan Burr has "NASCAR Now" On A Roll

As the NASCAR season nears its high point for news and information, ESPN has just used Tuesday and Wednesday of this week to unveil very new back-to-back episodes of NASCAR Now. Hosted on Tuesday by Allen Bestwick, and on Wednesday by Ryan Burr, the new look of this show has hard news, topical interviews, and edited features at the core. These changes may have come just in the nick of time.

At the start of the show, Burr followed-up immediately on the on-going saga of Budweiser and Dale Earnhardt Junior. ESPN2's NASCAR "Insiders" Marty Smith and Terry Blount were featured in the first segment dealing with several "hard news" issues. Once again, the two reporters were allowed to interact with each other and the host, which made this "news report" exactly what the fans wanted.

With very active websites out there like Jayski.com, ESPN has to work hard these days to justify why NASCAR fans would turn-on the TV rather than surf the web for the latest information. Rolling out the best NASCAR reporters right at the top of the show with the most up to date information is key to this program gaining ground over the next four months of the season. Today's news segment was another success.

Burr was kind to Brad Daugherty in the two on-camera pieces Daugherty contributed in the show. Thankfully, ESPN has slowly started to go away from the "pick' em" and "fact of fiction" type of features that make fans nuts and take-up valuable time. Daugherty picking an All-Star from each NASCAR team because of the MLB All-Star Game was harmless. His picks were quite curious, but you have to give him credit. He hangs in there.

A good young second generation driver Brad Keselowski was just picked to run Earnhardt Junior's Busch Car for the next three races. Since NASCAR Now has struggled to promote ESPN2's own Busch Series coverage this season, an interview with Keselowski was a great touch. Unfortunately, it seemed that Ryan Burr did not know Brad's family history in the sport, but the interview was professional and caring. ESPN is a multi-year exclusive Busch Series broadcast partner. They need to promote and pump-up interest in this struggling series.

One of the strengths of both ESPN and NASCAR Images is their ability to produce fabulous edited features. Often, these features gain additional power from being presented without a "voice over" from an announcer. At the halfway point in the season, NASCAR Now presented a super feature that really brought back a lot of memories from Daytona in February, and followed right through to the same track this past weekend. A fantastic "post-produced" feature of this type would be right at home on a weekly basis in the Wednesday mid-week show.

NASCAR Now has stepped-up to the plate and pulled its act together with only two weekends before ESPN takes over the NEXTEL Cup coverage for the rest of the season. Hopefully, this ABC/ESPN exclusivity will allow additional on-camera pieces and feature elements to be taped at the track and presented throughout the week. That should really round-out the positive changes this program has made over the last two days.

For veteran ESPN viewers, these last two shows might have brought back a hint or two of...dare I say it? On both days, I had the same positive vibe about racing that I did when John Kernan finished a fast-paced episode of RPM2Nite. Let's hope ESPN rides this big wave all the way to November.

The Daly Planet welcomes comments from viewers. Simply click on the COMMENTS button below, or email editor@thedalyplanet.tv if you wish not to be published. All email is confidential. Thanks again for stopping by.
Posted by Daly Planet Editor at 8:29 PM 8 comments: