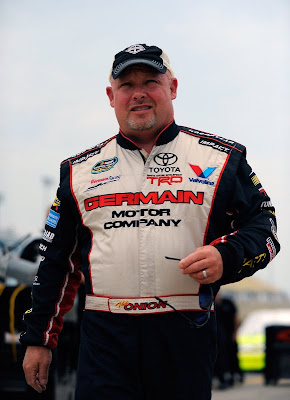 While the Sprint Cup and Nationwide Series are in New Hampshire, the Camping World trucks are sharing a Saturday bill with the ARCA Series at Iowa Speedway.

Krista Voda will kick off the coverage with the pre-race show at 7:30PM. This field is very slim, with no Cup drivers and only a handful of top teams. It should be interesting to see what stories are selected for the pre-race telecast.

Rick Allen, Phil Parsons and Michael Waltrip will call the race. Hermie Sadler and Ray Dunlap will report from pit road. This is a veteran TV team that should know exactly how to make the best of what they get from the field.

The key for SPEED is not to try and gloss over the reality of the race. These teams get an opportunity to race on Saturday night on national TV in primetime. If a group of them decide to start and park, then SPEED needs to document it. Should some teams normally in the back have a good race, then that needs to be relayed as well.

After a hectic week, series champ Todd Bodine did make it to Iowa driving for a newly-merged and semi-confusing team that features Randy Moss Motorsports and Germain Racing. Todd might be a man with something to prove.

You just never know with the trucks, it could be an outstanding show under the lights or a single-file race of attrition. Let's hope the top guys mix it up even with the thin field and make it good for TV.

This post will serve to host your comments on the SPEED coverage of the Camping World Truck Series race from Iowa Speedway. To add your TV-related opinion, just click on the comments button below. Thanks for stopping by. 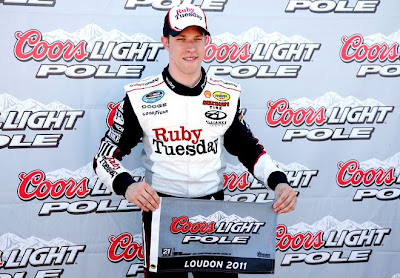 The weather is beautiful at New Hampshire Motor Speedway. SPEED has handled all the TV activity this weekend as ESPN has been busy with other non-motorsports programming.

The network steps away from golf and into NASCAR with coverage of the Nationwide Series beginning at 2:30PM ET. Allen Bestwick hosts the pre-race show with Rusty Wallace and Brad Daugherty. It's a shame ESPN did not let Bestwick call this race, since Bestwick is a New Englander and would be a great presence for the network in New Hampshire.

Instead, it will be Marty Reid working with Wallace and Ricky Craven in the booth. Dale Jarrett is off this weekend and Andy Petree brought a Modified car to the track and was going to race until he crashed in practice.

Dr. Jerry Punch, Vince Welch and Dave Burns will handle pit road. New Hampshire Motor Speedway can feature long green flag runs if the field gets stretched out or lots of cautions if things bottle up and the spinning begins on this flat track.

This is a layout where the TV director has to hustle. Flat-track racing means lots of camera cutting and quick incidents. Forcing in-car cameras into this broadcast can mean the loss of perspective for viewers and the potential to miss key incidents.

There are lots of Sprint Cup Series cross-over drivers today led by Brad Keselowski, who is on the pole. That means some drivers will flat-out be racing for the win, while the "regulars" will have to keep the season championship in mind.

This is the final dress rehearsal for ESPN. After this weekend, the network hosts both the Nationwide and Sprint Cup Series coverage until the end of the season. Marty Reid wanted the pressure and he has it. He will handle the top two NASCAR touring series telecast for the rest of the season.

This post will serve to host your comments about the ESPN coverage of the Nationwide Series race from the New Hampshire Motor Speedway. To add your TV-related opinion, just click on the comments button below. Thanks for stopping by.