Sunday should bring an interesting mix of NASCAR TV programming to fans long before the first engines are fired. During the TNT stretch of the Sprint Cup season, there are actually four-and-a-half hours of live pre-race shows on three networks.

NASCAR Now on ESPN kicks-off the festivities from the ESPN studios in Connecticut at 10AM Eastern Time. Either Ryan Burr or Nicole Manske hosts this program, which uses reporters and the ESPN race announcers at the track to provide news and commentary.

ESPN has been very straightforward in speaking about the discrimination lawsuit currently in the NASCAR news. On both Friday's NASCAR Now and on the NASCAR Countdown pre-race show Saturday night the current facts about the topic were presented and various personalities offered concise comments. The information was also presented on SportsCenter and ESPNEWS.

This article by ESPN's David Newton really fans the flames and perhaps Kyle Petty might like to re-think some of his comments. It is especially ironic that Petty is quoted, after he recently finished the thirty minute Tradin' Paint program on SPEED without ever mentioning a word about the lawsuit issue. The topic was never raised. Newton should be on NASCAR Now Sunday.

Next-up for fans will be RaceDay on SPEED at 10:30AM. This network has avoided the lawsuit topic like the plague this weekend, but often Jimmy Spencer and Kenny Wallace are rather outspoken on controversial topics. Normally, Wendy Venturini handles the news stories, but the lawsuit is strictly about the Nationwide Series which is carried on ESPN.

It should be interesting to see just how SPEED and the NASCAR Media Group which produces the program choose to address this issue. RaceDay is loaded with guests including Jeff Burton, Mark Martin, David Ragan, Kasey Khane and Brian Vickers.

Features in the show include a Harry Gant update, a Petty Enterprises follow-up and a look at fathers and sons involved in NASCAR. Venturini's Real Deal is an interview with Clint Bowyer and his father Chris. John Roberts will host the program as usual with contributions from Hermie Sadler and Rutledge Wood.

RaceDay was moved to not conflict with the next programming block. NASCAR on TNT Live! begins at 12:30PM and runs for one hour. This is the feature-oriented program hosted by TNT's Marc Fein. Kyle Petty and Larry McReynolds will join Fein on the set and Carl Edwards will stop by for an interview.

The Pride of NASCAR feature will focus on Ernie Irvan, who almost lost his life in a non-racing crash at MIS. Reporter Ralph Shaheen will get a behind-the-scenes look at Jack Roush's personal garage and the vehicles inside. Wally Dallenbach and Petty will use two COT cars again to show viewers the dynamics of racing at MIS on Wally's World.

Second year TNT reporter Lindsay Czarniak will have a very interesting feature in this show. She is looking this season for off-beat stories that might not normally make it into a race broadcast. Sunday she will be talking with Dale Earnhardt Jr. and Washington Redskins player Chris Cooley. These two professional athletes are friends away from the racetrack and the football field.

The final pre-race show is Countdown to Green at 1:30PM for thirty minutes. TNT's Bill Weber hosts this program along with Dallenbach while Petty makes his way up to the booth. Marty Snider and Matt Yocum will be reporting from pit road. The show focuses on the race stories, but this Sunday will also feature Joe Gibbs and focus on his grandson's battle with Leukemia.

Yes, TNT's own Bill Engvall will be on-hand as Grand Marshall and will no doubt make his way into one or both of these programs before giving the command to start engines. That should be a memorable way to finish off four-and-a-half hours of NASCAR TV before the first engine has even started.

This post will serve to host your comments about all three pre-race shows. To add your opinion, just click on the COMMENTS button below and follow the easy instructions. The rules for posting are located on the right side of the main page. Thanks for taking the time to stop by.
Posted by Daly Planet Editor at 9:49 PM 31 comments:

This will be the first Nationwide Series race since the story of the discrimination lawsuit hit the news. ESPN has a full crew on-hand, with Dr. Jerry Punch and Dale Jarrett having the weekend off.

It will be Allen Bestwick hosting NASCAR Countdown at 8PM. This thirty minute pre-race show will originate from the Infield Pit Studio and Bestwick will be joined by Rusty Wallace and Brad Daugherty. As mentioned in earlier posts, Daugherty is the co-founder of NASCAR's Diversity Council and should be able to speak to the lawsuit issue.

With Punch on vacation, it will be TV veteran Marty Reid calling the action from the booth. Joining Reid will be Wallace and Andy Petree. Those three will be joined by pit road reporters Vince Welch, Mike Massaro, Shannon Spake and Jamie Little.

The news from Kentucky is that the race is a sell-out, but the track has been struggling with "weepers" all day long and that moisture may be a problem for the race. NASCAR has been actively involved in trying to fix the situation.

This post will serve to host your TV-related comments about the Nationwide Series race on ESPN2. To add your opinion, just click on the COMMENTS button below and follow the easy instructions. The rules for posting are on the right side of the main page. Thank you for taking the time to stop by.
Posted by Daly Planet Editor at 6:57 PM 107 comments:

All Eyes On Allen Bestwick Tonight From Kentucky 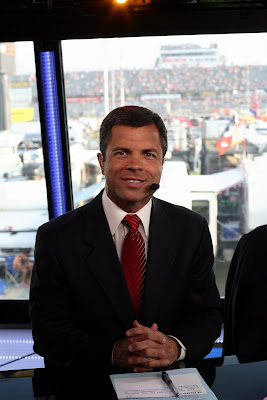 This certainly has been a fascinating NASCAR season for ESPN. After changing the on-air line-up of both the network's studio and at-track announcers, ESPN has been on a huge roll since February.

As most fans know, ESPN covers the entire Nationwide Series. ESPN is, as some folks say, the "TV network of record" for that series. Originally struggling for some good racing and fresh-faces, the Nationwide Series had begun to take-on a personality this year.

Joey Logano has arrived and Brad Keselowski faced-off with a Cup driver. Hard-working guys like Mike Wallace and Marcos Ambrose began appearing on NASCAR Now and putting the series back into the public eye.

Saturday night from Kentucky, all eyes will be on the series for a very different reason. The allegations made in a recent discrimination lawsuit do not talk about the Sprint Cup Series. They do not point to the Craftsman Trucks. What the very powerful words do is simply take direct aim at the very NASCAR officials running the Nationwide Series and call them racist and sexist.

Suddenly, into the middle of this storm steps Allen Bestwick. He will be hosting the thirty minute NASCAR Countdown show on Saturday night at 8PM Eastern. Bestwick is the new face of ESPN's NASCAR coverage and has been the most high-profile announcer all season long.

The story of Saturday night will be the lawsuit. Seated alongside of Bestwick will be Brad Daugherty and Rusty Wallace. While Wallace is a team owner in the Nationwide Series, it will be the words of Daugherty in prime-time on ESPN2 that will be heard with great clarity.

Daugherty created the NASCAR Diversity Council with Brian France to help promote greater opportunities for people of color and women in the sport. Now, several years later, a professional college-educated black female has slapped the very sport Daugherty encouraged her to participate in with a huge and very personal lawsuit.

While Daugherty had only several minutes on Friday's NASCAR Now to comment, he will have thirty minutes of pre-race and then the entire race on Saturday night. As most of the American public knows, how sanctioning bodies and TV networks handle this kind of awkward and sensitive issue is going to be very important.

NASCAR has a business to run in a very tough economic climate and ESPN has a series to cover that has been dismal in the ratings for years. Cup drivers beating-up on Nationwide regulars has been the story of this entire division. Now, just when things were starting to change, an off-track issue threatens to dominate the coverage.

SPEED chose to avoid this issue like the plague so far this weekend and shows like NASCAR Live, Trackside and Tradin' Paint did not even acknowledge that the lawsuit had been filed or that the NASCAR media was full of stories about the issue.

It might be Allen Bestwick's best moment of the season, or it might be another well-coached public relations exercise. ESPN can decide to come down on the side of NASCAR as a television rights-holder, or step-up as a sports TV network that professes to be the leader in worldwide coverage.

NASCAR Countdown will begin at 8PM live nationwide on ESPN2.

The Daly Planet welcomes comments from readers. Simply click on the COMMENTS button below and follow the easy instructions. The rules for posting are on the right side of the main page. Thanks for stopping by.
Posted by Daly Planet Editor at 11:55 AM 34 comments:

Racing will return to MIS on Saturday afternoon as the Craftsman Truck Series takes to the big superspeedway.

Krista Voda will kick things off with The Set-Up pre-race show at 2:30PM for thirty minutes. Both pit reporters, Ray Dunlap and Adam Alexander, will join her.

It will be Michael Waltrip returning to the announce booth at MIS to provide analysis of the event alongside Phil Parsons. Veteran play-by-play announcer Rick Allen will call the action.

The Truck races on SPEED usually generate very few comments because the production has been solid now for several seasons. This is a SPEED crew and the results of their dedication can be seen easily by viewers. This series has a feel all to itself, and the racing coverage is simple and effective.

Michael Waltrip is returning to a team of announcers who have worked without him recently, and did an outstanding job. Waltrip's presence changes the on-air dynamic of the race because of his enthusiasm and personality. While some viewers prefer the laid-back style of Phil Parsons, others feel just as strongly that Waltrip's excitement adds a nice touch to the team.

This post will serve to host your comments about the Craftsman Truck coverage on SPEED. To add your TV-related opinion, just click on the COMMENTS button below and follow the easy instructions. The rules for posting are located on the right side of the main page. Thanks again for taking the time to stop by.
Posted by Daly Planet Editor at 11:50 AM 34 comments: 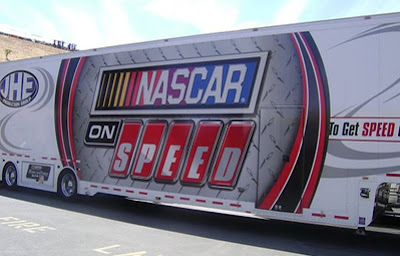 SPEED starts the NASCAR TV Saturday with coverage of the Sprint Cup practices in Michigan. The first practice will be the SPEED announcers, and the "Happy Hour" coverage will be the TNT gang.

Steve Byrnes will host the first session with Larry McReynolds and Jeff Hammond alongside. They will be assisted by Matt Yocum and Marty Snider reporting from the garage area. The first practice session will begin at Noon Eastern Time.

The TNT trio of Bill Weber, Wally Dallenbach and Kyle Petty will call the final practice. This time in the garage it will be Lindsay Czarniak and Ralph Shaheen.

This coverage will lead into the NCTS pre-race show at 2:30PM and the race at 3PM. There will be a new post up for comments on SPEED's coverage of that event at 1:30PM. Please feel free to add comments about the two practice sessions on this post.

To add your opinion, just click on the COMMENTS button below and follow the easy instructions. The rules for posting are located on the right side of the main page. Thank you for taking the time to stop by.
Posted by Daly Planet Editor at 11:34 AM 5 comments: