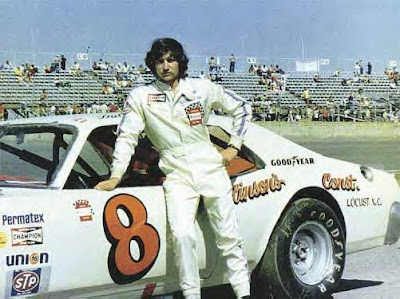 It would be easy for ESPN to skip over the memory of Dale Earnhardt Sr.'s passing. Almost a decade has gone by and life has moved on as it always does. Stories within the sport from the Daytona 500 aftermath to the continuing sponsor struggles are driving the NASCAR news at this time. Luckily, the production team at NASCAR Now made a great decision. They chose to honor the past.

It was Mike Massaro in his new role as co-host of this series that kicked-off a classy tribute to Earnhardt in the Wednesday program. ESPN was no doubt aided by The NASCAR Media Group as vintage footage of Earnhardt flashed across the screen documenting his long and illustrious career.

Massaro then brought in ESPN's Ed Hinton to talk a little bit about his experiences with Dale Earnhardt, the person. Hinton is still getting the hang of TV, but his candid words and straightforward approach to subjects like this are always worth listening to on NASCAR Now.

Veteran fans may remember that Hinton was in the middle of the legal battle to access the images of Earnhardt after his passing. The issue was why and how the driver, a personal friend of Hinton, had been fatally injured. Click here for Hinton's Wiki page, which talks about that topic.

Massaro is making the most of his new position and putting his personal stamp on this program. Along with Nicole Manske and Allen Bestwick, Massaro and NASCAR Now may wind-up having the best season ever for this series.

The only fly in the ointment is one that has been with the program since it began in 2007. NASCAR Now refuses to promote NASCAR races not on the ESPN networks during the promo page inserted in each show.

This week, NASCAR Now has consistently skipped over the Camping World Truck and the Sprint Cup Series races from California to instead promote NHRA Drag racing action. With NASCAR needing every fan possible to either watch or attend the races, perhaps the production team will re-think this item.

On the whole, NASCAR Now has taken up right where it left off last season with a strong line-up that now includes Ricky Craven on a semi-regular basis. Craven will be on the Thursday show along with Lead Reporter Marty Smith to preview the racing in California.

If you have a comment about NASCAR Now, please click the comments button below to leave your opinion. This is a family-friendly site, comments with profanity or hateful speech will be deleted. Thanks again and happy posting.

Here are some additional Internet stories remembering Dale Earnhardt Sr. (just click on the title to open):
A tribute by Jen from The Bleacher Report.
Lee Spencer's original article from the 2001 Daytona 500 for The Sporting News.
Inspirational article by Jim Kidd for the Bump-Drafts.com site from last year.
Jenna Fryer's 2001 interview with Ken Schrader about the accident aftermath.
A chilling interview with Brian Williams on the NBC News in 2000.
Posted by Daly Planet Editor at 7:00 PM 9 comments:

It certainly was a memorable moment for the NASCAR on Fox team. There was a caution period during the Daytona 500 and play-by-play announcer Mike Joy began to read what sounded like a script.

Suddenly, without warning to families, the NASCAR on Fox crew introduced a three-minute preview of the movie “Watchman.” The clip contained brutal violence, adult language and graphic action from an R-rated movie.

While this might have seemed like a good idea to the LA-based Fox TV executives, it was ultimately tasteless and ill-advised during a live NASCAR event. Especially, during the flagship race of the entire Fox TV package, the Daytona 500.

Click here for the Internet Movie Database parent's guide for the "Watchman" movie. This page provides an overview of the content of the movie and the reasons it was given an R-rating.

Click here to see almost exactly the same preview shown during the live NASCAR race. This was not a commercial, but a three minute added sales element inserted into what normally would be NASCAR-related content. Updates from pit road, race recaps and analysis were put on hold.

As we all know, times are tough and added revenue certainly has been a goal for the NASCAR TV partners as the adverstising market continues to shrink. This decision, however, might not have been a good one in retrospect. The time of day, the content of the live TV program and the rating of the movie being promoted just did not mesh.

Email to TDP was thematic in that this type of advertising might have a place later in the evening on TV, but not in the very same program where Fox knows youngsters and families are watching.

The irony of Fox using the animated "Digger" character to sell t-shirts to children and then offering an R-rated movie preview in the very same live NASCAR race was perhaps not lost on many viewers.

What was your opinion of the "Watchman" promotional video shown in the live race?

To add your comment, just click on the comments button below. This is a family-friendly site, profanity and hateful speech will result in comments not being published. Please address the topic being discussed and forward any other questions or comments to editor@thedalyplanet.tv anytime.

Thanks again and happy posting.
Posted by Daly Planet Editor at 6:30 PM 19 comments: