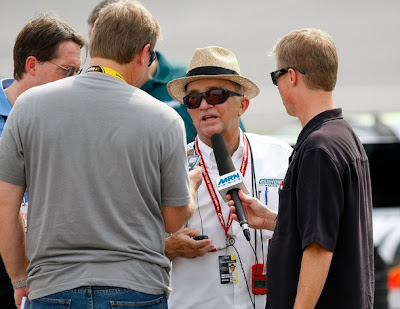 The weather has cleared after overnight rain and things look good for the Sprint Cup Series as they race in Michigan. ESPN has the race coverage after a one hour pre-race show.

Allen Bestwick hosts from the Infield Pit Studio with Rusty Wallace and Brad Daugherty alongside. Marty Reid calls the race with Dale Jarrett and Andy Petree from the TV booth. Tim Brewer is in the Tech Garage. Dr. Jerry Punch, Vince Welch, Dave Burns and Mike Massaro are the pit road reporters. Jamie Little has the weekend off.

MIS is often a fuel mileage race with long green flag runs. The challenge for the TV team is to stay on top of the developing race strategies and update the teams that are struggling. The pit reporters are key at this race.

Saturday, ESPN came into the Nationwide Series race at MIS fresh off a fantastic performance at Watkins Glen. The MIS Nationwide coverage quickly dissolved into tight shots of one or two cars mixed with in-car cameras. The director jumped from car to car and quickly disoriented the TV viewers.

This was the ESPN of old, working stories scripted in the pre-race show like Danica Patrick and the Edwards vs. Keselowski rivalry. The actual reality of what was happening on the track in the field was lost. Only the ticker updated the real stories of the race and offered any perspective on the race itself.

As hard as Reid and Bestwick tried to update viewers, the choice of the pictures by the producer and director pushed the Nationwide race right back into the same old mode. Random images of the leader were mixed with sudden cuts to two cars on the track running next to each other with no explanation. In a word, it was awful.

This is the fourth season of NASCAR on ESPN. Like many of the Sprint Cup Series teams, there have been glimpses of what could be mixed with the reality of the end result. If ESPN tries to offer NASCAR fans this type of disjointed coverage during the longer Sprint Cup Series race, it is going to fail miserably.

With the NFL regular season only weeks away, it is going to be more important than ever before for ESPN to open up the coverage and show fans at home the best racing on the track regardless of position. The trend of following the leader and then jumping back to other cars on the track has been a failure since 2007.

There is an all-star cast of announcers ready for this race and the camera people and other technicians are second to none. Ultimately, the success of this race comes down to the choices made in the production truck by the producer and director. After producing races again this season since February, ESPN should know how to get it right.

This post will serve to host your TV-related comments on the ESPN coverage of the Sprint Cup Series from MIS. To add your opinion, just click on the comments button below. This is a family-friendly website, please keep that in mind when posting. Thanks for taking the time to stop by The Daly Planet.
Posted by Daly Planet Editor at 11:00 AM 251 comments: