Despain Wanders Through The NASCAR Landscape 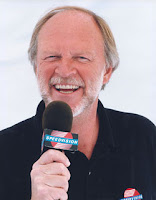 Scheduled as guests on the show were Dale and Ned Jarrett from Hickory, NC. Also on the program was Jimmie Johnson, who actually stopped by the SPEED Studios for his interview. Finally, Mark Martin joined the show for several questions by phone.

Although Despain has a long and distinguished history with NASCAR, his current relationship with the sport is prickly at best. He seems to continually be on the verge of exasperation where every NASCAR topic is concerned.

After several years of hosting Inside NEXTEL Cup with mixed results, Despain normally tolerates NASCAR on his Sunday night Wind Tunnel. What he loves is anything else. Formula 1, motorcycles, Sports Cars and the misery of open-wheel racing puts Despain in his glory.

This hour was clearly intended to be a build-up for the All-Star race, but started off with Despain asking both of the Jarretts a series of off-the-wall questions. As usual, both Ned and Dale provided the best answers that they could, but Despain's negativity about everything NASCAR was the theme of this interview.

Dale provided some great content for the show as he talked about the new chemistry with his ESPN broadcast team. It was very clear that the final seventeen Sprint Cup races of this season will be very different with Jarrett in the ESPN/ABC booth.

Dale's strongest statements came about the COT. For a network TV analyst to say that things need to be changed and changed soon to get better racing is amazing. To have Despain decline to follow-up on that point is even more amazing. Viewers have come to expect Despain to drive his "TV ship" in a very different direction.

Jimmie Johnson got a nice welcome from Despain, as Johnson is a veteran motorcycle and off-road competitor. To Despain, Johnson is not one of those "NASCAR guys." Johnson has been working very hard on his TV skills, and handled everything Despain could offer.

The best part of the Johnson interview was how he transitioned into NASCAR rather than IndyCar. The explanation of the Chevrolet connection and how that brand helped to keep Johnson in NASCAR during some rough times was fascinating. If that has been told in such plain language in the past, I certainly did not see the program.

Johnson was going to take viewer calls, which is a rarity these days for NASCAR drivers on TV. While many drivers are regularly on the radio, TV still has no interactive audience shows except for Wind Tunnel. Unfortunately, in this show Despain delivered exactly one call for Johnson from the fans.

Mark Martin wrapped-up the program with several off-base questions from Despain that wasted valuable time. Martin was forced to talk about old Dale Earnhardt Jr. fan tattoos and comparisons to other drivers. On my cable TV system, the show actually ended with Despain still talking. Somehow, that made a lot of sense.

A while back, Despain did a special program for SPEED on the history of the Daytona International Speedway. It was one of the best programs ever seen on SPEED in the history of the network. His in-depth discussions of things like AMA Pro Series politics and the demise of the Champ Car Series have been fascinating.

Perhaps, with TV professionals on the SPEED staff like Krista Voda and Wendy Venturini who spend almost all their time involved with NASCAR, a program like this would have been better-served allowing someone more informed about the specifics of the sport to interview the guests.

The Daly Planet welcomes comments from readers. Simply click on the COMMENTS button below and follow the directions. The rules for posting are on the right side of the main page. Thank you for taking the time to stop by.
Posted by Daly Planet Editor at 9:32 PM 22 comments:

Live Open Forum: Ask Your NASCAR TV Question And Get An Answer

The forum is now closed, but please feel free to read the Q&A in the comments section. Thank you to all who participated, we will do it again next Tuesday.

Due to popular demand, we are going to bring back the mid-week live question and answer forum.

Just ask your NASCAR TV question in the comments section, and we will try to get you the answer as quickly as possible. We have some friends helping out today, and should be able to respond pretty quickly.

We will keep this thread going all day long, so just check back to see if we got your question answered. TDP has not done this is a while, so with the regular season taking a break for the All-Star race, it seemed like a good time to open the floor for questions.

To ask your NASCAR TV-related question, just click on the COMMENTS button below and follow the directions. The rules for posting are on the right side of the main page. Thanks for taking the time to stop by today and participate.
Posted by Daly Planet Editor at 2:03 PM 41 comments: