NASCAR Preempted By Nothing 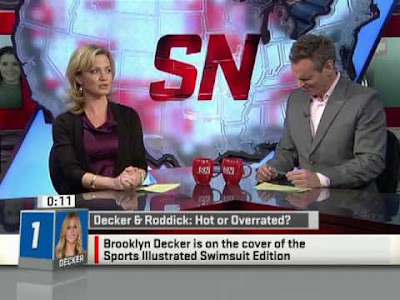 It's been a tough couple of weeks for ESPN2's daily NASCAR Now show. Weekday episodes have been preempted or moved by tennis and Little League Baseball. This Monday, the situation takes a turn for the worse. The show has been preempted by nothing.

It was season four of Seinfeld when Jerry and George had a discussion at the coffee shop about bringing a new TV show idea to NBC. Here is a slice of the conversation.

Jerry: So you're saying, I go in to NBC, and tell them I got this idea for a show about nothing.
George: Yeah, I think we really got something here.
Jerry: What do we got?
George: An idea.
Jerry: What idea?
George: An idea for the show.
Jerry: I still don't know what the idea is!
George: It's about nothing!
Jerry: Right.
George: Everybody's doing something. We'll do nothing!
Jerry: So, we go into NBC, we tell them we've got an idea for a show about nothing.
George: Exactly.
Jerry: They say, "What's your show about?" I say, "Nothing."
George: There you go.
Jerry (After a moment of pause): I think you may have something there.

This Monday after English Premier League Soccer ends and before Little League Baseball begins there is a full hour from 5 to 6PM available on ESPN2. This is the normal time for the one-hour edition of NASCAR Now to air.

The series has been on ESPN2 six days a week since 2007 as the only regularly scheduled support programming for NASCAR. Due to the hard work of those behind the scenes and the tireless efforts of host Allen Bestwick, the Monday version of NASCAR Now has become the finest discussion of the weekend events in the sport currently on the air.

Last week, there were four races at the Bristol Motor Speedway. Kyle Busch won the three races in which he was entered. Storylines are swirling as NASCAR is in the heart of the season and The Chase is looming. In 2006, ESPN paid hundreds of millions of dollars for the rights to show the final seventeen races of the season.

Early on Monday the trio of Rusty Wallace, Ricky Craven and Ray Evernham will be arriving at ESPN. They are this week's expert panel, a term coined by Bestwick a long time ago as he hosted another iconic TV series.

There is no way to overstate the importance of getting the Monday hour of NASCAR Now out to the fans this week. The Kyle Busch topic is sizzling. The Bristol racing across the sport's top three series was outstanding. The Hendrick Motorsports saga is unfolding. In short, what's happening in NASCAR right now is everything.

It's unfortunate that on this Monday, ESPN's programming priority is nothing. The network's version of Seinfeld is called SportsNation. It's a series created by ESPN for ESPN and is generally about ESPN. If features ESPN personalities, is produced in the ESPN studios and is absolutely the epitome of a full hour of nothing.

Co-hosts Colin Cowherd and Michelle Beadle spend sixty vapid minutes aiming trendy comments at their teenage audience, showing funny videos and reading tweets. ESPN wraps the wholesome sex appeal of Beadle and the "can't get a date" loser charm of Cowherd into a show that accomplishes nothing, discusses nothing and leaves no lasting memory. In the new world of ESPN, it's perfect.

So, it is ESPN's choice this week to preempt the 5PM Monday original airing of NASCAR Now and instead move SportsNation into this timeslot. NASCAR fans across the country arriving home ready to view the show they recorded at 5PM are in for a surprise.

Instead of Rusty, Ricky and Ray talking about NASCAR, the wild and wacky world of SportsNation will be in full effect. NASCAR Now will air once at 1AM Eastern, 10PM Pacific time. This choice by ESPN is a very clear indication of where priorities lay at the network.

We welcome your comments on this topic. To add your opinion, just click on the comments button below. This is a family-friendly website, please keep that in mind when posting. Thanks for taking the time to stop by The Daly Planet.
Posted by Daly Planet Editor at 1:30 AM 40 comments: