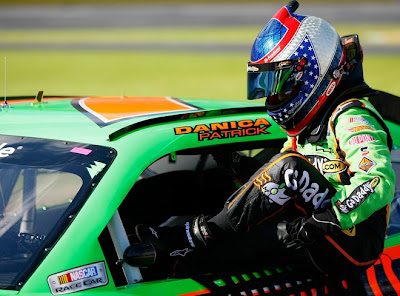 All eyes are on the ESPN TV team this weekend in Charlotte. Two key production personalities are no longer working on the NASCAR telecasts. The Sr. Coordinating Producer has moved into the chair and will be line producing tonight's race.

After the problems with college football, the Nationwide Series finally gets some primetime TV on ESPN2 with no scheduling issues. The TV pictures in Charlotte under the lights are wonderful and the field is fast with lots of diverse personalities and agendas represented.

Allen Bestwick has a full house tonight with Ray Evernham, Brad Daugherty and Rusty Wallace. Evernham is always a welcome presence and certainly deserves a bigger role in ESPN's future coverage. Daugherty and Wallace have been working on their act for several seasons. TV viewers know the drill.

Marty Reid is on his first full NASCAR tour of duty for ESPN and he has been having a tough time since the Sprint Cup Series coverage began. ESPN has Reid double-up on both Sprint Cup and Nationwide Series races. He also handles practice and qualifying. Even with some relief provided by Allen Bestwick, it's been a struggle.

All the regulars are on pit road. Dr. Jerry Punch, Jamie Little, Vince Welch and Dave Burns are covering both races this weekend. ESPN puts the emphasis on the stars of the Cup Series that cross-over to race in on the Nationwide side. That often leaves some key stories of the race untold.

Tonight in Charlotte the racing is going to be fast and furious. The ESPN approach of zooming into one or two cars racing is simply not going to work. Reid is often caught watching the TV monitors, especially when something happens on the track out of camera range.

This is going to be a great opportunity to see if ESPN is going to change their style of coverage after the change in production personnel and the struggling ratings. CMS is a great track for TV to step back, show the racing and let the drivers worry about putting on a show.

Commercials are tough at Charlotte, especially under green flag racing. Pit stops are key, so it's going to be a challenge to get the commercial breaks in without missing some key racing moments.

This post will serve to host your TV-related comments on ESPN2's coverage of the Nationwide Series race from CMS. To add your opinion, just click on the comments button below. This is a family-friendly website, please keep that in mind when posting. Thanks for taking the time to stop by The Daly Planet.
Posted by Daly Planet Editor at 7:00 PM 178 comments: 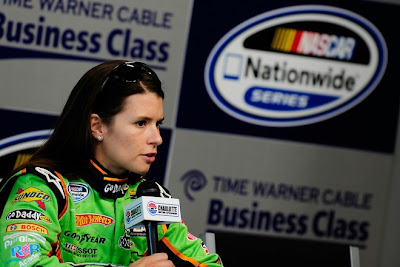 We haven't seen too many Fridays this season when ESPN2 was flying solo on the NASCAR TV coverage and SPEED was dark. Take a quick peek at the Friday schedule on the left side of this page and you will see that is exactly what is coming up from the Charlotte Motor Speedway.

There are going to be two TV teams working. Marty Reid will be up in the TV booth with his partners Dale Jarrett and Andy Petree. Down in the Infield Studio will be Allen Bestwick, Ray Evernham, Rusty Wallace and Brad Daugherty.

Since the ESPN2 coverage is so extensive, the two teams will take turns handling parts of the coverage. This has been done before, where the Infield guys basically look out the window and use the ESPN video for their real view of the track.

Dr. Jerry Punch is fresh off his Hall of Fame voting and leads the pack of four pit reporters on the day. Jamie Little has come a long way from her "how do you feel about that" days and seems to finally fit-in with the NASCAR set. Sometimes it seems, however, that Vince Welch and Dave Burns are outsiders looking in.

Burns has a long history in the sport and has even called play-by-play for some Nationwide Series races this season. His pit road presence is better when he is being a nice guy and awkward when he is suddenly pushing for answers to issues ESPN has deemed important.

Vince Welch had a tough summer. After a July auto accident, Welch is back on pit road and working to get his NASCAR credibility. Some fans still remember his IndyCar background on TV that stretches back to 1999. Click here to see Juan Montoya respond to Welch's misguided attempt to create some issues from thin air last season.

As Friday progresses, it should be interesting to see the various on-air dynamics unfold between this rather diverse group or announcers. This is the time of the year when frustrations rise and ESPN quite clearly has not been experiencing the kind of results that the network expected when it signed the last NASCAR TV contract.

The night ends with coverage of the Nationwide Series race, which we will blog live right here at 7PM ET. Please join us then, but in the meantime leave us a comment on the ESPN TV team or the Friday coverage. This is a family-friendly website, please keep that in mind when posting. Thanks for taking the time to stop by.
Posted by Daly Planet Editor at 4:30 AM 9 comments: