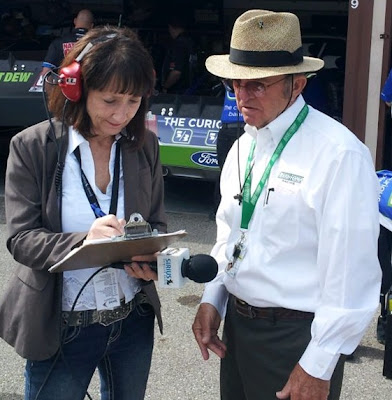 Jack Roush used to rule the track, but things have changed. Jimmie Johnson said today the groove is only one car wide around the entire track and it is going to be tough to pass for the Sprint Cup Series cars. The race may well be won on pit road or a restart.

ESPN has a big challenge. Once the field stretches out, the coverage has to find a direction and a theme. It can't be in-car cameras and tight shots. ESPN is going to have to work to tell the stories, recap the standings and tell lots of stories to fill these four hours.

The good news is that the announcing team is up to the challenge. The bad news is that the production truck continues to make one bad decision after another. No aerial shots or wide angles, few updates on drivers not in the top ten and no follow-up on drivers working their way back through the field.

Goodyear says there are no tire problems, so the only issues we should see may be engine related. There are eight start and park teams in the race today, so the actual competition for the win should come down to the usual suspects. The weather is good and even though Ryan Newman is reported to be under the weather, he has confirmed he will start the race and intends to see it all the way through.

We are going to be on Twitter with our live stream of TV/media comments on today's telecast. Please take a moment to join Twitter and see what all the fuss is about. We have drivers, teams, media and NASCAR officials all contributing to this live stream. Just type #TDP1 in the search box to see our conversation live and continually updated. Add #TDP1 to the end of your tweets to automatically be included.

There will be a post on this page when the event is over for your comments. Thanks to all of you for your patience while I was on vacation this week, looking forward to seeing how ESPN will handle this challenge today. Thanks to Roush PR for the picture at the top of the post.
Posted by Daly Planet Editor at 11:20 AM 13 comments: 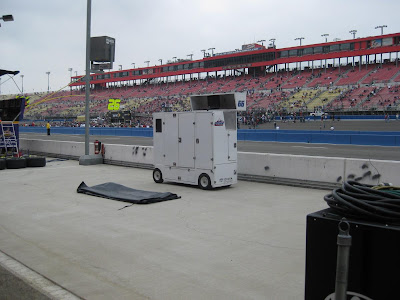 This weekend features two races on Saturday and one on Sunday. While the Chase is only weeks away for the Sprint Cup Series teams, the real theme of this big weekend for all three top series is starting and parking. As our friends at All Left Turns documented in this picture, only a tool box is needed on pit road for a start and park team.

Click here to review a Car and Driver article by Bob Zeller called "The Quitting Game." The story talks about the start and park teams that were operating back in 2008 and how NASCAR squelches any mention of this reality.

Click here to see FOX/SPEED's Larry McReynolds offer to then Miss Sprint Cup Monica Palumbo his reasons why teams start and park. McReynolds contends that these teams really want to race and also offer jobs to those who would otherwise be unemployed without the weekend of qualifying, starting and parking.

Click here to read Eddie Gossage's comments in 2010 that start and park teams in the Sprint Cup Series are literally stealing money from the sport and adding nothing to the show. Gossage further stated that NASCAR had an obligation to stop this practice.

Here are the starting grids for this weekend from the Jayski website:

Click here to see the Nationwide Series starters. Note the cars with the asterisk next to the entry.

Click here to see the Camping World Truck Series field. Of the 35 entries, note the teams with the asterisk.

In other professional sports on national television, the live telecasts document the reality on the field of play. Every injury, penalty and decision is reviewed, discussed and often replayed. In NASCAR the reality is the opposite. Television has somehow morphed into becoming part of the marketing arm of the sport.

This weekend, keep an eye on all three races and see how the different TV teams choose to deal with the start and park issue. The difference between reporting what is actually happening in the race as a whole and making a conscious decision to exclude relaying information about start and park teams certainly is interesting to watch.

Happy to have your opinion on this topic. Comments may be moderated prior to posting.
Posted by Daly Planet Editor at 5:00 AM 27 comments: