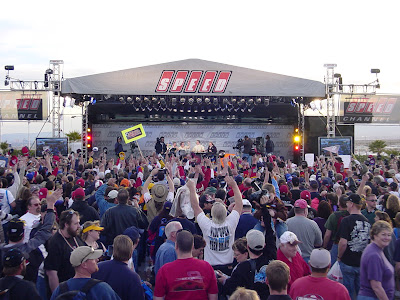 Over the last six years or so, there has been a TV dynamic at work in NASCAR that was quite unique. NASCAR's NEXTEL Cup Series was carried by Fox Sports, TNT, and NBC Sports. Most of the "support programming" like practice, happy hour, and qualifying was carried on SPEED Channel.

Viewers got quite comfortable with seeing TNT announcers like Bill Weber and Wally Dallenbach doing the early on-track sessions live on SPEED. The same was done for the NBC package. Lots of early parts were on SPEED. With Fox Sports, SPEED is actually a sister company also owned by Fox, so the announcers simply bounced back and forth between the two networks. Often over the years, many practice and qualifying crews were a combination of announcers from SPEED and the network broadcasting the NEXTEL Cup race.

In addition, SPEED literally surrounded the NEXTEL Cup events with a strong line-up of on-site programming including NASCAR Live, Trackside, RaceDay, and Victory Lane. While the NEXTEL Cup racing was on a non-SPEED network, fans knew to turn to SPEED for everything else.

On Friday of this week, all that changes. Enter ESPN, ABC Sports, and Disney. There will be no "sharing" of announcers for the rest of the season. You will not see Jerry Punch doing play-by-play on SPEED. You will not see Andy Petree offering analysis on SPEED. Add to that list Rusty Wallace, Brad Daugherty, Brent Musburger, and Suzy Kolber. The lines have been drawn.

This is an awkward situation for ESPN. There is no other venue where the network does not control almost everything on-site. There is no Fox Sports pre-game show before ESPN's Monday Night Football from the stadium grounds. There is no USA Network post-game show right after the last pitch of ESPN's Sunday Night Baseball. There is no two hour live preview show from the X Games venue on MTV or SpikeTV.

At Indy, ESPN will be up against a network that has worked hard to gain credibility in NASCAR by doing it the old fashioned way. They worked for it. Along the way there has been success with Trackside, RaceDay, and Victory Lane. There have also been failures like the memorable NASCAR Nation. But, SPEED hung-in there, produces a solid Craftsman Truck package, and even features NASCAR prominently on shows like the SPEED Report and WindTunnel.

When ESPN looks around at Indy, they will not see the College Gameday set with Chris Fowler, Lee Corso, and Kirk Herbstreit. They will see the SPEED Stage with Steve Byrnes, Jeff Hammond and Larry McReynolds. When ESPN looks again they will see John Roberts, Jimmy Spencer and Kenny Wallace staring back at them. That crew will be doing a two hour pre-race show at an "ESPN track" before an "ESPN exclusive race."

SPEED viewers are used to Wendy Venturini roaming the garage area for two hours during the RaceDay program that is telecast live just before the NEXTEL Cup race. During the 2007 TNT package, RaceDay actually overlapped with TNT's own ninety minute pre-race show. ESPN would not, and will not, ever permit that sort of thing to happen with SPEED. Just how far they will permit Wendy and RaceDay to roam in Indy remains to be seen.

ESPN has its own fleet of TV trucks, and its own army of technicians. But, at NASCAR NEXTEL Cup races, the TV compound is controlled by NASCAR's own official television and media production company called NASCAR Images. ESPN will have to nestle-in beside DirecTV's Hot Pass package, InDemand's Pay-Per-View in-car package, and the NASCAR.com RaceView package. For NASCAR Images, ESPN is just another client in this racing season. That's right, just another TV client in the NASCAR package.

All these issues have been given lip service by NASCAR, ESPN, and SPEED. Everything is going to be just fine they all say. Well, talking has been the only way to deal with these potential problems because until Friday they have not been real. There have been no conflicts, no problems, and no egos colliding into a screaming television mess. Rival fraternities have not been forced to live in the same frat house...until now.

As you go through the many live hours of NASCAR TV this weekend from Indy, try to appreciate the new dynamic in play. ESPN's previous coverage of the Busch Series has absolutely nothing to do with this. The network had been the "bottom feeder" to the NEXTEL Cup broadcaster. Now, with the click of another day in time, they are instantly the big fish in the NASCAR pond all the way through Homestead in November.

For veteran fans, the most interesting moment may be when SPEED begins to tape its Victory Lane show. This program begins taping when the winning car crosses the finish line in the NEXTEL Cup race. SPEED announcers watch over their shoulders as the winner comes into Victory Lane, gets out, and does the mandatory live TV interview. Then, almost immediately, the winner goes to SPEED for a Victory Lane interview with John Roberts and his co-hosts.

Imagine ESPN on-the-air live with the winning driver interview while SPEED tapes a TV show right behind them. Can you see ESPN allowing their "exclusive" winner interview to be shown later in Victory Lane as "background?"

Best of all, with ESPN SportsCenter, NASCAR Now, and the ESPN News Network waiting for interviews, can you really see ESPN giving up the winner of "their" Brickyard 400....to Jimmy Spencer and Kenny Wallace?

Stay tuned fans, this is going to get interesting...and probably by Sunday afternoon.

The Daly Planet welcomes comments from readers. Simply click on the COMMENTS button below, or email editor@thedalyplanet.tv if you wish not to be published. Thanks again for taking the time to stop by.
Posted by Daly Planet Editor at 7:30 PM 26 comments: