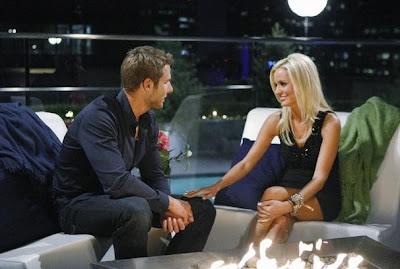 Some items of interest that came our way this week:

Monday night was the conclusion of The Bachelor on ABC. Emily Maynard, the former fiance of the late Ricky Hendrick and the mother of his daughter was the contestant chosen to marry Brad Womack. Various websites continue to report that the two are not going to get married in real life. Maynard is a TV veteran, having hosted the syndicated 3 Wide Life show several years ago. It should be interesting to see if Maynard winds-up on TV again and if her new role is associated with racing.

Rusty Wallace will move up from the infield and join Marty Reid and Andy Petree for the Nationwide Series race this Saturday afternoon on ESPN. Dale Jarrett has the weekend off.

Nicole Briscoe hosts NASCAR Now this week on ESPN2. Mike Massaro will travel to Bristol, TN as a reporter for the weekend edition of the show.

The most recent double-super top-secret NASCAR Fan Council survey asked if more of the actual pre-race activity, including concerts by musical groups, should be on TV. Fans have been asking to see the Bristol, TN pre-race either on TV or online for years. Wonder what the NFC is thinking about?

The History Channel has announced that it will be sponsoring the Nationwide Series race in May at the Charlotte Motor Speedway. The Top Gear 300 incorporates the name of a TV series with versions produced in both the US and UK. This sponsorship is from the US budget, so expect to see Rutledge Wood, Tanner Foust and Adam Ferrara front and center.

Apparently things are not working very well for the 2011 version of Inside NASCAR on Showtime. It looks like Randy Pemberton has been pushed aside for the new presence of Kyle Petty, but that has not made a dent. The show was downsized from one hour to thirty minutes and is struggling in this format. Showtime is leaning on uncensored scanner highlights that essentially keep the profanity on the team radio as an attraction for viewers. There is little in the way of conversation and analysis due to the time restrictions. Should be interesting to see if the series hangs in there after this season.

SPEED is front and center on Friday from the Bristol Motor Speedway as the network handles all the on-track activity for both the Sprint Cup and Nationwide Series. The network comes on the air at 11:30AM ET and ends with Trackside at 7:30PM. Even on Saturday, SPEED will handle the Nationwide Series qualifying in the morning before ESPN takes over for the 2PM race.

The television voice of the AFLAC duck, Gilbert Gottfried, has been fired. Gottfried is a comedian by trade and he posted several poor attempts at humor using the Japanese earthquake and subsequent tsunami as a topic on Twitter. AFLAC does 75% of its total business in Japan. One in four homes in Japan has residents insured by AFLAC. Gottfried was fired immediately after his social media blunder.

Jeff Gordon continues to be a popular talk show guest. He will appear on the Ellen DeGeneres show on Friday, March 25. Check TV listings for the time of the show in your area.

This post will be updated on Tuesday as more news items appear as the sport heads to Bristol. We invite your comments on the topics above. To add your opinion, just click on the comments button below. This is a family-friendly website, please keep that in mind when posting. Thank you for taking the time to stop by The Daly Planet.