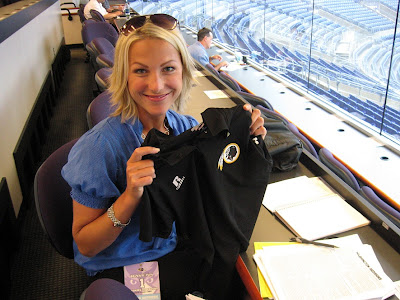 Here are some items of interest as we head to a split weekend with the Sprint Cup Series in Sonoma, CA and the Nationwide gang in Elkhart Lake, WI.

Wednesday it was announced by NBC4 in Washington, DC that Lindsay Czarniak was going to be leaving that local station where she had worked since 2005. Her new destination is ESPN. Czarniak is currently working at her part-time summer job hosting the six TNT Sprint Cup Series races. She will wait until July for the ESPN move.

Czarniak started her TV career as a production assistant at CNN after graduating from James Madison University. She has already worked two Olympics for NBC Sports in Turino and Beijing. Czarniak is a versatile on-air personality in the Krista Voda mode. That is someone who is at home in the studio, working as a reporter or hosting in the field. No doubt she will be a good addition to ESPN's on-air team.

Sticking with the ladies, SPEED's Danielle Trotta has been working as a field reporter for the RaceHub series. This weekend, she gets an interesting opportunity to try something new. With Voda hosting Trackside and Adam Alexander working for TNT, Trotta will take a turn anchoring the SPEED Center shows.

She will be handling the cut-ins and the Sunday morning preview show, but the big challenge will come Sunday night at 7PM. That one-hour version of SPEED Center is the most diverse motorsports show on the network. It will pull Trotta far outside the comforts of NASCAR.

Speaking of outside the comfort zone, four NASCAR drivers will appear in Sunday night's 10PM ET version of The Glades on A&E. Carl Edwards, Joey Logano, Tony Stewart and Brian Vickers filmed the episode earlier this year at Homestead-Miami Speedway.

"Shooting The Glades was a really cool experience," Logano said. "To see Homestead-Miami Speedway turned into a Hollywood movie set was certainly interesting. I can promise you this, I won’t be quitting my day job anytime soon. The show did an amazing job making the set and garage area look authentic. I know we had The Home Depot Toyota there, the extras were in our crew shirts and we even had our tool box in the garage stall. They did their best to make it look as real as possible and I think the NASCAR fans will appreciate that."

This weekend TNT will again have RaceBuddy at Sonoma. There will be a different look to it since Infineon Raceway is a road course. The free online service will continue to offer ten video streams, including four in-car cameras. TNT reports that RaceBuddy delivered over 700 thousand live video streams last weekend.

For you NASCAR history buffs, TNT's Pride of NASCAR feature shown in the pre-race will feature former driver Rex White. Now 81 years old, White competed for the original Chevrolet racing team and accumulated 28 wins and over 150 top ten finishes. He is in several halls of fame and was named one of NASCAR's top 50 drivers.

No Marty Reid this weekend for ESPN. Allen Bestwick gets the call to handle the Road America coverage with Rusty Wallace and Andy Petree. Once again, no coverage of practice or qualifying is offered by the ESPN networks. The actual race telecast is Saturday at 5PM on ESPN.

Speaking of no live coverage, on Friday SPEED is time-shifting the Sprint Cup Series qualifying from Sonoma to 11PM ET. The network instead is carrying six live hours of the Barrett-Jackson auction from Orange County beginning at 5PM.

This also means that the popular Friday night Trackside program on SPEED is out of luck. Krista Voda will host the show airing on tape delay Saturday at 11AM ET.

So, to sum it up there is no coverage of practice or qualifying for the Nationwide Series at Road America by ESPN. Also, three Sprint Cup Series on-track sessions, including qualifying, will be delayed by SPEED from Infineon Raceway for an auction and a sports car race.

We want your comments on these topics. To add your opinion, just click on the comments button below. Thank you for taking the time to stop by The Daly Planet.