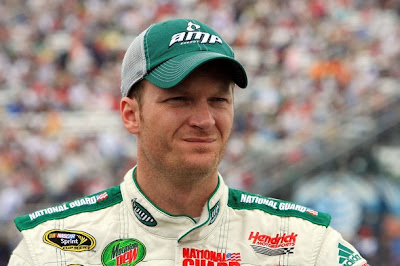 Halfway through the Monday review of the Sprint Cup Series race from Loudon, NASCAR Now host Allen Bestwick turned to a TV guest for more information on the race. It was ESPN.com writer David Newton. His topic was Dale Earnhardt Jr.

Earlier that day, Newton had written an article about Earnhardt for ESPN.com's NASCAR section. The thrust of the article was that Rick Hendrick had to step-in and manage Junior during the races. Newton said Junior was "having a fit."

Newton wrote that the main problem was Earnhardt's "expletive-laden rant(s)" and "radio tirades." Newton made sure ESPN.com readers knew exactly the words Junior had said by carefully using just enough letters to get his point across.

Last week, Earnhardt had joined Tony Stewart in speaking-out about ESPN's perceived poor treatment of NASCAR drivers and teams on-the-air. What Earnhardt had objected to was ESPN's use of team radio comments during the races. The network had replayed several audio clips of heat-of-the-moment comments much later without putting them in context. Some had been used for days.

"I think it's just poor taste by the networks and I am seeing it too often," said Earnhardt. "It's taking it too far where they're putting those type of conversations on network television and it's getting the kind of press it's getting. It's really about class...or the lack of it."

There is an interesting irony in seeing Mr. Newton and hearing him essentially repeat his ESPN.com story on NASCAR Now. Bestwick's Monday guest is usually a driver or crew chief who is in the news from the weekend races. The Monday show has consistently been one of ESPN finest NASCAR offerings.

In appearing on this program, Newton said Hendrick "for a few weeks now" had been monitoring Junior's radio. Newton indicated that Hendrick had turned "amateur psychiatrist" because Junior "gets out of control at times." Again, Newton made sure to mention that Earnhardt "starts yelling and screaming profanities" at Tony Eury Jr. during races.

Hendrick was interviewed after the race. "The fans probably think that he (Junior) wants to rip Tony apart," said Hendrick. "Then he gets out of the car and wants to hug him. If he can just focus, they have a real shot at this thing."

What Hendrick was trying to give Junior on the radio was referred to as "old man experience" by the veteran owner. At the end of Newton's appearance, Bestwick stated that Earnhardt is "always emotional" on the team radio. When asked if this was something new for Junior, Newton said "he was about the same" at Loudon as the other races.

Newton tried one final time to sell this story. "He (Earnhardt) says stuff to Tony Eury Jr. that you wouldn't say to your worst enemy at times and that's got to have an impact," said Newton. All of this hype, it turns out, was over a set of tires.

Earlier in the show, Junior had talked about how just one bad set of tires put him back in the field and he just did not have the time to get back up to the front. In his first Chase race for Hendrick, that had him upset. In a post-race interview with an ESPN pit reporter, Earnhardt was polite and thoughtful.

Todd Bodine, Ray Evernham and Mike Massaro made up the panel for this program and added their thoughts. Evernham suggested that Hendrick will sit the team down and preach his philosophy of respect. Bodine wanted to make sure Junior knew he was the quarterback on the team and everyone took their cues from him. Massaro wondered if Earnhardt will change his style to the non-emotional and more analytical approaches of teammates Jimmie Johnson and Jeff Gordon.

NASCAR Now touched on all the race highlights, including a good review of the Kyle Busch situation. An added touch was a good decision to show Craftsman Truck Series highlights that included the post-race fracas and let Bodine explain what happened. In talking about the meaning of Hornaday's win after the steroid hype, Bestwick made sure to say that was an ESPN the Magazine story.

Things certainly get interesting this time of year when the pressure is on for all those concerned in the sport. Bestwick let Evernham completely off the hook as an owner, even as the Jayski.com website is reporting that GEM is set to buy Bill Davis Racing. That is a huge story that should have been covered.

Bodine was again fun to watch and plain-spoken as usual. Massaro is an observant and thoughtful reporter who has really lent a hand to this series each week with his journalistic perspective. Next week, Boris Said will join Evernham and Massaro on this program that airs each Monday at 5PM Eastern Time.

The photo at the top of the page is Earnhardt in Loudon before the race courtesy of Getty Images.

Here is the link to the David Newton story:
Hendrick Busy Being Referee

The Daly Planet welcomes comments from readers. Simply click on the COMMENTS button below and follow the easy instructions. The rules for posting are located on the right side of the main page. Thank you for taking the time to stop by.
Posted by Daly Planet Editor at 9:15 PM 112 comments: 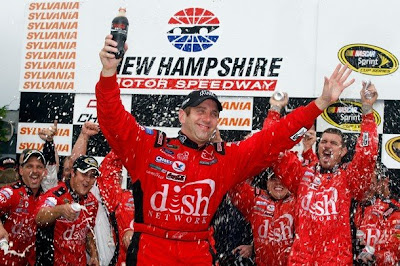 The theme of this week where TV is concerned might simply be "expect the unexpected." This Week In NASCAR on SPEED has worked hard all year to make itself into a program that fans can once again enjoy.

This Monday, TWIN had a very unexpected pleasure. Loudon winner Greg Biffle was on the panel with Michael Waltrip and host Steve Byrnes. Biffle had been struggling and this was going to be a great moment for him on SPEED. Then, a strange thing happened. His name was Clint Bowyer.

After a brief conversation with both Biffle and Waltrip about the weekend, Byrnes normally turns to the race highlights and the fun begins. This week, Byrnes introduced a two-segment feature on Clint Bowyer. Fans first saw Bowyer at the NASCAR media day in New York City and then a second segment aired following Bowyer through his weekend in Loudon.

It was not until twenty minutes into the program that Biffle and Waltrip finally got to participate in their own show. This was especially ironic because once again the pre-recorded segments really took the momentum out of the episode. A panelist had actually won the first Chase race and TWIN viewers had just spent a long time watching a feature about Clint Bowyer.

Byrnes led the team through the highlights and Biffle talked about a lot of interesting topics where Roush-Fenway Racing was concerned. Changes on the pit crew and sharing his set-up with Carl Edwards for the race were two good notes. Once the highlights were over, the gang was back in good spirits but thirty minutes of the show was now gone.

A shot-in-the-arm for this Monday was the second appearance of Humpy Wheeler. His pre-recorded monologue about Bob Bahre and Bruton Smith was something only veteran NASCAR fans could understand and this was the right place for it. The NASCAR Media Group should have fun expanding and working on Wheeler's role in this show. Hopefully, he will return for 2009.

Waltrip had fun with the Truck highlights and that is exactly what the series needed. An taped interview with Ron Hornaday should have been included, especially after what Hornaday dealt with during the week before he dominated and won the race.

The two veterans on the set then talked about Dover. It was very informative and showed exactly why this show fills a void. Waltrip was fun and entertaining even as Biffle added the facts about today's racing at the Monster Mile. The panel had a good feeling that Biffle might have a shot at making it two in a row.

A look back at the 2007 Dover race was well-edited and showed-off once again what The NASCAR Media Group does best. Reminding viewers of what is coming up next by using the images and sound from the media coverage of the event has been a trademark of NMG.

It still is not clear why the Bowyer segments were in this show or even what they meant. Biffle should have been front-and-center and the highlights from Loudon should have lead the program. After a long battle this year to show the race review before any other program features, it certainly was an interesting call to change the order this week.

The Daly Planet welcomes comments from readers. Simply click on the COMMENTS button below and follow the easy instructions. The rules for posting are located on the right side of the main page. Thank you for taking the time to stop by.
Posted by Daly Planet Editor at 8:22 PM 33 comments: