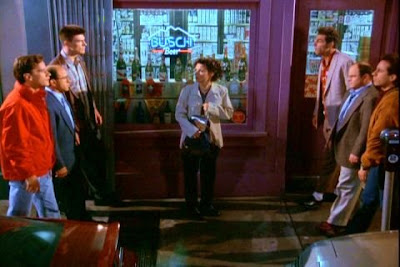 The TV version of Seinfeld's "bizarro world" was on full display Saturday from Dover. This is the episode where everything was opposite and Elaine wound-up with a new cast of friends who looked a lot like her old cast of friends. When a stunning blond eyed George in the coffee shop, he told her he was unemployed and lived with his mother. She loved it.

This season, the ESPN gang has been taking it on the chin for all kinds of struggles from the unfocused "how does that make you feel" pit reporters to the disinterested play-by-play announcer calling out driver names and car numbers in between commercials.

Meanwhile, the SPEED team calling the Camping World Truck Series races has been fun to watch and focused like a laser beam on the racing. Saturday, all of that changed in a very strange way. NASCAR's version of "bizarro world."

Big Brad Daugherty set the changes in motion with his infectious enthusiasm during the pre-race show as he fired-up the TV viewers for the Nationwide Series race. Instead of his usual politically correct spin, Daugherty was right on the money with his wild and very loud opinions of Kyle Busch.

Daugherty talked right over-top of Dale Jarrett and cut-off Allen Bestwick. He just did not want to hear it. The soft-spoken Carolina guy was long gone. Daugherty was an unabashed seven-foot tall finger-waving NASCAR cheerleader who was ready to watch Kyle Busch dominate.

Instead of the tired and disinterested Jerry Punch viewers have known for years, in his place was a polished and excited TV professional who focused on the action and let every member of the TV team participate in the broadcast. Who was this guy?

Punch made the Dover Nationwide Series race interesting by including all the members of his team and running his pit reporters around like sprinters. Dale Jarrett and Andy Petree were not dominating the commentary. The reason was simple, Punch did not need their help. This was an entirely new dynamic at work and it got even stranger.

The very same TV production team that painfully follows the ESPN script and gets upset when it changes turned into flexible and open-minded NASCAR fans who regularly searched for the best racing on the track and showed it to the fans. OK, what happened to our regular TV guys?

The three pit reporters hustled and were pushed by the broadcast booth to get stories while they were in-progress. This time, there was no perky Jamie and stuttering Shannon to drive TV viewers crazy. The only thing fans heard was information and the hustle lasted all race long. Even Dave Burns was up on the wheel and asked key questions after the race to pay-off the on-track stories.

Tim Brewer showed-up when he was needed, Allen Bestwick recapped the action at the right times and the fireworks at the end of the race made for some moments that fans will remember for a long time. From Logano looking like he was about to cry on pit road to a livid Kyle Busch fleeing the ESPN reporters yet again, this was a fun and interesting NASCAR TV telecast by the ESPN team.

Due to the Friday rain out, SPEED televised the Camping World Truck Series race right after the ESPN crew finished with the ABC telecast. Krista Voda is one of the most solid NASCAR personalities on TV, but the vibe was not there from the truck team.

Michael Waltrip was over-selling himself, his sponsors and NASCAR long before the drop of the green flag. Waltrip had made himself into a very good third man in the booth, but what happened to him in this telecast almost defied logic. His "spin" of the Goodyear reality in this event should have won a public relations award.

Rick Allen is one of the most dependable and energetic play-by-play guys in the sport, but he was soon to be confronted by a problem that caused the entire broadcast to crumble. Allen made the decision to treat the catastrophic tire failures in the field as just racing incidents. They certainly were not.

Truck after truck fell victim to this problem that NASCAR and Goodyear could not solve. Phil Parsons documented how many laps the trucks could go before the tires popped, but never called for a competition caution for driver safety. Parsons stepped-back instead of up and watched as this issue decimated the field and the race.

Instead of racing, the final segment of the event literally came down to a winner whose tires did not blow. Like Reutimann in the rain, a decision not to pit won the race. The fast trucks were either crashed out, damaged or had drivers not willing to risk injury. The second half of this race was a TV disaster.

At the end of the doubleheader, the reality of the switch hit home. ESPN had stepped-up and done a great job of presenting a Nationwide Series race that featured few passes for the lead but lots of action behind the Busch and Logano freight train. The key was that the producer threw away the script and showed the racing, wherever it was on the track.

SPEED had been shaken by the tire failures in the race and never made a decision about what to do or how to handle this issue on the air. Allen was still calling the race as if it was a competition, rather than a dangerous exhibition of basic equipment failure.

How and why the TV teams decided to change places for this doubleheader is unknown. Having ESPN hit it out of the ballpark and SPEED strike-out is a very new experience.

Seeing Kyle Busch lose two races he dominated in two different series on two different TV networks on the same day was wild. The difference of hearing Punch excitedly call the final restart and Allen try to figure out what to say about Brian Scott was also interesting.

On Seinfeld, the next episode returns everything to normal and the gang moves on to tackle another issue. The ESPN Nationwide team heads for Nashville, TN and a stand-alone race next Saturday night. They have to be pleased with their Dover effort and pumped-up that July brings them to the Sprint Cup Series.

The SPEED team moves next to the high-speed oval in Texas for a CWTS race under the lights on Friday night. That should give them an opportunity to open things back up, shake off the tire issues and get themselves back on track.

If there is one thing broadcasters have learned the hard way over the years, fans will forgive a lot if you just give it to them straight. NASCAR's fan-base established a "no spin zone" long before the cable news networks.

This was a Saturday to remember for both good and bad reasons. While Kyle Busch will no doubt be the theme of most media reports, the side-by-side comparison of two veteran NASCAR TV networks might have yielded the strangest results of all.

TDP welcomes your comments on this topic. To add your TV-related opinion, just click on the comments button below. This is a family-friendly website, please keep that in mind when posting. Thank you for taking the time to stop by The Daly Planet.
Posted by Daly Planet Editor at 6:45 PM 22 comments:

Live Blogging The Sprint Cup Series From Dover On Fox 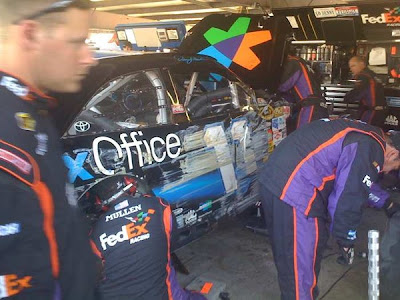 This final Sprint Cup Series race on Fox has suddenly emerged as one with multiple storylines underway. There has to be a mix of apprehension and excitement at the TV crew prepares for four hours at Dover.

NASCAR's Ramsey Poston announced that the decision had already been made to stop the race at lap 30 and check the tires. Saturday, the CWTS event turned into a disaster for Goodyear and NASCAR with right side tires blowing before a full fuel run was complete. Added to that problem were the current rules of choosing either fuel or tires on each pit stop in the truck series.

There was another major rainstorm on Saturday night at the track was scrubbed clean of the small amount of rubber put down by the Nationwide and CWTS events. Dover is a concrete track and the fear is that the COT will scrub the rubber off the right side tire very quickly on this abrasive surface.

Added to this mix is the continuing Dale Earnhart Jr. story. Lance McGrew was supposed to be starting in his role next week, but since Brad Keselowski did not make the Cup race, McGrew will be on Junior's pit box this Sunday along with multiple Hendrick Racing veterans.

Kyle Busch dominated both the Nationwide and CWTS races on Saturday and didn't win either one. Fox continues to focus on Busch and it should be interesting to see how DW handles this issue on the final race for the network of the season.

Dover makes good pictures, especially from the low level speed shots. Those are the cameras that do not move and let the cars fly by with great audio. Remember, Dover has two bridges over the track at each end of the backstretch. One mandatory TV element is to eliminate these two structures from the telecast.

The only times that the two bridges will be seen are from the aerial shot and also when a driver's in-car camera is being used. Look carefully on the shots from the roof, out the front window and out of the rear of the car to see the bridges fly by.

Digger's last day should be interesting. Recently, the animated character has been pulled back a bit after fans made it clear they had reached the breaking point. That is perhaps the biggest issue, how to judge just how much of something like this is enough. Look for the final cartoon, the animation over restarts and the still shot of Digger on the low-level cameras.

This TV team is the most experienced of all the NASCAR TV partners. Chris Myers will lead Darrell Waltrip and Jeff Hammond onto the air from the Hollywood Hotel at 1:30PM for the pre-race show. This should set the tone for how Fox is going to approach the race today.

Larry McReynolds posted on Twitter that the theme of the race today for the NASCAR on Fox team was going to be having fun. That may be tough with tire problems, Junior stories and Kyle Busch on a rampage. Add to that a couple of hard crashes and Dover may become exactly what is almost always is, a big grind for all concerned.

Mike Joy, McReynolds and Waltrip should be on the air around 2PM and the green flag flies fifteen minutes later. Krista Voda, Steve Byrnes, Matt Yocum and Dick Berggren will handle pit road. This is the cream of the crop where TV pit reporters are concerned and this race will certainly keep them busy.

This post will serve to host your comments about the Sprint Cup Series from Dover on Fox. To add your TV-related opinion, just click on the comments button below. This is a family-friendly website, please keep that in mind when posting.

Thanks for taking the time to stop by The Daly Planet.
Posted by Daly Planet Editor at 12:47 PM 569 comments: