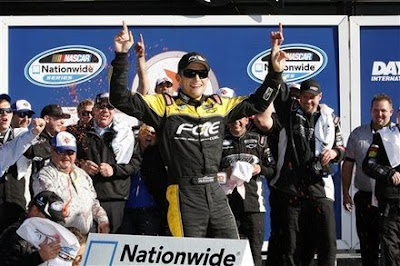 ESPN got into the act with an abbreviated post-race show after SPEED did the same in leaving the Camping World Truck Series on Friday night. ESPN had a whopper of a Nationwide Series tilt on Saturday afternoon with mangled machinery and lots of stories to pay off.

What these two networks have in common is that they both cover these respective series exclusively. It was NASCAR's intention that these two support series would benefit from being on only one network for the entire season.

SPEED left without speaking to lots of folks for the debut of the Car Warriors show. It was thirty minutes later than scheduled, but it was the network itself that scheduled it after a live event. There is absolutely no guarantee that a race will end at a specific time.

ESPN had a big ACC college basketball game ready to go as the Nationwide Series race dealt with a late red flag period for SAFER barrier adjustments after an accident. The race telecast ran past the tip-off, so ESPN started the game on the ESPN3.com website.

After the race surprise winner James Buescher, shown above, got the checkered flag. But it was what happened on the last lap that made the network's hasty escape annoying. Granted, this race was something of a mess but that is the nature of the beast at Daytona.

One driving force behind the discontent with post-race shows is social media. NASCAR race information is available on almost a real time stream on Twitter and a slower but more informative platform on Facebook. These two content streams often reflect what is going on at the track and the resulting frustration is that the network TV coverage has long since departed.

A lot of folks have weighed in on this topic. As we mentioned, on one side is a fan base who just enjoyed a Nationwide Series race with free live scanners, a RaceBuddy video feed and top of the line network TV coverage. More post-race content would have updated the stories of the race.

On the other is those who believe the race is over when it's over. They feel it is not the TV network's responsibility to show an extended post-race for either the Trucks or Nationwide Series.

The point is that the Sprint Cup Series is already surrounded. Four hours of pre-race shows on three different networks precede every single race. Sunday, it will be five hours for the 500. After each race, SPEED offers multiple hours of recap shows while ESPN uses SportsCenter as a platform for post-race coverage.

Minutes after SPEED left the air on Friday, fans were posting pictures on social media of the hole torn in the frontstretch catchfence after the big crash on the closing laps. The network never updated this situation. Questions were being asked about fan injuries or the situation for the race on Saturday.

After the Nationwide Series race, fans were asking if their favorite drivers were OK after the big crash. Also, they asked for a full field rundown and why Danica Patrick did not talk to ESPN after her crash.

In a way, fans asking for more live post-race TV coverage is a great sign. Interest in both series was solid heading into this first race and the action in both races certainly was exciting. The question is, how should post-race live coverage be delivered?

We have seen both SPEED and ESPN stream content online before with great success. The problem is that type of content is scheduled in advance. The very nature of NASCAR is still at the core of the issue. Once the green flag flies, the time of the checkered flag is anyone's guess.

This is the final season for the NASCAR.com website to be operated by Turner Sports. Next year, NASCAR itself will be in charge and that should result in some major changes. Post-race content has to be high on the list as this topic has been debated for several years now.

If you watched the ESPN Nationwide Series telecast, did you get the feeling they rushed off the air? What stories or information did you miss? If ESPN has shifted coverage online would you have watched? How about some suggestions on how to handle this situation in the future?

We want your comments on this topic. To add your opinion, just click on the comments button below. Thank you for taking the time to stop by The Daly Planet. 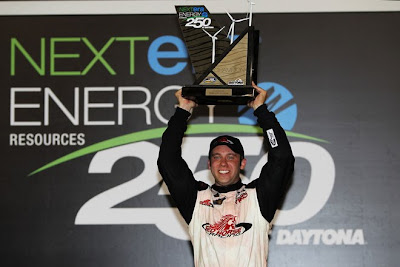 The debut of the Camping World Truck Series was held Friday night at the Daytona International Speedway. Basically, it was a freight train ride for the first three-quarters of the race mixed with some isolated accidents. No one was injured.

The final portions of the race consisted of several accidents involving key personalities in the sport. Ultimately, the final laps were marred by an accident that saw one driver's truck get up into the catch fence in front of the grandstands.

The race ended at 10:20PM, which was 20 minutes longer than SPEED had scheduled for the event. After getting the drivers back around to pit road, the network did some brief interviews of the top three drivers and the winning owner before departing in what some called a hasty manner ten minutes later.

What was scheduled for 10PM was the debut of a new season of Car Warriors. This "reality" TV show was panned last year and resulted in a lawsuit claiming the producers manipulated the outcome to make the best TV, not produce an honest result. On Friday night, this show started 30 minutes late.

A pretty hefty debate quickly got underway with folks making points on both sides. Here are some of those issues and then you can throw in your two cents.

Here were my points to argue:

The Camping World Truck Series is the only major NASCAR series carried on SPEED from start to finish. The focus should have been to take as long a time as needed to take care of the stories that unfolded during the race.

This is the best opportunity for SPEED and NASCAR to get fans involved in the personalities of the drivers, including the rookie winner of the race. That gives the fans a reason to then tune into the next event and develops fan interesting for the season.

The final accident put a truck into the catch fence and appeared to completely flip the truck over while airborne. TV should have updated the viewers on the status of those involved and any injuries to fans before departing. Also, significant damage to the catch fence could affect Saturday's on-track activity.

Here is the other side of the coin:

The network had already run 20 minutes past the scheduled off time and allowed ten more minutes for interviews prior to departing. The entire telecast ran 30 minutes long.

The trucks are not a major series and the fact that they kept wrecking over and over again is what forced the race to run long in the first place.

TV is not obligated to stay past the checkered flag and in this case allowing time for interviews made sure viewers got to see some key drivers before departing.

Where do you come down on this issue? Did you watch and were you confused that the network left hastily to a non-live program? Did you know where your favorite driver finished prior to the end of SPEED's telecast? Do you think SPEED did the right thing and the network's own business and programming agenda comes first?

We invite you to share your thoughts by clicking on the comments button below. Thank you for taking the time to stop by The Daly Planet.