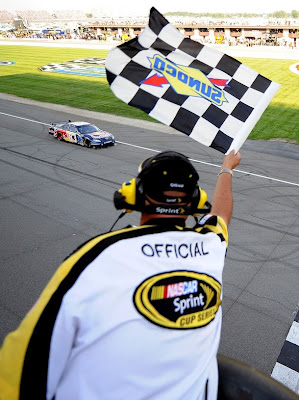 Sunday afternoon ESPN offered a one hour pre-race show and then live coverage of the Sprint Cup Series race from Michigan. This is an opportunity to offer your opinion of the TV viewing experience.

It was Allen Bestwick, Rusty Wallace, Brad Daugherty and Ray Evernham beginning the coverage from the ESPN Infield Pit Studio. The group welcomed Rick Hendrick as a guest and also reviewed a lot of topics relating to the Sprint Cup Series.

Race coverage was anchored by Jerry Punch. He was joined in the announce booth by Dale Jarrett and Andy Petree. On pit road were Jamie Little, Shannon Spake, Dave Burns and Vince Welch.

The purpose of this post is to allow fans to offer their thoughts immediately after the ESPN telecast is over. We are not going to offer our opinion, which will eliminate TDP as an issue in the comments.

Your comments can be of any length, there is nothing to join and we do not need your email. You can be totally anonymous with your opinion. Just click on the comments button below. This is a family-friendly website, please keep that in mind when posting.

Thanks for taking a moment to let us know what you thought of the ESPN telecast of the Sprint Cup Series race from Michigan.
Posted by Daly Planet Editor at 5:20 PM 118 comments: 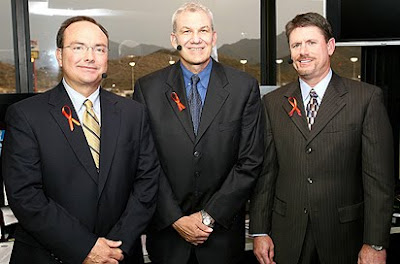 There are a lot of potential topics on the menu for this program. Saturday's Nationwide Series race ended with a bang both on and off the track. Race winner Brad Keselowski will be in the Sunday Sprint Cup Series event. So will Kyle Busch and Brian Vickers, the pair who led most of the race only to lose it on the final laps.

MIS is known as a fuel mileage track, but today the new NASCAR restart rules may add a twist to the single-file fuel runs. Pit stops will also be critical, both under caution and green flag conditions.

It will be Jerry Punch calling the action for ESPN with Dale Jarrett and Andy Petree alongside. Jarrett and Petree handled the play-by-play for the Saturday Nationwide Series race as a part of ESPN's "Backseat Drivers" coverage. Punch struggles on big tracks like this where multiple storylines have to be juggled from the start.

This is the time of the year when tempers are tight in the Cup garage. The ESPN pit reporters are going to have to think before they speak to avoid the kind of moments that ESPN has recently experienced on pit road. Dave Burns, Jamie Little, Shannon Spake and Vince Welch are the reporters.

Three elements have pushed ESPN's NASCAR coverage in a strange direction. The ill-advised use of in-car cameras, the use of pre-recorded material under green and the strange belief that the playback of old team radio conversations is important.

In-car cameras remove the perspective of the TV viewer. They are awkward to use after restarts or when cars are racing in a group. Cutting to them because they are available seems to be the current practice. Higher and wider shots made TNT's summer coverage exciting. Frequent in-car camera shots are ruining ESPN's efforts.

Since ESPN's Sprint Cup coverage began, the network has been playing back "soundbites" from drivers who are seated in front of a video window. While the recorded material plays, the live race is shoved in the video box. Instantly, the excitement of the racing is gone while viewers listen to dated comments on various topics. Nothing sucks the intensity out of high-speed racing like this feature.

Many NASCAR fans use the technology available online to listen to their team's radio channel. TNT even offered a free audio feed during the summer races via RaceBuddy. ESPN records the radios and then stops the telecast to have a pit reporter introduce the audio clip about to be replayed. By the time all of this happens, the race has moved on. Either use it live or lose it.

Multiple storylines will continue at MIS. Teams racing for the win with nothing to lose, those racing to make The Chase and some trying to put on a good show simply to survive. Tires, fuel and strategy will be a key challenge for the TV team.

This post will serve to host your comments about the Sprint Cup Series telecast on ESPN. To add your TV-related opinion, just click on the comments button below. This is a family-friendly website, please keep that in mind.

Thanks for taking the time to stop by The Daly Planet on this weekend.
Posted by Daly Planet Editor at 11:15 AM 586 comments: