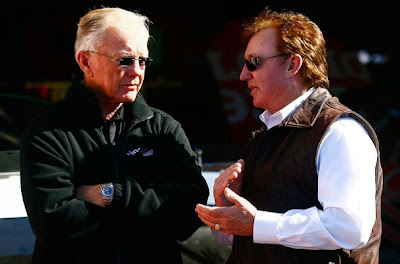 Tuesdays are normally when NASCAR penalties are announced, but just like the incident itself, things were a bit different when it came to veteran owner Richard Childress. That is Childress above shown speaking to fellow owner Joe Gibbs.

After already exonerating Kyle Busch in the weekend tussle, the sanctioning body announced on Monday the penalties for Childress. It was a 150 thousand dollar fine and probation for the rest of this season. That drew a quick response from both the fans and the media.

On the social media side, things were plenty busy on Twitter.

"I wonder if Pop Pop will get a senior citizen discount on his fine?" tweeted Austin Dillon.

"According to Forbes, Richard Childress Racing has a value of $158 million and last year made a $5.9 million profit. A $150,000 fine for RCR isn't going to harm them too much. Just as Childress' punches didn't harm Kyle Busch. They could probably make that up with an RCR golden gloves diecast," tweeted SPEED.com Editor-in-chief Tom Jensen.

"Only issue like this from RC we have ever had. Long-standing member. Don't see it repeating. Kyle fans unhappy/RC fans unhappy. That's understood, it's our job to make decisions, not always popular but part of it. Thanks for the feedback," offered NASCAR VP of Operations Steve O'Donnell on Twitter.

On the TV side, NASCAR Now on ESPN2 was up first. Host Allen Bestwick seemed rather surprised by some of the strong opinions expressed by his panelists on the show.

"I think it (the penalty) might have been a little bit light," said panelist Ricky Craven. "What if Kyle Busch had been injured or somehow wasn't able to race the next day? That's why a precedent has to be set. Drivers accept the risk of what they do on the racetrack, but Richard was not on the racetrack."

"We heard Mike Helton talk about the severity of these things that go on," said Johnny Benson. "I really thought he was going to get some races (off). This is kind of different with an owner getting involved, he's lucky."

"After a man tears my race cars up so many times, I might just go kick his ass," said Tim Brewer. "I'm tired of hearing about the drivers. Richard Childress does not sell cars, he sells racing. He is a dedicated person to that and I don't blame him for what he did."

The second and final TV series of the day was RaceHub on SPEED hosted by Steve Byrnes. Larry McReynolds and Elliott Sadler are the usual Monday panelists.

"Joey Coulter, he has struggled a little bit this year in the NASCAR Camping World Truck Series," said McReynolds. "He finishes fifth and there is not a mark on that truck and Kyle Busch door-slams it after the checkered flag and puts a lot of damage on it. I just think it pushed Richard Childress over the edge."

"I do know for a fact," continued McReynolds. "He (Childress) told Kyle Busch if you want to confront my driver on my race team that's fine but leave the race car out of it. I felt like 150 thousand dollars was a little strong."

"I think when he (Busch) pulled up and ran into the side of the 22 after the race, it just sent him (Childress) over the top," said Elliott Sadler. "Honestly, as a driver, if my owner is going to stick his neck out on the line for me like that it says a lot for Richard Childress as a person and an owner."

"Honestly, I would love to race for a team owner like that," continued Sadler. "It's like all for one and one for all when you are messing with RCR. It's always been like that."

You can use the links on the right side of this page to read more on this topic from NASCAR websites and blogs. It was interesting to see the various opinions being offered on this rather unique topic.

What we are looking for is your take on how the media handled the Childress suspension and how you got the news about this topic. It was a Monday theme on TV, radio and online. To add your comment, just click on the comments button below. Thanks for taking the time to stop by The Daly Planet.