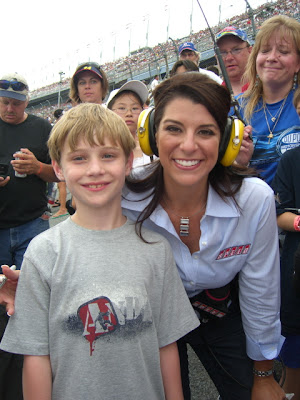 As a part of SPEED's NASCAR Pre-Season Thunder, the network will cover the always interesting Charlotte Media Tour on Wednesday and Thursday with shows at 7PM.

This new wrinkle in the SPEED schedule will be interesting. The Media Tour is essentially a press junket organized by Humpy Wheeler and the gang at Lowe's Motor Speedway back in 1983. Wheeler wanted to generate some publicity about the sport as the new season closed-in.

"The Media Tour allows the journalists to convey excitement and enthusiasm (about the upcoming season) to race fans around the world," said Wheeler.

There are more than 200 journalists this year on the tour, with print, Internet, radio and TV represented. The format is simple, get on a bus and get off where you are told. The tour begins with NASCAR's R&D center in Concord, and then moves on to shops, several museums, and even a new big wind tunnel built in the area.

SPEED will forgo the first two days of the Media Tour to concentrate on Nationwide testing at Daytona, and then pick-up the final two days with shows on Wednesday and Thursday.

Wendy Venturini and TV veteran Randy Pemberton will anchor the SPEED coverage. These two are very good choices by the network, because they both have roots that run deep in racing. They can easily talk to anyone on either the team or media side of the business.

This is a first effort for SPEED, and is a part of that network really stepping-up and taking hold of the pre-season as its own franchise. While websites and print reporters have filed stories, the only other national TV presence is reporter Marty Smith who is filing news pieces for both ESPN News and SportsCenter. The NASCAR Now series on ESPN2 does not start until Monday, February 4th this year.

Hopefully, the two days of shows will fill viewers in on exactly what went on, and cover both the team and media issues that fans are interested in. SPEED viewers have already seen the Sprint Cup drivers on-camera from Daytona testing, so the challenge for Venturini and Pemberton is go to behind-the-scenes and get the stories not already being reported.

Please feel free to post your comments about these two program by clicking on the COMMENTS button below and following the easy instructions. There is nothing to join, and we do not want your email address. We would just like your reaction to the new SPEED programs on the Charlotte Media Tour.
Posted by Daly Planet Editor at 9:00 AM 29 comments: