The Queen Of Social Media 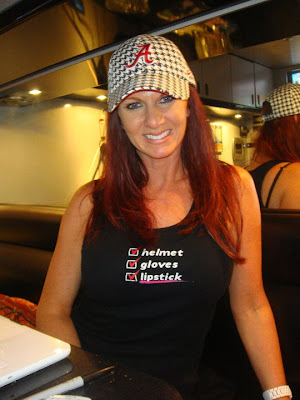 You might not know her name or even her face. FOX, ESPN and TNT don't know she exists. She has never won a major NASCAR race. She does not live in North Carolina. She does not sacrifice her dignity in TV commercials. She does not have a rich family.

Yet, Jennifer Jo Cobb has some of the most loyal fans in NASCAR. Cobb races full time in the Camping World Truck Series and runs a limited schedule on the Nationwide side. Although she has not yet won, to many fans that is not important.

In a racing world of egos and millionaires, Cobb is a refreshing change. Since her entry into the truck series, Cobb has chronicled her NASCAR experiences firsthand. Using her marketing and journalism background, Cobb has sidestepped the mainstream NASCAR media and created a direct link with her fans.

There is perhaps no better example in NASCAR of someone who has used social media, amateur NASCAR blogs and the Internet to develop effective sponsor exposure and a strong fan base. All of this is necessary due to one well-known fact.

"No one covers trucks, they just don't," said a popular NASCAR journalist to me in November. The drivers who get the most attention on TV in the truck races are the cross-overs from the Sprint Cup Series. Kyle Busch and Kevin Harvick are big draws when they race a truck. For a single truck team owner/driver like Cobb, there is simply little help with exposure from the NASCAR media.

Cobb's answer was to make it personal. She has a thriving community on Facebook of pages for both her race team and for herself as a driver. On Twitter, Cobb speaks easily with fans and has created lasting bonds with many. The Internet is full of NASCAR blogs with stories and features on Cobb.

Here are just a few. Click on the title to read the story.

Jennifer Jo Cobb Is Quietly Making A Name For Herself from Female Racing News.com in October.

Women In NASCAR Series: Jennifer Jo Cobb from Skirts and Scuffs in October.

Beyond The Cockpit: Jennifer Jo Cobb from Frontstretch in April.

The bottom line is that there has never been a better time for a female driver to make inroads in the sport. Even with 50% of the fan base being female, it's apparent that Danica Patrick did not click with the stock car set.

Cobb has a racing heritage from the Kansas City area where her father still battles on the dirt at Lakeside Speedway. Unlike Danica, fans have been able to watch Cobb make her way into the sport and interact with her from the start.

We all know the big sponsors in NASCAR, but there is just something about an owner/driver who started out with sponsorship from the Kansas City T-Bones Baseball Club, Wagner's Collision Repair and Take-N-Bake Pizza. Cobb is old school and makes no bones about where she came from and where she wants to go.

This year, some help did come from SPEED. The network televises the Camping World Truck Series and featured Cobb dressed as Ginger in the annual Halloween pre-race show. It got Cobb some TV exposure, but more than that it showed her as someone who gets it. A driver not too self-important to poke fun at themselves.

Tuesday, Cobb continues to leverage her position in the sport by appearing on CNN. In the 10PM ET Anderson Cooper 360 show, Cobb will be talking about the very different lifestyle that she has chosen both on and off the track. It's ironic that during the dark time for NASCAR on TV, the only person getting national TV exposure is a mid-pack single team truck series owner/driver.

In February, Cobb is set to make another splash when she shows up in NASCAR 2011: The Game. The new official NASCAR video game offering will have Cobb in the #13 red Ford Fusion with her own racing apparel company on the hood as the sponsor. This will put Cobb on the track with the big boys on gaming systems around the world.

There are plenty of young female drivers currently lurking just outside the three major NASCAR series. There is little doubt that they are watching Cobb navigate her way through the sport in control of her own team with financial and management responsibility. In this changing economy, Cobb may just be laying down a blueprint for female drivers to follow in the future.