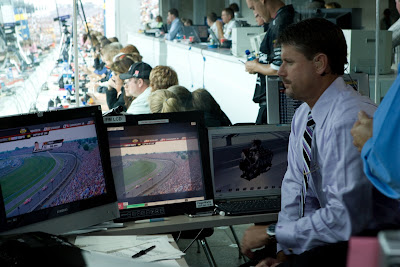 Over the last three weeks, it has fallen to SPEED to present the Friday coverage of practice and qualifying for both the Nationwide and Sprint Cup Series. Viewers have seen the smiling faces of Steve Byrnes, Jeff Hammond and Larry McReynolds all day long as SPEED worked to make these sessions fun.

This Friday, the coverage switches to ESPN2. The network will offer over ten hours of NASCAR TV on Friday alone. It will be a very long day for Dr. Jerry Punch, Dale Jarrett and Andy Petree. With bad weather threatening, there should also be a whole lot of stories for the ESPN pit reporters to track down.

Punch and company will present highlights of the 8:45AM Nationwide Series practice at 10AM. This one hour recap show will lead directly into the 11AM live coverage of Sprint Cup Series practice.

After a three hour break, the ESPN gang will return at 4PM to cover the Nationwide Series qualifying live. This session should run for about ninety minutes and will be followed by a studio-based version of NASCAR Now from Connecticut at 5:30PM.

Next-up are the big boys, as the Sprint Cup Series takes to the track for qualifying at 6PM. This will kick-off a multi-hour live block of on-track action.

NASCAR Countdown is next to set-up the Nationwide Series race and Allen Bestwick, Brad Daugherty and Rusty Wallace will handle the show from the Infield Pit Studio at 7:30PM.

ESPN2's day of NASCAR will conclude with the Nationwide Series race at 8PM. The full ESPN crew including Tim Brewer in the Tech Center will be along for this event.

SPEED will counter ESPN2's Nationwide Series race with six back-to-back episodes of Wrecked beginning at 8PM. Then, Trackside with Steve Byrnes, Larry McReynolds, Jeff Hammond and Elliott Sadler will be along at 11PM. This week's guests will be David Reutimann and Greg Biffle.

After the last three weeks of SPEED's coverage, ESPN will be stepping into what has not been the best situation for them. Since ESPN has only one announce team, by the time that the Nationwide race rolls around at 8PM Punch and company will already have done six hours of coverage. Perhaps not the best situation to then step into a fast-paced live Nationwide Series race on national TV.

This post will serve to host your comments about ESPN2's Friday coverage right up until the Nationwide Series telecast at 7:30PM. There will be a new post up for in-progress race comments.

To add your TV-related opinion, just click on the COMMENTS button below and follow the easy instructions. The rules for posting are located on the right side of the main page. Thanks for taking the time to stop by.
Posted by Daly Planet Editor at 9:00 PM 108 comments: 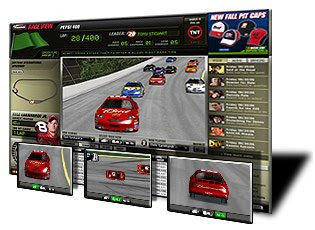 NASCAR TV has come a long way since the early days of Ken Squier and the Daytona 500 on CBS being mixed with taped highlights on ABC's Wide World of Sports.

Now, a multi-billion dollar TV contract brings three TV networks to the coverage of all the Sprint Cup Series races each season. But, that is not the only way to watch the action. Most fans know about the Hot Pass service that is available to DirecTV users, by only 17 of the 80 million TV homes in the US have DirectTV.

A viable solution for several seasons has been located on the Internet. Turner Sports Interactive pays NASCAR a lot of money to operate the NASCAR.com website. This group recently was given the NBA.com website by that organization and is one of the premier groups at pushing the website technology envelope.

Over the years, the video element of NASCAR.com has developed slowly but surely. This application works just like watching a video on YouTube. A fan goes to NASCAR.com, clicks on the video link and watches any of a host of recorded videos or live broadcasts. As with many things in life, to get the really good stuff requires parting with a little cash.

This weekend in Richmond, fans can see all the features of the high-end live video feed when NASCAR.com's Sprint RaceView is offered completely free for the Sprint Cup Series race. Click here to go directly to the page for the free service.

Earlier this season, TNT offered a similar broadband Internet application and called it RaceBuddy. It turned out to be a smashing success for one reason. It was free. The vast majority of NASCAR fans are already paying a hefty cable TV bill, so RaceBuddy worked to put TV viewers in the position of also watching the computer screen at the same time. There were lots of new first-time "NASCAR multi-taskers" this summer.

That is the concept that RaceView subscribers know all too well. RaceView has all kinds of gizmo's and gadgets, but the best is the driver audio selections and the ability to change camera angles. I have to admit that having the ability to pause and rewind just like a DVR or TiVo is also kind of cool.

While I have seen the demo, I have never subscribed to RaceView so I will also be sampling it for the first time this weekend. The folks at Turner tell me that even if the race is delayed to Sunday or even Monday, they will stick around and provide the entire event for free.

Reading the NASCAR.com website, the company is also offering a low price for all The Chase races to anyone who likes what they see this weekend and signs-up for 2009.

With many computer towers and laptops now being able to plug directly into HDTV sets, this weekend also may be an opportunity for some more adventurous types to see what RaceView looks like on a big HDTV screen. I look forward to hearing from those folks.

Before anyone goes off on a tangent, let's make one thing clear. There is no doubt that the front page of the NASCAR.com website is a mess. We know it, the fans know it and the Turner folks know it. It is one page on the Internet trying very hard to serve far too many masters. That will be a topic for another time.

I would suggest that fans can look for a major re-vamp of NASCAR.com with new technology and applications before Daytona in 2009. But for right now, please take a moment and let us know if you are going to sample RaceView this weekend.

The Daly Planet welcomes comments from readers. Simply click on the COMMENTS button below and follow the easy instructions. The rules for posting are located on the right side of the main page. Thanks for taking the time to stop by.
Posted by Daly Planet Editor at 8:00 PM 24 comments: