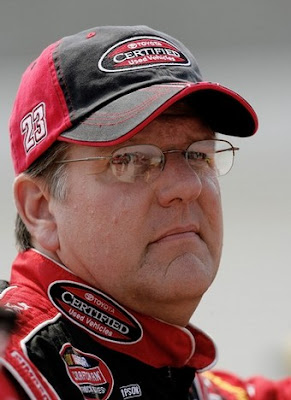 NASCAR returns to its roots this weekend with a doubleheader at Martinsville Speedway. While the well-known Sprint Cup stars will handle the Sunday duties, it is often the Craftsman Truck Series race on Saturday that has the most action.

Over the years, Johnny Benson has been a fan favorite for his personality and driving ability. This season, he comes into Martinsville locked in a battle for the Craftsman Truck Series championship once again. Unfortunately, reality has come knocking right in the middle of his outstanding season.

Benson's primary sponsor, Toyota Certified Used Vehicles, is suddenly gone. On Saturday Benson will be starting the race in his Bill Davis Racing Toyota painted simply black and red. During SPEED's Friday rain delay coverage, there was a lot of tiptoeing around this topic.

The fact is that for the first time in a very long time, the Saturday race winner at Martinsville may have no sponsor to thank. There will be no hat to wear, no CEO to acknowledge and no "TV time" for Joyce Julius to count. If Benson makes it to victory lane his truck would certainly be a statement about how tough the economic climate is for racing.

How SPEED chooses to handle this overall topic will help to determine just how honest the TV network will be as this series struggles through the remainder of the season. Some fans have been upset at ESPN2 deliberately hiding the "start and park" cars in the Nationwide Series coverage.

This Craftsman Truck Series issue is huge. SPEED is the exclusive TV network of the NCTS. What happens to this series next year and just how many teams can even finish this season has been something not discussed in the mainstream media. The focus this time of the year is on the Sprint Cup Series and The Chase. Saturday, a part of it should be on a 45 year old from Grand Rapids, Michigan.

Benson means a whole lot to a big chunk of NASCAR fans. His age and experience relates to the real NASCAR fan base much better than Kyle Busch or Joey Logano. From his Midwestern roots to his long-time TV appearances on Monday nights, Benson being dropped by his primary sponsor as he battles for the series championship is news.

On Saturday at 2:30PM, it will be Krista Voda leading The Set-Up on SPEED. This thirty minute pre-race show usually touches all the bases where series news is concerned. In the Craftsman Truck Series, Benson is definitely one of the bases.

Rick Allen, Phil Parsons and Michael Waltrip will be along to call the race at 3PM. This trio is very race-oriented, as SPEED does not have any daily or weekly NASCAR show that regularly features the trucks. Perhaps, Waltrip and Parsons might chime-in on what is going-on behind the scenes and just how tough things are for the NCTS teams.

In light of the Benson situation, it seems ironic that 40 trucks are on-hand to try and qualify for this event. From struggling drivers like Sam Hornish and Chad McCumbee to "one timers" like Hermie Sadler and Mike Skinner's son Dustin, the race should prove to be a wonderful mix of personalities and experience.

So, one key element to watch on Saturday will be whether SPEED tackles the Benson issue head-on or chooses to run and hide. It should also be interesting to see how Sunday night's NASCAR TV line-up on SPEED deals with the overall subject.

Sooner or later, even Dave Despain may break from Wind Tunnel's open-wheel devotion and try to figure out just what NASCAR may be putting on the track in 2009.

The Daly Planet welcomes comments from readers. Just click on the COMMENTS button below and add your opinion. The rules for posting are located on the right side of the main page. Thank you for taking the time to stop by and voice your views.
Posted by Daly Planet Editor at 9:17 PM 62 comments: 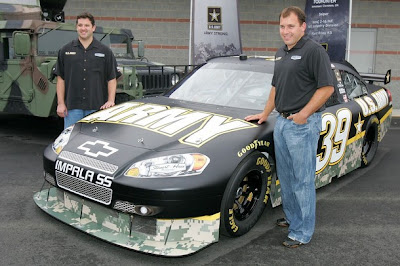 What a jam-packed Friday of NASCAR on both ESPN2 and SPEED. The action begins in the morning with trucks on the track in Martinsville and the day winds-up with Tony Stewart and Ryan Newman appearing together to talk about the 2009 season.

It will be the familiar voice of Rick Allen that welcomes SPEED viewers at 11AM Eastern Time for Craftsman Truck Series practice. Joining Allen will be Phil Parsons with a possible appearance by Michael Waltrip. Down on pit road will be the usual cast of Ray Dunlap and Adam Alexander.

After an hour of the trucks, ESPN2 is next with Sprint Cup Series practice at Noon. Dr. Jerry Punch, Dale Jarrett and Andy Petree will be looking out the window of the Infield Pit Studio as the teams use this time to dial-in their cars for both qualifying and the race.

The Craftsman Trucks return on SPEED at 1:30PM for final practice. Allen and Parsons are going to be dealing with some good stories from the morning session. There are a lot of "one timers" on the 40 truck entry list for the Martinsville race. They include SPEED's own Hermie Sadler, Mike Skinner's son Dustin, Sam Hornish and Kyle Busch.

The big rumor is that fan favorite Johnny Benson has lost his team sponsorship starting this weekend even after a tremendous season of racing. How and why all this is going-on can probably be traced directly to the economy, but Benson will most certainly be asked about the issue. Bill and Gail Davis have apparently entered Benson on their own dime.

Punch and the ESPN2 gang return at 3:30PM for Sprint Cup Series qualifying. This is always an interesting affair at Martinsville and this week finds 45 cars trying to make the field. Among those to watch are Mike Bliss (#00), Sterling Marlin (#09), AJ Allmendinger (#10) and Ken Schrader (#96).

The pit road crew of Jamie Little, Shannon Spake, Mike Massaro and Dave Burns joins the ESPN2 coverage for qualifying. Tempers are a bit tight in the Cup garage and Martinsville is both a "payback track" and a fundamentally tough race to finish.

One big story will be the addition of Scott Speed to the field coming-off his ARCA disaster at Toledo. It should be interesting to see how ESPN deals with Speed after interviewing him on Wednesday's NASCAR Now.

After the on-track action from Martinsville is over, ESPN2 is up first at 5:30PM with a thirty minute version of NASCAR Now. Combining live reports from the track with highlights of the day, this should be a good wrap-up show for fans who are just coming home.

The evening ends a bit earlier than normal because of the Barrett-Jackson car auction that is on SPEED beginning at 7PM. The popular Trackside program is moving to 6PM for this week and it might be a good idea to record this one.

Host Steve Byrnes and his panelists Larry McReynolds, Jeff Hammond and Elliott Sadler have lined-up what could be a "big show." Tony Stewart will put on his Sprint Cup owner's hat and bring his driver Ryan Newman along as these two appear on the show to talk about the dynamic of rolling-out a new team in 2009.

With Stewart effectively out of the championship hunt and Newman not in The Chase, these two should be able to talk freely for perhaps the first time about their efforts toward next season and their goals for 2009. This panel always gets their guests very involved, so there just might be some memorable comments. Denny Hamlin will also appear on the show.

Our final tip for the weekend is that NASCAR.com is making Sprint Raceview free for the Sunday Cup race. Click here for the link to be taken to the Raceview page. This will be a good opportunity for fans who miss TNT's RaceBuddy to try out NASCAR's own Internet video offering. The complete TV weekend line-up is posted on the right side of the main page. Friday should be good for lots of stories by the time Trackside hits the air at 6PM.

The Daly Planet welcomes comments from readers. Simply click on the COMMENTS button below and follow the easy instructions. The rules for posting are located on the right side of the main page. Thanks for taking the time to stop by.
Posted by Daly Planet Editor at 4:30 AM 31 comments: