Getting Primed With Jimmy Spencer 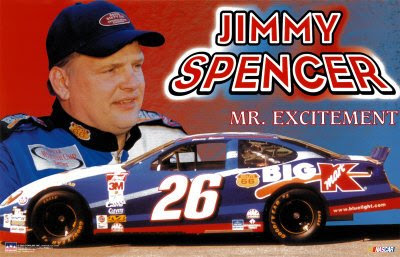 The TV evolution of Jimmy Spencer continues on SPEED with his recurring role on the Race Hub series. This Monday through Thursday show is only thirty minutes long, so it moves at a pretty quick pace.

The fundamental idea of Race Hub is to make use of SPEED's location just down the street from the Charlotte Motor Speedway. The studio is an easy drive for most of the NASCAR personalities. It has worked out well to regularly have drivers, owners, crew chiefs and NASCAR officials being interviewed in a casual setting.

In looking for other elements to add to the series, SPEED has tried and failed with quite a variety of ideas. Currently, Miss Sprint Cup is a regular guest along with Jeff Hammond and Larry McReynolds. More recently, Race Hub has given Jimmy Spencer a chance to carve out a new niche with his unique take on NASCAR topics.

The feature is called Getting Primed with Jimmy Spencer. This title is due primarily to the fact that SPEED has actually landed a commercial sponsor for Spencer's bit. KILZ is a company that sells, you guessed it, primer.

The TV network quietly moved Spencer off the high-profile RaceDay show this season and replaced him with Kyle Petty. Spencer gave up his post-race role on the Victory Lane show to Petty as well.

SPEED tried Spencer in a Monday night show that featured him sitting in the Spencer Auto Salvage Yard. The set was meant to resemble the Berwick, PA office of the actual Spencer family business. Of course, host Ray Dunlap never got around to mentioning that point. What's the Deal was a complete and total disaster. It was removed from the TV schedule. Shows on SPEED are never officially cancelled.

Spencer has a well-defined character. Since TV producers know what they are getting, the real issue is building something that works for the viewers. Race Hub came along at the perfect time and has given Spencer new life. Unfortunately, some of the same bugs that existed in his now defunct TV series are still present.

Instead of being welcomed to the Race Hub studio like all the other guests, Spencer continues to appear from the old What's the Deal set. He also still wears his salvage yard work shirt, which features a "Mr. E" name tag. Once again on Tuesday, Spencer's appearance and surroundings were never explained.

Getting Primed features Spencer interacting with the Race Hub host. You could not have picked a more opposite character than the neatly attired and politically correct Rick Allen. In the Tuesday bit, Allen tossed scripted questions to Spencer and then pretended to enjoy the answers. Pretended is the keyword there.

Here are some Spencer tidbits from Tuesday:

To Scott Speed's about his on and off-track comments on the MIS contact with Casey Mears: "You know why I think you are so upset about this? Because the first two times Casey got in that car he kicked your butt."

On Jeremy Clements driving the Boudreaux's Butt Paste Chevy: "He was hauling ass baby, in that old buttmobile. He got to the top ten during the (Nationwide Series) race. For a family-owned team, I love it!"

To Kyle Busch on truck series frustration comments at MIS: "I am one of your biggest fans, what you do on the racetrack is amazing stuff. But when you get out of your truck and take a little dig at this guy (Almirola) who is driving your old truck...I used to be a sore loser, Kyle. I got some lessons. You know what? Give me a call, buddy."

Spencer is working items into his commentary like the crying towel for whining drivers and the victory cigar for positive performances on the track. Instead of recording his bit alone and then providing a email or Twitter link for fan comments, Spencer painfully interacts with the show host and then just disappears.

While Race Hub has Miss Sprint read some selected driver tweets, it's very clear that SPEED just does not get social media. With almost all the network's personalities using Twitter and Facebook regularly, you can click here to view Race Hub's Facebook page which has no feedback for Spencer at all.

A series like Race Hub needs characters. In the current politically correct atmosphere of NASCAR, Spencer is clearly a personality that can drive fan feedback and get the ball rolling on a lot of topics. Bringing fans into the conversation can perhaps finally get Spencer primed for a TV comeback and SPEED in the social media mix. It just might be Spencer's last chance.

The Daly Planet welcomes your comments on this topic. To add your opinion, just click on the comments button below. This is a family-friendly website, please keep that in mind when posting. Thanks for taking the time to stop by.
Posted by Daly Planet Editor at 1:00 AM 15 comments: