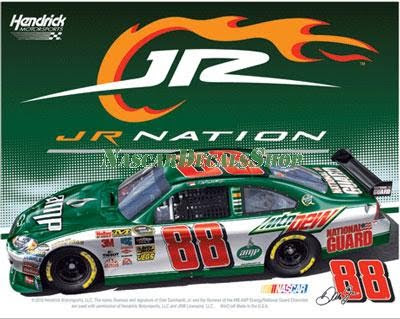 Here we go with the official "big one" TV coverage. These were the buzzwords repeated endlessly by Dr. Jerry Punch when he was in the play-by-play role for three years at ESPN.

The pre-race show from Talladega will be on ESPN2. Allen Bestwick is hosting from the Infield Pit Studio with Rusty Wallace, Ray Evernham and Brad Daugherty. It should be interesting to see if they use this hour to acknowledge the controversial finish of the truck series race and discuss the danger the yellow line rule poses today with cars now running 200mph once again.

Marty Reid is going to call the race. This might be his biggest challenge yet as he makes his way through the ESPN Sprint Cup Series races for the first time. Reid is going to have to balance the action on the track with the pictures that ESPN chooses to show.

Time and time again since the Chase began, Reid has been caught working only off the monitors in the TV booth. Incidents and key passes on the track have often been acknowledged by Dale Jarrett and then caught after a delay by the ESPN TV truck.

Jarrett and Andy Petree are going to be front and center at a track where NASCAR looks very closely at what the TV personalities say on the air about the racing. Teams dropping to the back, accidents getting to pit road and last lap incidents have been hot buttons for the sanctioning body.

On pit road will be Punch, Jamie Little, Vince Welch and Dave Burns. This is the race where tempers overflow like no other. Short-track beating and banging pales in comparison to the high-speed danger of this superspeedway. It should be interesting to see the pit reporters interact with drivers out of the race and after the event is over. Tim Brewer will be in the Tech Garage.

SPEED televised the truck series race on Saturday and it was a pleasure to watch. Overhead shots and wide angles let viewers see the racing through the pack as it played-out. Pit road reporters updated the key teams and the pit stops in detail.

This race has potential to boost NASCAR TV ratings for the rest of the season. A compelling and exciting telecast will go a long way toward erasing some of the blunders from ESPN this season, including the poor coverage at Martinsville.

This post will serve to host your comments on the ESPN2/ESPN coverage of the Sprint Cup Series race from Talladega. To add your TV-related opinion, just click on the comments button below. This is a family-friendly website, please keep that in mind when posting. Thanks for stopping by.