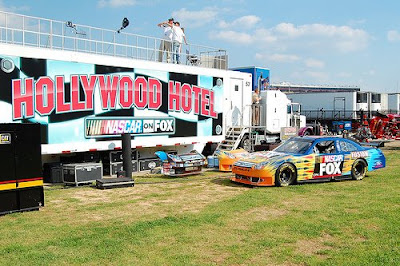 The last we heard, both Fox and ESPN were huddling with the bean counters and looking at the NASCAR TV production budgets. TDP talked (click here) about the fact that some adjustments were going to be made before the 2009 season got underway.

This week starts the official countdown to Daytona 2009 and it should be very interesting to see if the Hollywood Hotel, the ESPN Infield Pit Studio and the ESPN Tech Center all roll into the speedway with the rest of the TV gear.

Since the article talking about the potential cutbacks, there has not been a peep from either ESPN or Fox in that regard. Both networks are neck-deep in other sports at the moment and there is apparently little time to talk about NASCAR issues.

All this speculation began when Fox dropped the on-location pre-game show for the network's Major League Baseball Game of the Week. This put former NASCAR reporter Jeanne Zelasko on the sidelines. She has recently begun (click here) a campaign to have herself named the play-by-play announcer on the LA Dodgers baseball broadcasts. Thanks to a TDP reader for the correction.

If Fox will drop the on-site pre-game for baseball, will there be a change in the status of the Hollywood Hotel for 2009? This custom-built mobile production studio is the second version of this concept and did not start-off to (click here) rave reviews.

While the old version had a real window as a backdrop, the new model essentially cuts-out the outside world and exists as a closed studio. Pictures of the racetrack behind Chris Myers are actually inserted electronically.

It may well be that Fox decides the Hollywood Hotel is worth the cost this season because the network is telecasting Sprint Cup Series races. That moves us over to ESPN, a network that does not touch a Cup race until the Brickyard 400 in late summer. ESPN handles the final seventeen Sprint Cup Series events.

At Daytona and then long into the season, ESPN will only be telecasting the Nationwide Series races. The last two seasons have seen ESPN bring the Infield Pit Studio and Tim Brewer's Tech Center to both the Nationwide and Sprint Cup Series weekends right from the start.

Perhaps, ESPN might be considering saving some dollars and reducing the level of TV production elements on the Nationwide Series races. They could always return the Tech Center and the Infield Studio in July when the Cup coverage begins.

As fans may remember, ESPN also has an infield studio crew that appears only on the Nationwide races all the way up to July. Allen Bestwick, Rusty Wallace, Brad Daugherty and sometimes Ray Evernham were on-hand to cover the Nationwide companion races on Cup weekends.

Originally, this approach of using ESPN's full Sprint Cup crew to handle the Nationwide Series races was considered good practice time. Now, after two seasons the practice is over. ESPN has indicated they want to come out of the box lean-and-mean with the economy drastically slowing down the TV advertising dollars in NASCAR telecasts.

We should be learning shortly what NASCAR TV elements will continue to travel for Fox and ESPN as they begin the year in Daytona. Whether those decisions affect the on-air announcers will only be known when those two networks issue their first NASCAR press release of the season. TDP will keep you updated.

The Daly Planet welcomes comments from readers. Just click on the COMMENTS button below and follow the easy instructions. The rules for posting are located on the right side of the main page. Thanks for taking the time to stop by.
Posted by Daly Planet Editor at 9:00 AM 27 comments: