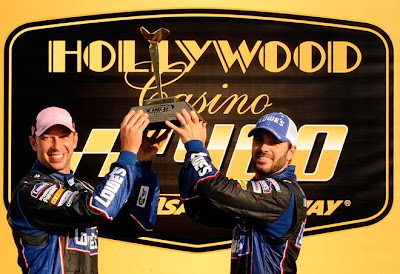 Update: ESPN got a 2.3 overnight TV rating according to our friends at the Sports Business Journal. That is the same as the fourth race in the 2010 chase held in Fontana, CA. That will probably dip NASCAR below 4 million viewers when final ratings come out on Tuesday afternoon.

Update #2: Final TV rating grew to 3.1 cable households, allowing the total viewer number to top 4 million total. That is pretty stout up against the NFL.

We are getting some very interesting and thoughtful comments from readers, so this will continue as the lead story. I hope you will add your opinion to the conversation as well. Thanks.

Once again ESPN faced up to another race that centered around fuel mileage and little passing. Pit stops and race strategy were at a premium from start to finish.

Nicole Briscoe hosted a pre-race show that included one Sprint Cup Series driver in the Infield Pit Studio. If there was any doubt that Carl Edwards is going to be joining the NASCAR on ESPN telecast team in 2012, it should have been erased by that appearance.

Rusty Wallace and Brad Daugherty are often times more amusing than informative these days. Brad is the cheerleader and Rusty tries his best to address issues in the sport selected for him well in advance. Wallace and Daugherty did not look very happy that Carl Edwards was once again invading their territory.

Allen Bestwick knew early on this was going to be a race of survival. He changed from calling the laps to leading discussions on various topics and working the pit reporters and Tim Brewer on issues. There was little racing except on restarts and no accidents. It had that familiar smell.

After a Nationwide Series telecast that featured all kinds of changes, the Cup telecast stayed true to the script. Tight shots from the start and coverage that jumped from one car to another made it tough to watch. "Hyper-tight" is apparently here to stay.

Kudos to the pit reporters who have worked very hard in the last two races climbing up to talk with the crew chiefs as the race is going on. That is the perspective that is needed with this type of racing. Learning why decisions were made is super.

Petree was on his game and his analysis has been sharper this season than ever before. He has been with ESPN from the start and is a veteran of all these changes. Jarrett worked well, but Petree continues to set the pace in the TV booth.

A late caution allowed for some drama and a final dash to the finish. A Jimmie Johnson win sets-up some good stories for the media this week. A ten minute post-race left time for a solid set of interviews. ESPN left the air on time.

This post will serve to host your opinion of the ESPN coverage of the Sprint Cup Series race from Kansas Speedway. To add your comment, just click on the comments button below. Thanks for stopping by.