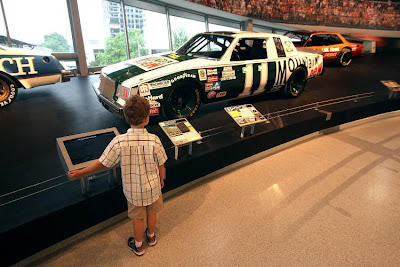 At 8PM Tuesday night the front page of the NASCAR.com website did not contain any mention of the Hall of Fame selection that would happen on Wednesday.

There were no stories, no pictures and not even a TV listing of the live programs on SPEED that would discuss and then announce the new inductees. The lead story at NASCAR.com was about the friendship between driver Carl Edwards and country singer Justin Moore.

NASCAR's Facebook page, liked by almost three million users, also had nothing about the Hall of Fame. No mention of who was on the candidate list, how the process worked or who was on the committee involved in making the selections. No fans were debating, no comments were being left.

Shortly after 8PM, NASCAR's official Twitter account posted one tweet about the Hall of Fame activity on Wednesday. That was the only tweet of the day referencing the selection process. It contained no links to pictures, information or videos. It just said if you are in town, the Hall is open for business.

Since there was no link to the Hall of Fame website on the front page of NASCAR.com, I typed in the address and went to the digital home of the Hall. Promoted on Wednesday was a pre-vote tour of the actual voting room. It was for those fans who had paid $50 to become members of the Hall of Fame.

Hashtags on Twitter have been all the rage. They allow users to quickly access information on a specific event. There was no promotion of the #NASCARHOF hashtag to be seen in advance of Wednesday on the NASCAR or NASCAR Hall twitter accounts.

Live tweeting events to create a central hub for content and get information out to fans and media is key in this social media oriented world. There was no mention of NASCAR live tweeting the activity Wednesday as the committee assembles, debates and then votes.

NASCAR's PR department says this vote is wide open. The candidates come from different eras and there are going to have to be some persuasive speeches by those voting in support of their choices. There are great storylines emerging in the debate between honoring the candidates from the past and celebrating those who ushered in the modern era. The day's activity should make news across the sport.

Click here for a link to the SPEED TV website page about the Wednesday Hall of Fame activity and coverage. SPEED is the official TV network of the Hall of Fame, but is not owned by or affiliated with NASCAR.

There has to be a more cohesive way to rally the various NASCAR-owned digital resources in support of the Hall on days like this. While SPEED will provide some TV exposure and Sirius Speedway will originate a satellite radio broadcast, the missing piece of the puzzle belongs to NASCAR itself.

Between the NASCAR website and various social media accounts, Wednesday should be used to generate as much fan involvement and media coverage as possible. Live webcams from the Hall, Facebook updates on the progress of the day and a promoted Twitter hashtag with live tweets would bring a new level of exposure to the struggling facility.

We invite your comments on this topic. Thank you for taking the time to stop by.
Posted by Daly Planet Editor at 5:00 AM 24 comments: