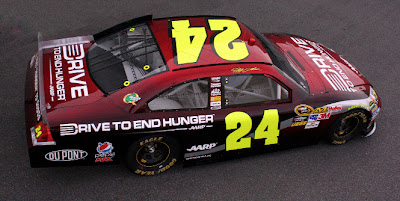 It was not the day that contenders like Jeff Gordon, Mark Martin or Joey Logano had in mind. Instead of a total fuel mileage race as we have seen in the past, Sunday's race contained an interesting mix of stories from start to finish.

Nicole Briscoe worked hard with her trio of Rusty Wallace, Brad Daugherty and Ray Evernham to create some interesting pre-race content. Rusty called out Jeff Gordon, Daugherty tried to explain his car oiling down Watkins Glen and Evernham once again stood head and shoulders above them both. It was muted, but had potential.

During the race, NASCAR Now Lead Reporter Marty Smith appeared on-camera to toss-up a topic for discussion that originated from a viewer tweet. It was a twist that perhaps tipped off the fact that ESPN is moving toward an interactive environment to solve the issue of fans feeling left out of the coverage.

Allen Bestwick was joined by Dale Jarrett and Andy Petree to call the race. Petree has emerged as the dominant analyst as Jarrett has simply faded into the background. Bestwick is the master of keeping things in order and has eliminated any confusion during the races that happened with both Jerry Punch and Marty Reid in that role.

The pit reporters were again solid, with Jerry Punch handling some key interviews with his normal style and grace. Having a senior person among the pit road team makes a lot of difference. As ESPN heads into the Chase, Punch is going to have a key role with interviews of the top contenders.

ESPN was outstanding in using a split-screen for green flag pitstops. The network replayed the incidents that were missed and seemed to give up the scripted approach and just covered the race for the final 50% of the telecast. The problem continues to be the tendency to zoom-in when any race fan wants TV to zoom-out and let the racing be seen.

The ticker continues to be the source of information for fans of drivers not in the top ten. This has to change. Field recaps can be done in minutes and there are plenty of minutes available where the network currently follows the leader. Each driver in the race has fans and they should all be respected.

The late drama of Jimmie Johnson's motor failure left the network in position for an exciting finish and Bestwick got the most he could out of the final three laps. The director allowed viewers to see some of the lead lap cars cross the finish, but it could have been so much better. In the end, NASCAR got some great storylines to build on as the sport heads for the Chase.

We invite your opinion on the ESPN coverage of the Sprint Cup Series race from Michigan. Comments may be moderated prior to posting.
Posted by Daly Planet Editor at 9:00 AM 40 comments: