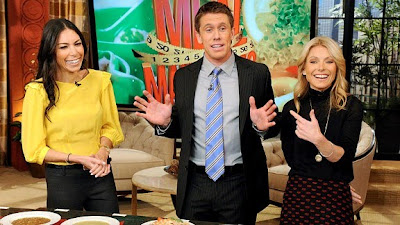 As we move closer to the actual start of the season, the TV and media news is starting to heat up a bit. Here are some items from this week.

Bob Pockrass from Scenedaily.com said on Twitter that he recently talked to Carl Edwards and was told that Edwards has not yet made up his mind about working for ESPN on the Nationwide Series telecasts. I find that hard to believe, but there continues to be no comment from ESPN on the issue. Edwards recently confirmed he will not be driving in any Nationwide Series races in 2012.

A media favorite, Monica Palumbo, left her Miss Sprint Cup duties at the end of 2011. Sprint dropped a hint this week about who is replacing her. The hint was that the new Miss Sprint Cup team member had interviewed every 2011 X-Games gold medalist. Pretty good hint and I bet it starts some folks on a mission. Let me know if you think you have the answer.

Kind of a bombshell here. Apparently, Showtime is scaling back the Inside NASCAR show this season in a big way. As some of you might remember, this started out as a very expensive weekly hour show produced by the NASCAR Media Group from Charlotte, NC. It was cut to 30 minutes last year and now it is being slashed. I'm hearing only 11 episodes, one for the Daytona 500 and then none until the Chase begins. Still waiting for Showtime contacts to return emails to confirm.

Pete Pistone from SiriusXM radio mentioned earlier this week that he was told this season NASCAR on FOX will be using a side by side commercial format. This is a tough sell, as FOX is a broadcast network and has a totally different logistical method of running commercials. It is certainly possible for those truly national spots, but it cannot work for local station breaks. The FOX guys are working on a statement that should be coming Wednesday or Thursday on the topic.

Let's address some Hall of Fame issues. The actual dinner and induction ceremonies are going to take place on Friday night in Charlotte. The NASCAR Media Group is going to record the festivities and will edit the jacket ceremony, dinner and induction speeches into a show for SPEED that will air Sunday at 6PM ET.

The entire concept of the January induction was meant to hype Daytona and the start of the season. Instead, it happens at the height of the NFL mania currently engulfing American sports fans. There is no doubt that NMG will do a solid job, but there has to be a better way of handling this in the future.

I'm not a Barrett-Jackson fan, but this media release from Penske Racing got my attention:

"Tune into the Barrett-Jackson auction Thursday, January 19th at 8 pm ET on SPEED as NASCAR’s Roger Penske and Brad Keselowski along with Bruce Halle and Michael Zuieback from Discount Tire and members from Paralyzed Veterans of America will be in attendance to auction off the car Keselowski drove to his first win at Penske Racing. The auction of the 2010 No. 22 Discount Tire Dodge Charger, which won the Aaron’s 312 at Talladega Superspeedway, will benefit Paralyzed Veterans."

Stewart-Haas Racing sent along a note that Tony Stewart will appear on an episode of Last Man Standing with Tim Allen scheduled to air in February. Click here to see some behind the scenes pictures of the shoot. I am certain we will hear more about this over the next several weeks.

Ben Grossman at Broadcasting & Cable just interviewed NASCAR Chairman Brian France. While much of the conversation was things we have heard before, France did point a finger at ESPN and talk about future TV negotiations. Here are those two questions.

B&C: You say you’re pretty aggressive about what your TV partners need to do for NASCAR. What do you want from them?

France: We are always the sport that is under-covered given the ratings and size of the events. In particular, ESPN. They just have so many platforms. So we are pushing real hard with them to have a more integrated approach. We have hired people to service them better, so we can help them accomplish that. They have the most assets to be deployed; it doesn’t mean everyone else doesn’t have some big ones and good ones. We are going to work to make them a better partner.

B&C: Your TV deals are up in 2014, but when do your negotiating windows open with your current partners?

France: Not for a little while, but we are having conversations, because a lot of our partners have been clear they would prefer to renew. All things being equal, our first hope is that the incumbents do renew. . . I think [talks] could heat up at any time, that’s my sense. It’s not cold now, we are having conversations, my sense is things will happen sooner rather than later, and sooner than they normally would in a cycle of renewals.

This week marks five years since Benny Parsons was taken from us by lung cancer. Younger viewers may not have known this wonderful man, but veteran NASCAR fans certainly did. His knowledge about the sport and pleasant nature on the air helped to form an image of the sport that helped it to travel outside of the southeast and become truly national.

Former NBC and TNT announcer Bill Weber is a tremendous writer. He scripted a tribute to BP that aired during the TNT coverage. Click here to see it. You can also use the YouTube index to the right to locate other BP material, including the famous Buffet Benny segments on ESPN.

Please feel free to comment on the above topics. If any additional news rolls in, it will be posted right here. Thanks again for stopping by.