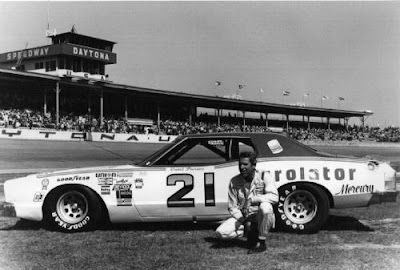 Nothing shows the disparity between the colorful NASCAR characters of the past and the polished spokesman of today then having those two groups together in the same place. Darlington Raceway served that purpose on Wednesday.

Nicole Manske has worked hard to maintain her polished and controlled style during her hosting duties for ESPN2's NASCAR Now. The program does a good job of setting things up in advance, so even the question and answer sessions are nothing more than a review of what has already been discussed earlier in pre-production meetings.

Leave it to NASCAR veteran David Pearson to throw a wrench in the best made plans of both NASCAR Now and the Darlington Raceway. The idea was to have Pearson drive his old #21 car around the newly-paved facility with Carl Edwards tailing behind in his COT.

This would give still photographers an opportunity to capture a unique shot and also give the upcoming Darlington race some publicity. Pearson's old ride was brought out of the museum and put in good enough shape to run a couple of laps at less than pace car speed. Edwards dutifully followed along.

By the end of the day, the publicity tour was almost done. Edwards and Pearson had one more duty, and that was appearing on NASCAR Now side-by-side. Some polite questions were asked by Manske, and the videotape of the two cars rolling around the racetrack was played. Everything was going well until David Pearson decided to start answering questions "old school" style.

Manske simply asked Pearson if he liked where NASCAR had gone in the past four decades? Pearson pointed at Edwards and said, "I don't...but he might." In the world of the polite and polished NASCAR drivers, things were about to get interesting.

"NASCAR ain't doing nothing I like right now," continued Pearson. "I don't like the rules they are doing...you can bump somebody and they want to fine you for it." Pearson saw the look on Carl Edwards face and made sure to say he knew that Edwards could not speak-up or he would get fined.

Manske asked Pearson what he thought of Edwards. "He's a lot nicer than I thought he was, if you want to know the truth," said Pearson. In the land of the politically correct, Pearson was wonderfully out of place.

Manske closed by asking Pearson about the current drivers. Pearson made a great point in saying, "they make a lot more money than we did, but they don't have time to spend it." Pearson's point was that in the old days, NASCAR drivers had a lot of "fun" in addition to the racing.

Pearson closed by saying NASCAR today was far too serious and had far too much politics in it. His open collared shirt and chewing gum was in sharp contrast to the perfect driver suit and physically fit appearance of Edwards. Nothing more needed to be said about "then" and "now."

Give Manske credit for hanging in there with Pearson, and continuing her questions. She once again proved that ESPN made a good choice in bringing her over from SPEED and giving her this additional responsibility.

As NASCAR Now continues to grow, perhaps getting a periodic perspective from a "old timer" would help to put some of the NASCAR stories of today in the type of "broader light" that is currently missing from the TV scene.

The Daly Planet welcomes comments from readers. Simply click on the COMMENTS button below and follow the easy instructions. The rules for posting are on the right side of the main page. Thanks again for stopping by.
Posted by Daly Planet Editor at 8:23 PM 45 comments: