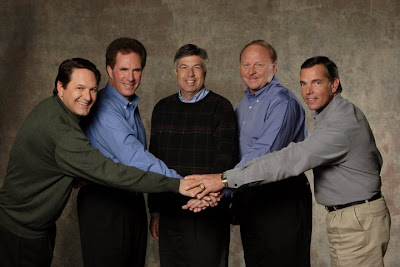 Something had to change. The recent NASCAR on Fox telecasts had been off-balance and buried under an endless string of sponsor mentions, features and commercials. It seemed that the announcers rarely had time to tell the story of the race.

Darlington changed all that. No matter how it happened, the results were exactly what the NASCAR on Fox team needed. A great night of covering NASCAR racing.

While Chris Myers did a mediocre job of presenting the pre-race show, Darrell Waltrip and Jeff Hammond negotiated their way around his goofy act and talked racing. As Waltrip left for the announce booth, Hammond asked him if he could take Myers along.

The news of Jeremy Mayfield was still being sorted-out and Fox chose to bypass the drug suspension issue for the most part. Luckily, this was a short pre-race show and the Mother's Day theme worked to get things over to the race start with a good feeling.

Once the green flag fell, Mike Joy left little doubt who was in charge. He called for cameras to shoot specific cars, he called out the accidents in a loud voice with the turn number and he set a tone that would last the entire night.

The effort of the on-air team was outstanding and let Waltrip and Larry McReynolds shine. The excitement that many of us fondly remember from this group had returned. Joy used his two booth analysts, his four pit road reporters and Jeff Hammond in the Hollywood Hotel like we had not seen this season since Daytona.

Fox changed the pit stop order and framed pit road in one video box while the featured cars appeared in another. Once the race off pit road came, a nice big graphic showed the order instantly as the cars left. What a far cry from the chaos of Phoenix earlier this season.

Many of the over-the-top sales features were gone in this race and the ones that remained were expertly placed in the program with limited interruption. Even the Digger issue was muted, with an occasional animation and promo mostly under caution.

It almost appeared as if the Fox team just decided to do things a little bit differently this weekend. Wideshots of pack racing and the nerve to jump back in the field to show the action differed from the admitted philosophy of following the leaders that often made fans crazy.

Graphics were used effectively in this race and often worked well to highlight the issues being experienced on the racetrack by the drivers. Gone were many of the intrusive sales-driven graphics that made no sense at all but paid the bills.

Joy was tremendously effective in following his mentor Ken Squier in driving the excitement up quickly when there was trouble on the track. Michael Waltrip's engine fire was a good example of how a good play-by-play announcer can shape a TV broadcast for the fans at home.

It is unfortunate that Fox diminishes the intensity of the broadcast by continuing to add-in pre-produced "bumpers" leading into commercial. These feature awkward drivers doing everything from playing the drums to trying to look like tough guys. Time to put these on the shelf for the rest of the season, fans pretty much know who the drivers are at this point.

That minor issue did not distract from the fact that the on-air team had found a new intensity that let Joy direct traffic, McReynolds provide the details and Waltrip offer his veteran observations. On this night, even Hammond was used effectively in his infield role. The race recaps and cutaway car actually worked.

Just like the old baseball announcers, the Fox team called-out their Producer and Director several times during the telecast. They joked about the issues in putting together the telecast and acknowledged for the TV viewers that a race broadcast is a cooperative effort.

Late in the race, the incident between Carl Edwards and Greg Biffle was handled effectively using the announcers upstairs and in the Hollywood Hotel. Under caution, Myers also got the additional commercial material out of the way and returned the telecast to Joy with nothing left to do but call the race.

The last 75 laps of this event reminded many of us why we like NASCAR racing on TV. Under the lights with compelling stories and a constantly changing group of leaders, the race came down to the wire with a popular winner.

Next week SPEED hosts the coverage of the All-Star race and all of the NASCAR on Fox announcers will be involved. What a nice way to walk into the halfway point of the season.

Thanks for taking time out of your day to stop by The Daly Planet.
Posted by Daly Planet Editor at 11:30 PM 38 comments: 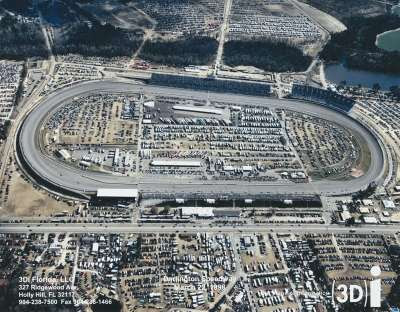 ATTENTION NASCAR TV VIEWERS: NASCAR on Fox coverage will begin on SPEED is you have a baseball game in-progress in your area.

The weather is hot, the track is slick and even the veterans had problems in practice and qualifying. It is Saturday night in Darlington, SC.

Chris Myers leads the NASCAR on Fox gang onto the air at 7PM from the Hollywood Hotel. He will be joined by Darrell Waltrip and Jeff Hammond for the pre-race show.

Update: Driver Jeremy Mayfield has been suspended for violating NASCAR's drug policy as a result of a random drug test that was done after the Richmond race. This should be a big topic on the pre-race show, but NASCAR does not disclose if this is a medication that is on the banned list or a recreational drug associated with illegal drug use.

It will be Mike Joy calling the action once the race coverage is underway. Again this week, Joy worked a very long Friday for SPEED that involved many live hours on the air covering practice and qualifying. Now, he faces the task of keeping the excitement level high on a track that has featured very little passing in the COT.

Fox has been struggling under the weight of a very heavy sponsorship load. It will be interesting on an action-packed track like Darlington to see how the frequent commercials and sponsor mentions affect the coverage. Digger will also have a presence, from the pre-race cartoon to the frequent commercial inserts.

This track makes great pictures with the Musco lighting and the low-level cameras really conveying the excitement of the sport and the speed of this track. In-cars are effective, but the action happens so quickly that the Director can easily get burned by lingering on the shot.

Tempers have been running a little short recently on the track, so this is really a potential cocktail for trouble between drivers. Scott Speed did not qualify, so his sponsor put him in the Joe Nemechek machine for an undisclosed amount of cash. This week, the Nemechek car will certainly have enough tires to get beyond he first gas run.

This post will serve to host your comments about the Sprint Cup Series race from Darlington on Fox. To add your TV-related opinion, just click on the comments button below. This is a family-friendly website, please keep that in mind when posting.

Thanks for taking the time to stop by The Daly Planet.
Posted by Daly Planet Editor at 5:21 PM 500 comments: 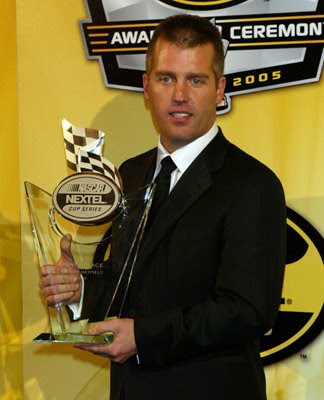 Dish Network has added SPEED HD to the channel line-up at last. Still waiting for Comcast to do the same in my South Florida area. Congrats to you Dish folks!

Jeff Hammond and Hermie Sadler have the duty of filling-in on NASCAR Smarts. Kyle Petty is hosting his annual charity motorcycle ride and Rutledge Wood is one of the riders. You can get exclusive pictures on Twitter at @kylepetty or online at kylepettycharityride.com anytime.

Still no word from SPEED as to what is going on with Kenny Schrader. He keeps popping up on both The SPEED Report and Wind Tunnel as a network "analyst." No clue about Schrader's possible return to the Monday night panelist chair.

For those of you asking how the Fox Sports CEO David Hill did in his online chat session, you can see it by clicking here. It is an easy read. Please tell us your reactions to his answers. Thanks to Mr. Hill for not laughing when TDP was mentioned!

Rusty Wallace did a good job keeping the energy high and letting Andy Petree express his thoughts as they both called the Nationwide Series race from Darlington on ESPN2. It certainly is tough for Rusty sometimes to have his son frequently in the middle of the very action he has to describe.

TDP will be live blogging the Cup race on Saturday night, please join us. To add your comments on the topics mentioned in this post, just click the comments button below. This is a family-friendly website, please keep that in mind when posting.

Thanks, have a great Saturday everyone!
Posted by Daly Planet Editor at 10:55 AM 120 comments: