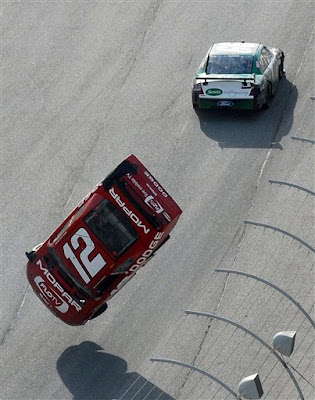 Early in the NASCAR on FOX telecast from Atlanta, Carl Edwards appeared on camera. After contact with Brad Keselowski, Edwards was clearly upset. The FOX team then showed Edwards a replay of the incident. Edwards admitted the video showed something different than he had first believed. Perhaps, he was also at fault.

"It looked like it wasn't as malicious as I thought," said Edwards. Television had apparently played a key role in straightening out a problem before it got worse. Unfortunately, nothing could have been further from the truth.

The NASCAR on FOX team did not report that Edwards had returned to the track to hunt Keselowski. They never showed Edwards as he chased Keselowski and repeatedly tried to spin him out. Instead, TV viewers saw the crumpled red car and then learned of the grim details through video replays.

Edwards was parked and Keselowski was alive. Edwards made his statement to pit reporter Dick Berggren who simply asked if he did it on purpose. The answer was a complete contradiction to the comments Edwards made earlier after being shown the first replay. Berggren never followed-up.

Brad Keselowski spoke carefully to pit reporter Krista Voda after being released from the Infield Care Center. He looked and sounded a lot more like a level-headed veteran driver than a hot-headed rookie with issues. He also said that Edwards had turned down on him earlier and told Voda that policing the sport was up to NASCAR.

After the race, Edwards did not appear on SportsCenter, SPEED's Victory Lane or NASCAR radio. He took his carefully crafted message directly to his fan base. Edwards ran to his Facebook page and posted the following message:

My options: Considering that Brad wrecks me with no regard for anyones safety or hard work, should I: A-Keep letting him wreck me? B-Confront him after the race? C-Wait til Bristol and collect other cars? or D-Take care of it now? I want to be clear that I was surprised at his flight and very relieved when he walked away. Every person has to decide what code they want to live by and hopefully this explains mine.

Edwards has almost 70 thousand fans registered on his Facebook fan page. Click here for the direct link. What better crowd to address than those who are already fans?

By Monday night, Edwards was heading for 6 thousand comments on his post. Most of the comments addressed Edwards personally, assuming that he was going to read them. As with any fanbase, they were generally supportive with words like payback and punk used a lot. Any way you slice it, Edwards had taken a stand and brought his post-accident message directly to his own fans.

All eyes are now on NASCAR, as Tuesday is normally the day that the sanctioning body announces penalties and generally clears the air from the previous weekend. In the past, NASCAR has issued statements and distributed through their Internet media site the specifics of penalties. This week will bring a change.

Beginning this week and continuing every Tuesday after a Sprint Cup Series race weekend, a NASCAR representative will appear on SPEED's Race Hub program. Perhaps, NASCAR is finally understanding that getting the message out in today's media environment means more than just a press release.

Race Hub is a Monday through Thursday show at 7:30PM that generally works to promote the sport with some interviews and opinions mixed-in. Both FOX and SPEED analysts appear on the show to address various topics, but the show is generally focused on having a variety of NASCAR personalities as studio guests.

Slowly, Race Hub has begun to add regular weekly features. Having a personality like Robin Pemberton, John Darby or Mike Helton in the studio will certainly help sort-out the issues from the weekend. Having one of them appear every Tuesday will do a lot more than that for both Race Hub and SPEED.

We will use this post for your comments on the Race Hub Series in general and the addition of a NASCAR visit on Tuesdays. To add your opinion, just click on the comments button below. This is a family-friendly website, please keep that in mind when posting. Thanks for taking the time to stop by The Daly Planet.
Posted by Daly Planet Editor at 7:00 AM 75 comments: