The Boo Heard Around The World 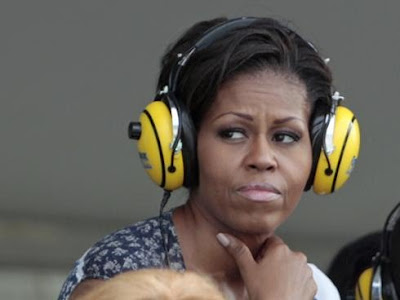 To some folks in the news business, it did not matter that Tony Stewart and Carl Edwards put on a great show. The tension of the final laps, the tight points race and the great sports TV pictures were pushed aside.

Many mainstream media members, online news sites and international publishers had struck gold long before the first lap was in the books.

It was supposed to be a quick stop for First Lady Michelle Obama and Dr. Jill Biden in Homestead on Sunday. Just a visit with the families of military service members who had been invited to the track for the final race. Obama and Biden would then join in with some of the children at the gathering to give the starting command.

The appearance was part of the "Joining Forces" program that encourages Americans to support military families going through the hardship of having loved ones on deployment. There were five thousand active and retired military and their families at the race. It certainly seemed like a good idea.

Click here and take your pick of sources to see the NASCAR fans in the grandstands boo Obama when she was introduced with the children to give the starting command.

This blog is not about politics, political parties or debating freedom of speech. Save your comments on those topics. We watch the media happenings in and around NASCAR.

What we are discussing is the viral spread of less than one minute of NASCAR-themed video around the world. Instead of a smiling and happy Tony Stewart, many media outlets chose the Obama booing video to distribute.

At first, this might seem harmless to the sport. It's just a video snippet of some folks choosing to express themselves on one topic when actually another is the one being celebrated.

But in today's world, the media can't help but add-on to the story. Since Obama did nothing but stand there, guess who took the hit for this one? That's right, it was the NASCAR fans and the sport.

The New York Daily News: "NASCAR fans revved up the boos for Michelle Obama and Jill Biden at the car-racing league’s season-ending event in Florida."

Sydney Morning Herald (Australia): "Further signs of the polarisation of American politics was evident at the Homestead-Miami Speedway on Sunday when the First Lady and vice-president's wife were booed by the crowd at the NASCAR season finale."

The Guardian (England): "NASCAR is a good old southern sport dreamed up in Florida in the 1930's. It's a sport whose viewing audience is almost entirely made up of white Southerners and the soundtrack is country music and hard rock."

Los Angeles Times: "NASCAR officials downplayed reports that Michelle Obama faced a hostile reception at the Sprint Cup finale in Florida on Sunday, despite the sounds of booing heard during the live television broadcast."

In today's world of specialized new media interests, there were plenty of personalities who took it upon themselves to interject.

Rush Limbaugh (Syndicated Radio): "The NASCAR crowd doesn’t quite understand why when the husband and the wife are going to the same place, the First Lady has to take her own Boeing 757 with family and kids and hangers-on four hours earlier than her husband, who will be on his 747. NASCAR people understand that’s a little bit of a waste. They understand it’s a little bit of uppity-ism.”

Jay Busbee (Yahoo! Sports): "This is not about politics. This is not about free speech. This is about being enough of an American, whoever you are, to recognize that we should hold ourselves to some higher standards in our public life. You just harmed the image of NASCAR worse than anything that Obama ever could have done."

Terrance Harris (BET): "NASCAR has for years claimed it gets a bad rap as a conservative hillbilly outfit where the Confederate flag flies as a symbol of racial divide. And then those who support NASCAR go out and prove those who believe as much right."

This is just the tip of the iceberg on this topic. Basically, what we have here is a wonderful example of just how an unintended media event overshadowed what many of us consider to be a historic one. I live about 2 hours north of the Homestead-Miami Speedway. Our local TV news featured the booing video, but none of the stations showed even a moment of race footage on Monday.

Speaking of Monday, the Obama's hosted a night of country music at the White House that included Dierks Bentley and Allison Kraus. Perhaps used to just this kind of media issue, it seems the first couple have moved on. The performances were recorded and will be aired Wednesday night on PBS and later this week on American Forces Network for military personnel.

What's left behind after this mess is more work for NASCAR's new Integrated Marketing Communications team (IMC) to get out there and make some noise about this championship outside of the motorsports media. The IMC gang has a little over two months to turn the actions on the track into public relations gold off of it.

In a sport splintered by four TV networks with different agendas, the official NASCAR website in disarray and a shrinking media corps, the task of erasing the perception that drunken rednecks booed a black First Lady standing with the children of soliders might take a little bit of work.

It should be interesting to see in 2012 just how many politicians are involved in NASCAR pre-race activities and who is asked to be the Grand Marshal of the upcoming Daytona 500. What a fascinating 24 hours in media land.

We invite your comments on how the media used this story and where you saw it. Please avoid political comments, this is a media blog and we are just watching the ongoing NASCAR media happenings. Comments may be moderated prior to posting. Thanks for stopping by The Daly Planet.