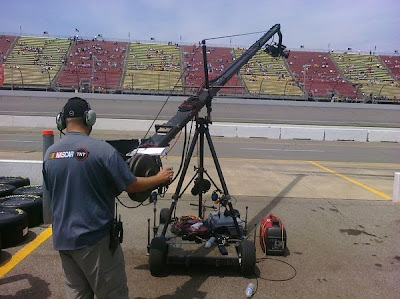 The second race of the six-event summer TV package from TNT originates from the Michigan International Speedway.

Lindsay Czarniak will host the Countdown to Green pre-race show. Kyle Petty and Larry McReynolds will be alongside. There is a lot to talk about this week.

Adam Alexander will call the race with Petty and Wally Dallenbach Jr. in the TV booth. Phil Parsons, Ralph Sheheen, Matt Yocum and Marty Snider are the pit reporters.

TNT's debut was a baptism by fire with rain stopping the race on the pace laps in Pocono. Czarniak filled time with McReynolds from an indoor studio using interviews and pre-recorded features. The weather in Michigan could also include some rain.

Alexander's debut featured a lot of accurate information, but little excitement. His even-tempered personality that served him quite well as a pit reporter did not translate into calling the racing action in the classic style. Perhaps he was playing it safe and we might see some additional play-by-play from him today.

Michigan is a wide and often boring track. Several races have been run without any caution periods. This is not the type of track where NASCAR may be inclined to look for a "debris" caution to better the show. This is also not a payback track due to the high speeds and danger.

The challenge for TNT is to get on top of the fuel strategies early on and keep that as the story. Races here have featured the leaders running out of fuel on the final lap many times. With the current green/white/checkered rules in place, fuel may be more of an issue than ever before.

Pictures from MIS are great, but the director has a challenge in following the leader, the ongoing stories and the best racing action. Sometimes, when things settle down, in-car cameras used live have a place at this track.

TNT will again offer RaceBuddy, the live online video companion you can access through the NASCAR.com website for free. TNT also has the million dollar challenge for this race. Simply pick the top ten finishing drivers in order and win a million dollars. NASCAR.com is again the place to sign-up for that contest.

This post will serve to host your comments on the TNT coverage of the Sprint Cup Series from MIS. To add your TV-related comments, just click on the comments button below. This is a family-friendly website, please keep that in mind when posting. Thanks for taking the time to stop by The Daly Planet.
Posted by Daly Planet Editor at 11:17 AM 237 comments: 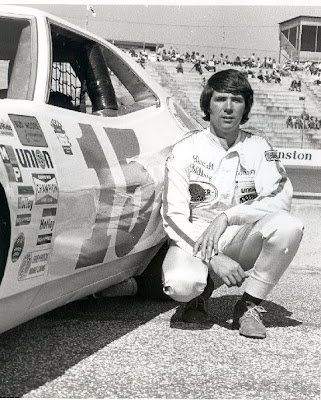 Kyle Petty has been a welcome addition to the two-hour Sprint Cup Series pre-race show on SPEED called RaceDay. Taking over for Jimmy Spencer, Petty turned the show into an open and honest discussion of various NASCAR topics.

Now, Petty is off for six weeks working on the TNT telecasts. SPEED tapped Spencer to return for Pocono and New Hampshire, but it was the announcement that Darrell Waltrip would step-in for the other four shows that raised some eyebrows.

Traditionally, Waltrip has gone away from the sport after the FOX portion of the Sprint Cup Series was done. Elliott Sadler has taken over Waltrip's role on Trackside for the past couple of years. Jeff Hammond has taken Waltrip's place in the TV booth as SPEED covers Cup Series practice and qualifying.

Now, Waltrip is back. He is also back on Trackside and in the TV booth for those four weekends. While those are familiar roles, RaceDay is not. This program is a mix of outdoor weather, raucous crowds and controversial topics.

Part of Spencer's demise was his often cutting and sometimes outrageous comments on RaceDay. On topics from Dale Earnhardt Jr. to Joey Logano, Spencer never minced words. Unfortunately, he sometimes went to extremes in the words that he chose to use.

Waltrip is walking into two hours of unscripted opinion. He is joining a partner who has a tired act of lecturing the TV audience and playing to the crowd with over-the-top antics. Kenny Wallace is going through what Spencer went through last season.

Two rising stars in NASCAR TV are Wendy Venturini and Hermie Sadler. They have moved from two RaceDay reporters who roam the garage to two sharp TV anchors who have their own infield set. This duo provides the vast majority of the credible news content for the two hours.

The role of Waltrip and Wallace on RaceDay will be to provide opinion on the topics offered by host John Roberts. Over the years, Roberts has become a total professional at apologizing. Fortunately, that has changed since Petty has come on the program. This season, Roberts has been smiling a lot.

Waltrip has experienced a tough couple of months on FOX. He positions himself as a spokesman for the sport even while playing favorites. In one breath he declares the Daytona 500 as the best race of the season. That race is on FOX. Then, during the event he calls out for Dale Earnhardt Jr. to pass Jamie McMurray in the final laps. It was raw emotion, he explained.

While the racing action can sometimes dull the pain of Waltrip's comments, there is no such distraction on the two hours of RaceDay. It is simply going to be all DW all the time. While Wallace will have his say, all eyes and ears will be on Waltrip.

Unlike Trackside, where there are guests on the set and four panelists, Waltrip is going to find himself constantly being asked for opinions on topics that he did not select. On RaceDay, things happen live and they happen fast.

Sunday, there will be no Mike Joy, Jeff Hammond or Larry McReynolds for Waltrip. There will only be an existing crew of on-air and production folks who have been working on this series for a long time. In many ways, Waltrip is a very big fish who has suddenly found himself in someone else's pond.

Sunday morning at 10AM ET on SPEED we will all find out just how well Waltrip gets along in his new assignment.

We will use this post to host your comments before, during and after the show on this topic. To add your opinion, just click the comments button below. This is a family-friendly website, please keep that in mind when posting. Thanks for taking the time to stop by The Daly Planet.
Posted by Daly Planet Editor at 12:05 AM 50 comments: