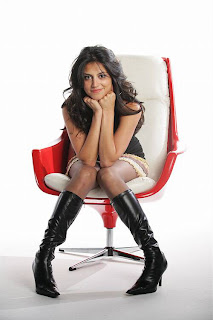 Her name is Melanie, and she has lots of friends. She is the new "promo queen" on SPEED. The question she asks over-and-over again is "can you handle it?" While she asks, she swings her underwear from her fingers. Apparently, she is not wearing any. Then, she slumps in a chair, wearing her big black high-heel boots and her dress that is just a little bit too tiny. How naughty.

One quick check of the watch, however, shows that it is noon on Sunday and families are tuned into one of the top-rated shows on SPEED called RaceDay. Kenny Wallace and Jimmy Spencer are making noise on the SPEED stage while they are surrounded by NASCAR fans. Half of these fans are female, and many of the fans have traveled to New Hampshire as a family.

When the RaceDay crew needs to get the latest news or most important interview, they call on their ace reporter. She is named Wendy Venturini. She has the respect of everyone in NASCAR and is the key to the success of this program.

One quick check of the NASCAR garage shows the prominent role that women play not only behind the scenes, but as one of the strongest demographics that make-up the incredible fan base of NASCAR. They are of all ages, from all over the country, and they value the things in life that most of us do.

This is certainly going to come as news to Krista Voda, who just finished anchoring the infield programming for the Craftsman Truck Series race in Memphis. Voda is one of the most recognized SPEED celebrities because of her years of hard work on the NASCAR trail, and her appearance this season as a pit reporter on NASCAR on Fox. She brings instant credibility to the Truck Series.

Over the years, SPEED has enjoyed tremendous success, and absolutely colossal failures. Presently, their NASCAR programming on the weekends is a vital element to the continuing success of the network. They have managed to craft a block of programming that includes Trackside Live, Tradin' Paint, RaceDay, Victory Lane, and the brand new Survival of the Fastest.

That apparently does not bother Melanie. The camera shoots between her legs as she promotes the SPEED shows. A link on Melanie's SPEED webpage leads fans of any age to another SPEED page called "Fast Dates." The "NOPI chicks" are posed in positions called G-String Straddle, Bare Essentials, Hot Nurse Duo, and Blondes In Lingerie. For less than two dollars, SPEED will send them to your cell phone.

If SPEED wants to continue this type of lifestyle programming, that is fine. There is a place for that category on a twenty-four hour cable sports network. Perhaps, the place for Melanie to lose her undies and wear her mini-skirt is not on Sunday afternoon while NASCAR families wave to the camera while standing around the SPEED stage.

Hey Melanie, take a hike...can you handle that?

The Daly Planet welcomes comments from readers. Simply click on the COMMENTS button below, or email editor@thedalyplanet.tv if you wish not to be published. All email is held in confidence. Thanks again for taking the time to stop by.
Posted by Daly Planet Editor at 12:23 PM 21 comments: