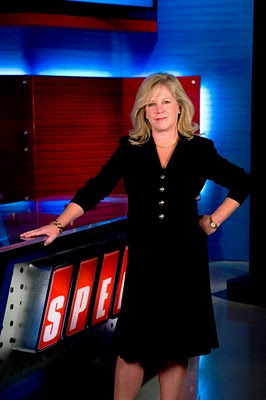 Monday signaled the official start of the era of Patti Wheeler at SPEED TV. In the blink of an eye, a female executive took over both the programming and production departments of this now large and very important cable TV network.

Over the years, we have seen the original SpeedVision be purchased by FOX and moved from Stamford, CT to Charlotte, NC with the intent of becoming a full time NASCAR TV network. That never panned-out for a wide variety of reasons.

New to Charlotte, SPEED settled into a rented studio run by a religious group. Rented office space across the street made for a very interesting network dynamic. These days, SPEED has moved into a renovated facility near the Charlotte Motor Speedway that contains HD studios, production facilities and all the network staff.

Wheeler comes to SPEED as the agent of change representing David Hill, the well-known FOX Sports Chairman and avid NASCAR fan. It was Wheeler who introduced the Australian-born Hill to NASCAR, leading him around what was then her father Humpy's speedway in Charlotte.

Hill fell in love with stock car racing, thought it was under-valued and jumped in with both feet. The result was the establishment of TV personalities like Darrell Waltrip, Larry McReynolds and Jeff Hammond. FOX captured lots of Emmy Awards, helped the sport grow and became perhaps NASCAR's best TV partner in history.

Unfortunately, SPEED was then out of the reach of Hill. The network was controlled by a different division of FOX that ran the cable TV networks. While Hill could strongly express his opinions, the reality was that for many years he was not the executive in charge of SPEED. Now, all that has changed.

FOX Sports has a new young president who has inherited quite a legacy. 38 year-old Eric Shanks takes over the broadcast side of the business. His task is to grow the brands that Hill established for FOX Sports. In the meantime, Hill can turn his attention to changing the one entity that has escaped him. He is now in charge of SPEED.

Wheeler comes in under marching orders from Hill to get the ship in order. While network president Hunter Nickell continues in that position, make no mistake that Wheeler is going to be driving the bus in terms of who does what and how the network looks on the air.

The challenges of SPEED are well-known. On the weekends, NASCAR dominates but is mixed with other motorsports event coverage. The network has carved out a niche with Formula-1, MotoGP and sports car coverage. In addition, stand-alone events and specials like Barrett-Jackson auctions make for a nice mix.

The other shoe drops when Monday rolls around. Nickell's background is regional cable sports networks, so there has been no development of a national morning show. Instead, Sleep Number Bed and Ninja Kitchen System infomercials roll by. Weekday mornings on SPEED are a disaster.

However, it's Monday night at 8PM when the pain really hits for many fans. There is little doubt that one of Wheeler's first tasks is going to be getting the weekday primetime programming in order. Expanding the NASCAR brand into more Monday night programming is a no-brainer.

SPEED's bizarre "lifestyle programming" agenda has featured a towing company, a Texas roadhouse and endless arm-drop hype. This continues even as shows like the US version of Top Gear go to other networks. It's all very strange.

Wheeler's first project was Race Hub. Smartly expanded into an hour at 7PM ET Monday through Thursday, the first cornerstone is now in place to build a viable primetime line-up. Hopefully, one of Wheeler's immediate moves will be to return a West Coast 7PM airing of the program as SPEED originally promised.

SPEED has done a good job of embracing social media and Facebook even as the SPEED website continues to be a mess. Shows like RaceDay, Race Hub, The SPEED Report and others have been building a direct interactive relationship with the viewers.

It should be interesting to see who and what is left standing after an off-season that is destined to bring substantive change to a network that sorely needs it.

To add your comment, just click on the comments button below. This is a family-friendly website, please keep that in mind when posting. Thanks for taking the time to stop by The Daly Planet.