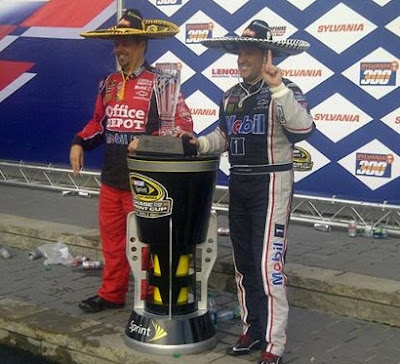 The truck series race on Saturday showed us that it was going to be another case of a single groove racetrack that made it tough to pass. New Hampshire Motor Speedway lived up to that reputation on Sunday as the Sprint Cup Series raced on ESPN.

Nicole Briscoe led a pre-race show that consisted of a lot of content seen earlier in the week on ESPN. Features from the past were re-used on various topics to fill the hour. Rusty Wallace and Brad Daugherty now present a familiar infield TV duo.

Allen Bestwick called the race with Dale Jarrett and Andy Petree in the TV booth. On pit road were Jamie Little, Dave Burns, Vince Welch and Dr. Jerry Punch. Tim Brewer was in the Tech Garage.

This race was a nose to tail affair that made pitstops and track position key to winning. There was little attrition among the top teams and ultimately gas mileage decided the race.

This was a typical ESPN presentation. The core of the live racing is covered by cameras that feature select pairs of cars. Sometimes, there is a single shot while the coverage talks about a designated driver. ESPN had a wonderful aerial shot, but it was used infrequently.

Positives were the nonstop commercial format, the quad-split for caution flag pistops and the effective use of split-screens during the racing. Negatives were conversation among announcers with no one calling the action. This race sounded very different on the radio.

This post is your opportunity to express your opinion about the ESPN coverage of the Sprint Cup Series race from the New Hampshire Motor Speedway. To add your TV-related comments, just click on the comments button below. Thanks for stopping by. 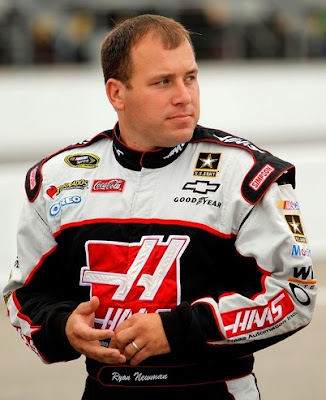 The Fords are nowhere in sight at New Hampshire. The Roush guys are scratching their heads as the other manufacturers dominate. The weather is good, the track is slick and tempers are hot. What a perfect recipe for a good NASCAR race.

Nicole Briscoe will open the TV day with Brad Daugherty and Rusty Wallace alongside from the ESPN Infield Pit Studio. Briscoe has been solid while directing traffic on the air, but Wallace is struggling without a viable partner for conversation in this setting. Daugherty is a NASCAR cheerleader this season and nothing more.

Allen Bestwick will call the race with Dale Jarrett and Andy Petree alongside. As fans saw with ESPN's Chicagoland coverage, Bestwick is sometimes limited in his ability to call the race by the pictures selected by ESPN. Perhaps today Bestwick will be able to look out the window instead of only at the TV screen.

On pit road are Jamie Little, Dave Burns, Vince Welch and Dr. Jerry Punch. In this New World Order of NASCAR where few cars experience mechanical troubles and passing is limited, the role of the pit reporter had been diminished significantly. It should be interesting to see if this tough and very flat track changes that for one race.

Tim Brewer is in the Tech Garage and is completely out of things to say. He almost seems resigned to his fate as he repeats the same basic points over and over again. Brewer has a lot more to offer, but the Tech Garage has lost its magic.

ESPN has a signature style of showing races called "hyper-tight." Once the start or a restart is over, the director immediately begins the process of tightening the camera views until they are tight shots of one or two cars. ESPN said this approach works better for HDTV viewers, unfortunately it misses most of the racing.

New Hampshire Motor Speedway is a pot that boils over about halfway through the race. Contact is going to happen, unless the field simply strings out and uses pit road for track position. In the Camping World Truck Series race on Saturday, only six trucks finished on the lead lap.

This post will serve to host your comments about the NASCAR on ESPN coverage of the Sprint Cup Series race from New Hampshire. To add your TV-related opinion, just click on the comments button below. Thanks for stopping by.