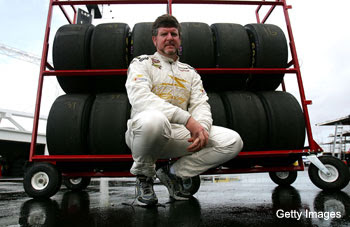 When it was announced in June that Randy LaJoie had failed a NASCAR drug test while working as a spotter at the Charlotte Motor Speedway, ESPN was quick to respond.

LaJoie had been working for the network in a variety of roles for several years. The same day that NASCAR suspended LaJoie indefinitely, so did ESPN. At the time, only NASCAR had a clearly defined pathway for LaJoie's return.

Wednesday, the sanctioning body made it official:

Randy LaJoie has been re-instated by NASCAR for competition following completion of a NASCAR-approved treatment program and the satisfactory fulfillment of all requirements for reinstatement.

Since the start, LaJoie has taken full responsibility for his actions. He continued that theme with his statment after being reinstated:

"I am thankful to NASCAR for reinstating me for competition and grateful to my friends and family who supported me through this time," said LaJoie. "This has been a tremendous learning and growing process for me and I have come through it a stronger, better person. I am looking forward to returning to work and continuing to prove to NASCAR, my colleagues, my family and my friends that this was an isolated incident that I have put behind me."

ESPN's road to recovery is a bit different. LaJoie never failed an ESPN drug test and his suspension from the network was a bit of a shock. Simply keeping LaJoie on the sidelines while he went through the NASCAR program might have made a bit more sense.

If there is any network that needs some more characters on TV, it's ESPN. LaJoie's presence on NASCAR Now's Monday shows brought some honest talk with some laughs along the way. His veteran perspective on safety issues came into play time and time again. LaJoie has a value to ESPN where NASCAR is concerned.

Since ESPN took over both the Sprint Cup and Nationwide Series coverage, it has used Dale Jarrett and Andy Petree in the booth to work practice, qualifying and the races for both series. One announce team is doubling-up.

In the past, LaJoie was used to work some stand-alone Nationwide Series races. The results were outstanding, especially when teamed with Bestwick. Those two brought out the best in Rusty Wallace. This was especially true when LaJoie led the charge to kid Rusty about his Nationwide Series teams and his son Steven's colorful driving style.

There is a long way to go this season and Jarrett and Petree need to focus on the Sprint Cup Series, the upcoming Chase and the quality of the telecasts. Having these two work both series, including practice and qualifying leaves the Nationwide Series out in the cold.

Like two good relief pitchers, LaJoie and Ricky Craven have been warming up in the ESPN bullpen for several years now. Craven's recent performance in the TV booth working as an analyst on a Nationwide Series race was outstanding. It just might be time to get a second team focused on the Nationwide Series out into the field.

Let's hope that ESPN follows the example they set back in June when taking NASCAR's lead and this time brings LaJoie back to actively working for the network. He has satisfied the NASCAR requirements, completed a treatment program and admitted the incident.

We all have moments in life we would like to have back. We all have times we wish we had acted differently. Now is the right time for ESPN to step-up and reinstate LaJoie.

We welcome your opinion on this topic. To add your comment, just click on the comments button below. This is a family-friendly website, please keep that in mind when posting. Thanks for taking the time to stop by The Daly Planet.
Posted by Daly Planet Editor at 11:00 PM 38 comments: 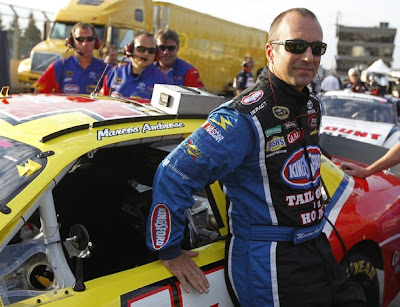 The Nationwide Series is on the road course in Montreal. A very diverse field of drivers is taking the green as usual. Road course specialists are mixed with Nationwide Regulars and some Sprint Cup Series drivers.

This year there is no rain in the forecast and that should dramatically change the telecast. The pre-race duties will be shared among the pit road reporters Mike Massaro, Shannon Spake and Vince Welch.

Allen Bestwick will call the race with Rusty Wallace and Andy Petree alongside. ESPN offered practice and qualifying coverage which showed the wide range of road course experience in the field.

Road course racing has been good for the ESPN crew. Watkins Glen was a fantastic presentation and this should offer a solid showcase for the series before it begins to be sandwiched between college football games on ESPN2.

This post will serve to host your comments on the ESPN2 coverage of the Nationwide Series from Montreal. To add your opinion on the telecast, just click on the comments button below. This is a family-friendly website, please keep that in mind when posting. Thanks for taking the time to stop by The Daly Planet.
Posted by Daly Planet Editor at 1:12 PM 161 comments: