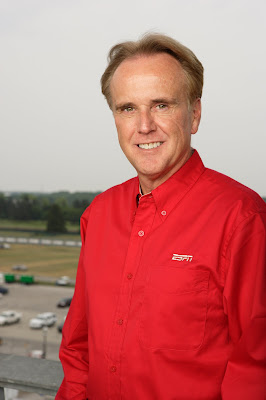 The Nationwide Series takes to the air on Friday night on ESPN2 immediately after a live NBA Basketball game. Hopefully, things will go smoothly during the transition.

Here is the scoop on the race from ESPN:

"ESPN2 continues its season-long coverage of the NASCAR Nationwide Series with a live, flag-to-flag primetime telecast of the 200-mile race from Phoenix International Raceway Friday, April 5, beginning at 9:30 p.m. ET with NASCAR Countdown. The telecast is presented by Cici�s Pizza. ESPN2 is the home of the NASCAR Nationwide Series all season, with selected races on ESPN and ABC."

"Allen Bestwick will host NASCAR Countdown with analysis by Jarrett and Brad Daugherty, a former winning team owner in the NASCAR Nationwide Series and NASCAR Craftsman Truck Series, in the ESPN pit studio."

There we go, the crew is in place and the changes are Marty Reid in for Jerry Punch and Vince Welch in for Shannon Spake. Reid is a veteran, and it should be interesting once again for him to work with Jarrett and Petree. The downside is that there are lots of brand new faces for Reid to deal with in this series.

This post will serve to host your comments as ESPN2 presents the Nationwide Series race from Phoenix International Raceway. To add your comment, simply click on the COMMENTS button below and then follow the easy instructions. The rules for posting are on the right side of the main page, and thank for stopping by.
Posted by Daly Planet Editor at 7:52 PM 117 comments:

Friday before the Nationwide Series race on ESPN2, there are several hours of NASCAR action on SPEED.

At 5PM, SPEED covers the Nationwide Series qualifying session that is scheduled to last ninety minutes and go directly into the first Friday Sprint Cup practice at 6:30PM.

There are two sessions, and SPEED will carry them both with a flexible version of NASCAR Live with John Roberts in between. That should be around 7:30PM. The final session cranks-up at 8PM and continues for one hour. SPEED then turns-over the NASCAR action to ESPN for the Nationwide Series race.

This post will serve to host your comments about the Friday NASCAR programming on SPEED from Phoenix. To add your TV-related comments, please click on the COMMENTS button below and follow the easy instructions. The rules for posting are on the right side of the main page. Thanks again for stopping by The Daly Planet.
Posted by Daly Planet Editor at 4:45 AM 37 comments: